The Chicano movement in the late 1960s, known as El Movimiento, found its home at UC Santa Barbara with the creation of the El Centro Annex building, giving Chicanx students and their allies a space where they could express their shared identities and experiences. 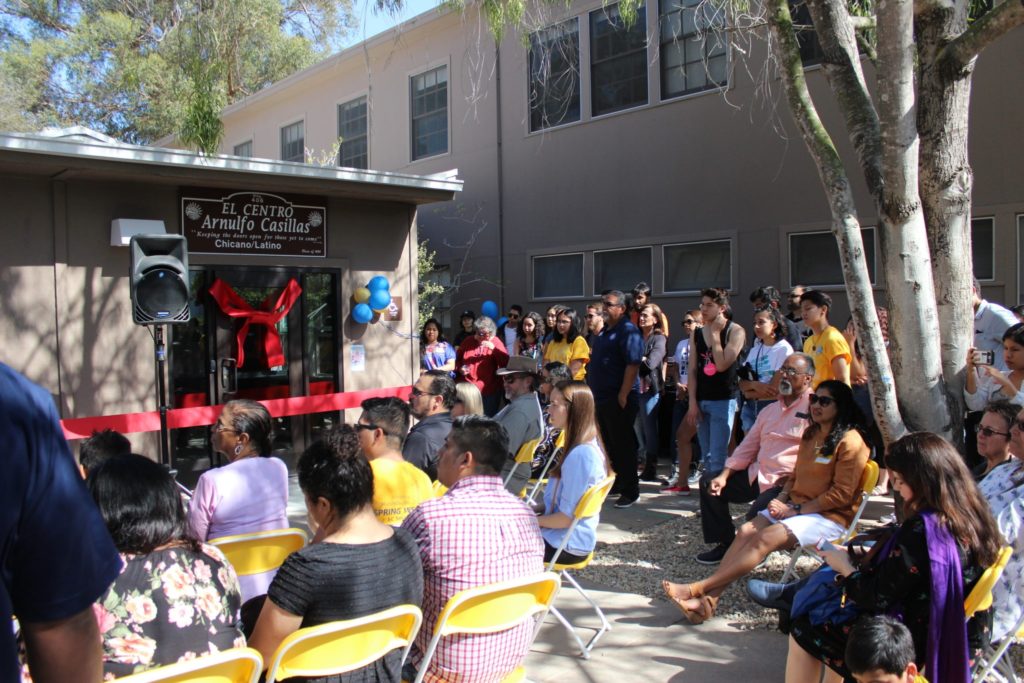 As previously reported in Jan. 2017, occupants of the building received a 45-day eviction notice for the demolition of the building due to structural issues, including insect infestation, poor ventilation and structural damage that made the building highly unstable in the event of an earthquake. Jose Ochoa / Daily Nexus

Last Saturday — after nearly a year of fighting against the demolition of the building — students, community members and UCSB staff and faculty came together for the reopening of the renovated El Centro Arnulfo Casillas building.

The open house celebration started with a ceremonial song and blessing by Chumash elder Marcus Lopez.

“This center is to celebrate the new vision of the world that we are going to live in,” Lopez said.

He said the reopening shows that “tradition can break the master narrative” of historical colonial power over people of color and that the students, community and everyone involved in El Centro will redefine what the new narrative is.

“I’m happy to see and to be here and to give you that message through these ancient songs,” Lopez said.

In commemorating the students for their work in saving El Centro, Lopez said “this is your strong hold, make it wise, make your connections with what you need to connect.”

As previously reported in Jan. 2017, occupants of the building received a 45-day eviction notice for the demolition of the building due to structural issues, including insect infestation, poor ventilation and structural damage that made the building highly unstable in the event of an earthquake.

After the eviction notice, students and alumni voiced their frustration toward the administration and continually fought for the permanency and improvement of the building, according to Shahryar Mooraj, a member of the El Centro committee and fourth-year mathematical science and physics double major.

“As students, we came together to stop that and to fight for the history and the culture that has been built in that space over time and to ensure that El Centro has a permanent physical space on campus,” Mooraj said.

“Keeping the doors open for those yet to come,” is written on the sign hanging over the front door entrance.

The reopening ceremony commemorated past and present students and faculty that have fought for the fruition and continuation of El Centro through decades of social justice work, community resistance and grassroots organizing so future students of color can feel they have a space at UCSB.

“I was one of the students who lead the negotiation for the rebuilding process in the El Centro committee,” UCSB alumna Damaris Adame said.

Adame said the day they were served the eviction which “essentially condemned” and made “immediate evacuation” necessary on Jan. 9, 2017, feels like “decades ago [rather] than just last year.” But it was last year when we as students were told that the temporary building 406 was essentially condemned and our immediate evacuation was necessary,” Adame said.

According to Adame, they were asked to “remove the art, the decades of posters, murals and designs” that mark student protests and struggles that were born and grew out of El Centro, but they were also asked to abandon “the safety [they] had created within these four walls.”

Adame said that the students El Centro carry with them, the Chicanx movement of MEChA, the hunger strikes of 1988 and 1994, and more movements uplifted them.

Congressman and UCSB alumnus Salud Carbajal and Chancellor Henry T. Yang were present at the ceremony along with Ozzie Vargas, director of the Educational Opportunity Program and representatives from Counseling and Psychological Services. Many Chicano/a studies department faculty and Associated Students (A.S.) officials were also present.

Event organizer, Yaneli Gutierrez, distinguished A.S. executive director, Marisela Marquez as a staff member that has been a supporter of El Centro since her time as a graduate student on campus.

Marquez told the story of the day she first visited El Centro in 1988. She said “it was the first time I had exhaled in three years.”

“In the early years, I watched [students] negotiate and sell M&M’s to actually create the first La Raza college day,” Marquez said, referring to when El Congreso, one of El Centro’s organizations, brings high school and middle school students of color to campus to introduce them to how higher education works.

Marquez said the Chicanx and Latinx student population has gone from approximately 12 percent to over 25 percent and credited El Centro as a main reason for UCSB’s effectiveness as a Hispanic Serving Institution.

Marquez emphasized that past and present generations of students have created a space where future students will retain what El Centro has to offer.

“Without [the students’ work] we wouldn’t be standing here. Its known that the next generation of students are right behind you and they’re taking it to heart,” Marquez said.