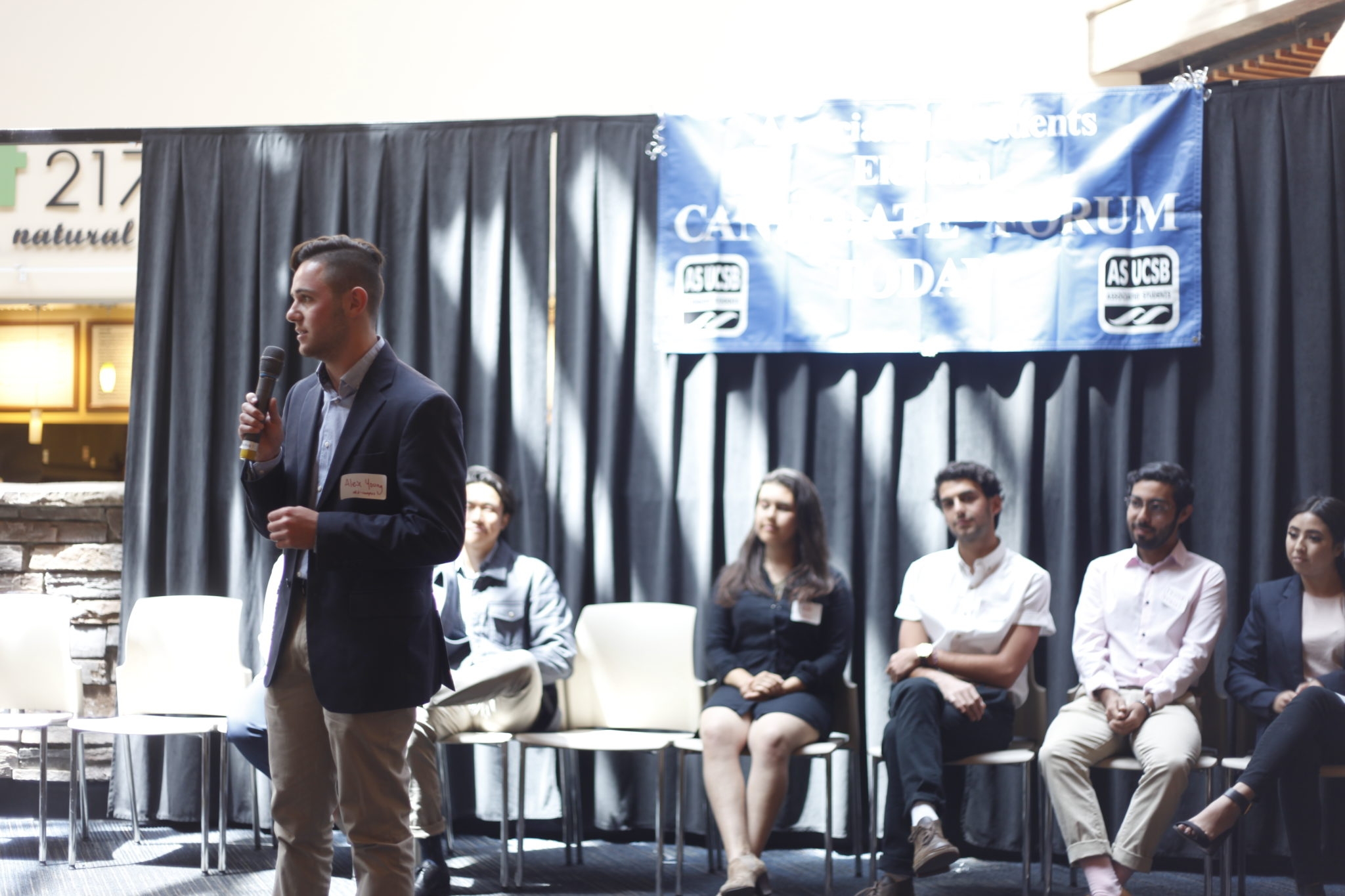 Candidates running for the position of off-campus senator presented their platforms during a forum on Monday. Lianna Nakashima/Daily Nexus

With campaigning for Associated Students elections underway, candidates for A.S. Senate extended their platforms Monday at The Hub, pointing to their own experiences and calling for unity between the oft-divided campus parties.

Students can vote for A.S. elected officials starting April 23. Official slates for the 2018-19 A.S. Senate can be found here.

For the most part, candidates for both Campus United (CU) and the Isla Vista Party (IVP) converged on issues at the official forum, agreeing on topics like safety in I.V., keeping tuition and student fees at a minimum and voting for Measure R, which would fund the I.V. Community Services District.

There were few points of tension, but the candidates did take different approaches when it came to discussing a fee initiative that would fund a controversial University Center renovation. While IVP candidates criticized the project’s proposed use of student fees, CU’s batch of A.S. hopefuls said students themselves should be the main deciders of whether the plan is best for them.

Monday’s questions, written by both A.S. Elections Board and submitted anonymously by audience members during the forum, included topics about I.V. safety, the proposed NewCen project, I.V. governance and other off-campus issues.

Candidates’ responses to these questions and overarching goals are summarized below:

Ashley Ng, an IVP candidate, said equipping Community Service Officers with official school vehicles would be a good way to ensure safety for I.V. residents. To CU candidate Sydney Karmes-Wainer, an off-campus CU candidate, the most important changes needed are the most visible and tangible ones, which she said take shape in facilities that need better upkeep.

CU’s Amy Zhou said redrawing inefficient parking lines would be first on her agenda, while her partymate Mordi Shadpour said his main goal was making the area “very safe for everyone and welcoming to students from all walks of life.” He cited his work with UC Santa Barbara Life of the Party in promoting safer alcohol and drug use in I.V.

Salvadore Hernandez Arellano of IVP noted that ramping up the use of blue lighting and decreasing police presence in I.V. would help make the community safer.

CU’s Adam Chohan didn’t mention a specific action, but rather said his first line of action would be to talk to the people he’d be working to represent.

Jasmine Palmerin of IVP said her main focus is to create a safer I.V. by lighting up dimmer areas and installing emergency blue lights throughout I.V. that have call buttons to contact local law enforcement. With her experience as a volunteer for the Women’s Center, she believes sexual assault hasn’t been acknowledged in I.V. and is something she will focus on as senator.

IVP’s Christian Ornelas said he wants to work toward addressing the mold problem in I.V. housing. He said he will work toward getting units better ventilation by talking to landlords and opening up tenant-to-landlord communication. Ornelas supports Measure R, which would fund the CSD, in order to address tenant and landlord mediation.

Dallin Mello of IVP said he will create a commission that bridges connections for student workers and the City of Santa Barbara. Mello said student workers have different needs than most students, and he hopes to build opportunities for them. In response to a question about differences in political beliefs, Mello said, “just because we don’t see eye to eye, doesn’t mean we can’t work together.”

CU’s Nicole Estess hopes to work with the CSD and I.V. Foot Patrol to integrate more lighting in I.V. and work as a mediator with local law enforcement. Estess currently works in with the EVPSA office lobbying for UC funding.

Alexander “Alex” Young of CU, said he will focus on I.V. and UCSB sustainability as well as opening up communication with his constituents. He said he is also in support of Measure R to fund the CSD. In response to his support for the NewCen project, Young said, “it’s up to the student themselves if their fees should be used for the UCen.”

CU’s Andrew Nguyen said that creating online forums for A.S. committees will build communication between A.S. and the student body. In response to the question about the NewCen project, Nguyen said he sees that “it might be a long-term investment.”

Yara Khamis of CU will strive to open up more means of communication to build “a stronger community,” especially between permanent residents of I.V. and students. She wants to improve the way sexual assault is addressed in I.V. and is a supporter of Measure R.

IVP’s Ryan Clark said he wants to make Gaucho Care more inclusive and help improve the quality of parks in I.V. Clark wants to work toward making sure that sexual assault cases reach the appropriate authorities and have more students involved in community based policing.

Jalia “Jolly” Carlton-Carew of IVP said she will strive to create a web-series show about Isla Vista “to craft our own narrative to tell our own story.” She believes the NewCen should not come from student fees, but that the university should allocate that funding and “we shouldn’t have to pay for things that we should already be provided.”

Carla Cernat of CU wants to create more community based policing and implement restorative justice-based programs for students. She hopes to extend C.A.R.E. workshops and sexual assault training to all students, not just fraternities and sororities. Cernat also wants to increase safety in I.V. and believes she has done so already in helping create the Sun Fest, an alternative Deltopia activity for students.

CU’s Zachary Zeising, sustainability chair of his fraternity, said he wants to push for safety and environmentally friendly systems in I.V. He specifically wants to install an emergency blue light system in I.V. to help create faster responses to sexual assault incidents.