The Daily Nexus
Student Gov
Justice Dumlao for Associated Students President
April 19, 2018 at 12:01 am by Daily Nexus Editorial Board

As the face of the association, the Associated Students president must be a leader who can understand the diverse student body at UC Santa Barbara and work to create tangible projects intended to serve all students. 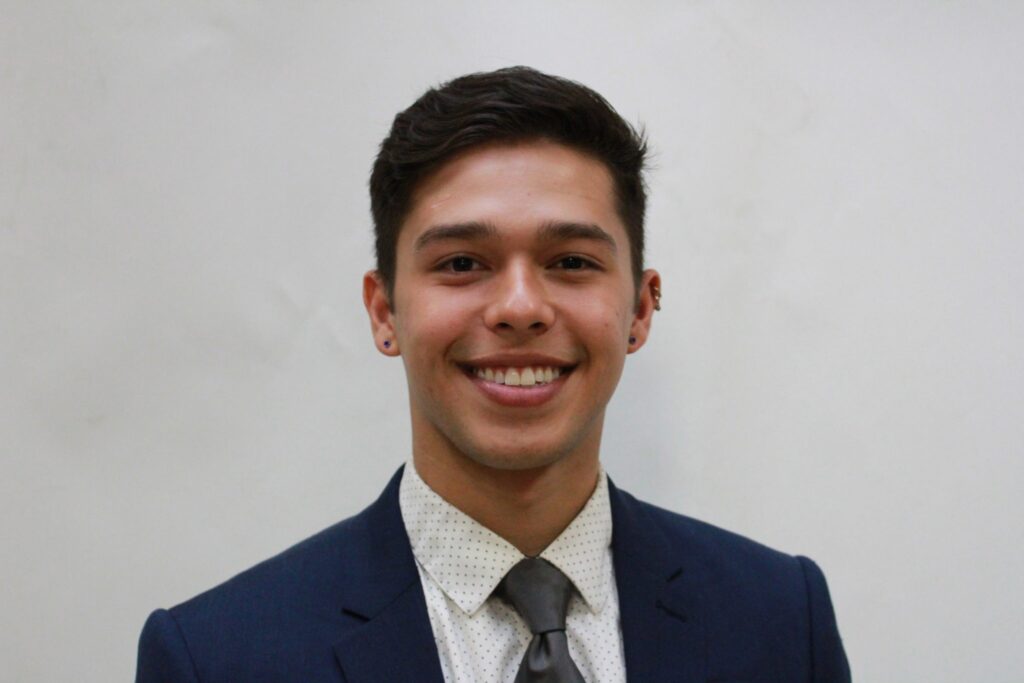 Dumlao understands the importance of putting student money to good use. His plan for a fiscal accountability task force would reallocate unused student funds for projects within A.S. and, if Dumlao follows through, could help ensure students’ money is not wasted. Jose Ochoa / Daily Nexus

With experience working with different groups on campus and a firm set of goals for his time as president of the association, Justice Dumlao demonstrates the leadership qualities that could improve A.S. from the top down.

Dumlao has served as the co-chair of the A.S. Queer Commission, diversity education coordinator for the Resource Center for Sexual and Gender Diversity (RCSGD), a board member of the Student Affairs Student Council and a director for the Coalition for a Better UC.

The candidate’s experience working in all corners of campus demonstrates his ability to communicate with both students and administration.

Dumlao, a third-year global studies major, has a dedication to making A.S. more accessible to all students in a tangible way; he proposes hiring presidential liaisons from various communities on campus to work directly with his office.

Dumlao also understands the importance of putting student money to good use. His plan for a fiscal accountability task force would reallocate unused student funds for projects within A.S. and, if Dumlao follows through, could help ensure students’ money is not wasted.

The Nexus is also interested in Dumlao’s idea to reform UCSB students’ healthcare.

Dumlao wants Student Health to accept all major insurance providers, as he said the service currently only accepts Gaucho Health Insurance. Through Dumlao’s plan to incorporate UCSB into the UC Health system, more students will have access to Student Health services, regardless of their insurance plan.

While Dumlao is an advocate for empowering student voices within the association and has long-term goals like healthcare reform, the candidate also understands the day-to-day lives of students on campus.

Dumlao’s proposal to create community study spaces in the library would provide a location for students of shared majors to study and communicate, which he said will facilitate more dialogue among the student body.

While vague in its implementation, Dumlao’s eagerness to create small- and large-scale change on campus is admirable in a presidential candidate, especially with a term limited to a school year.

Brooke Kopel, Dumlao’s opponent running with Campus United, is qualified for the job of president with her experience as an L&S senator and an apparent dedication to equality for students.

Yet Kopel’s primary concrete plan for a natural disaster relief program, while well-intentioned in its structure, does not compare with Dumlao’s presentation of multiple feasible ideas and projects.

Dumlao should also remember to carry himself with the dignity of his position, as his conduct in opposing ideas he disagrees with has a strong possibility of causing rifts within the organization.

Dumlao has ambitious goals and a series of plans for tangible projects, but the Nexus would like to remind the candidate to remain inclusive of all perspectives as the leader of the student body.

The wrong fucking call. The fact that you all didn’t endorse Brooke Kopel baffles me. Another reason why the Daily Nexus reporting has no substantial bearing on most issues facing this campus.

Damn who hurt you anon

This comment definitely didn’t come from the CU campaign team. Definitely not. Nope.

The CLEAR option for AS President, Justice has the experience and backgrounds to connect the collection of several identities on campus that so desperately seek the platforms they deserve to voice their concerns. He is incredibly well quailifoed for this position.

Good broke hasn’t done anything ever

Coming from someone who doesn’t know how to spell ‘Brooke’

My bad I meant to type supporter of ethnic genocide

Justice is THE choice for president. He actually has experience in grassroots organizing while Brooke is stuck in her AS bubble. She’s not approachable by the average student, whereas Justice makes himself approachable.

So Justice ran to be EVPLA last year, did not get the DailyNexus endorsement, and also lost the race pretty badly. He Is now running for President, a position that requires a greater deal of experience and temperance and somehow got endorsed even though he did not do anything since he last lost his election?

What the hell are you talking about? Justice is part of Coalition for a Better UC and has been working on reducing tuition and improving student services. Everyone involved in the campus community knows that. You would too if you paid attention to the campus climate beyond when one of your frat bros wants to pad their resume.

I would also like to add that Justice faced a concussion during his campaign last year after he was in a fatal accident on the FIRST day of campaigning. Losing a race when your partially unconscious can hinder your ability to continue a campaign. Regardless, his involvement in the RCGSD, working with undocumented students, CO-FOUNDING the Coalition for A Better UC which aims to extend the CALGRANT across the UCs and in higher education, and organizing with many other organizations on campus AFTER he lost his election just shows what a community leader looks like with or without the spotlight… Read more »

Justice openly mocks Conservatives on this campus. He will restrict funding for events for Republican speakers. Not a good idea.

What are your sources? Lmao

I really hope he wins, he is the embodiment of what an as president should be. He cares for others and I am glad he doesn’t support the funding of the new UCen to be paid by the students. Some of us are barely making ends meet and CU is crazy if they think we want to pay for this additionally. Where are we supposed to get the money from? many of us are broke/in debt as it is!!!!

Congratulations Justice, your efforts as a student, student leader, and organizer only inspires myself as a senator* to further the push towards administrative and student-lead effort collaboration… I LOVEEEE YAAA
*Title used for identification purpose only

A Friend
Reply to  Alexandra Gessesse

This is incredibly extra ROTFLMAO.

But ya, go justice

Justice seems cool but it would be nice if candidates and the Nexus did their research before supporting/calling for infeasible projects such as incorporating UCSB into the UC Student Health System. It seems that many on the campus are not aware that UCSB used to be part of the UC Student Health System but chose to leave in 2013 when UC SHIP decided to restrict students access to prescription drugs to $10,000 and total university benefits to $400,000. The GHI plan was made for students to be able to have accessible insurance that did not have maximums for medical services.… Read more »