The Daily Nexus
Tennis
Blue-Green Rivalry Renewed in Winner-Takes-All Final Match of the Reg. Season
April 19, 2018 at 5:06 am by Brandon Victor 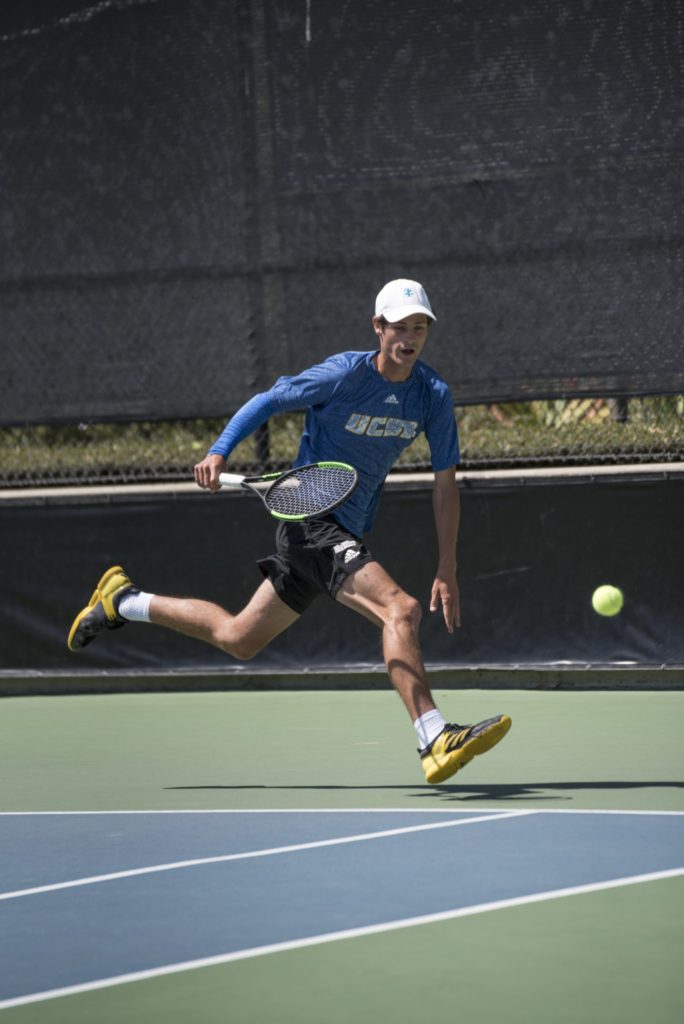 UCSB men’s tennis team can do no wrong lately — they have won seven games in a row, including three victories on the road. In their four conference victories, they have yet to give up a single point to their opponent.

Saturday, they will put their season on the line in a winner-take-all matchup against an unexpectedly superb Cal Poly team that has won five games in a row.

Both teams enter the match 4-0 in the conference, meaning the stakes couldn’t be higher. Winner takes the regular season conference title and the top seed in the Big West tournament, while the loser must settle for the second seed.

“I feel we’re beginning to peak at the right time, with all of our biggest matches in front of us,” Gaucho Head Coach Marty Davis said.

Last season, the Mustangs finished ranked No. 49 after an 18-8 season, the most wins in school history. With a victory over the Gauchos, the Mustangs would tie that record, putting their overall record at 18-5 heading into the Big West tournament.

Statistically, Cal Poly seems to have a strong advantage playing at home — on the season, they are 11-0 at home, while UCSB is only 3-5 on the road. However, most of those losses came earlier in the season, when Santa Barbara was struggling to find its identity. Additionally, UCSB holds the all-time record against Cal Poly, winning 19 of the 32 matches the two sides have played.

“I’m interested to see how we play in front of a hostile environment,” Davis said. “I know we’re going to be up for the test.”

In order to mitigate home-court advantage, Santa Barbara will have to win the doubles point — something that hasn’t been Cal Poly’s strong suit this season, particularly at the No. 1 spot. On the season, the Mustangs are just 7-9 at that spot; therefore, juniors Nicolas Moreno de Alboran and Anders Holm will look to pick up one of the two victories necessary for the doubles point.

Similar to the Gauchos, the Mustangs are a top-heavy squad when it comes to singles play. Junior Josh Ortlip has dominated opponents at the one spot, winning 14 of his 18 matches and riding a four-game winning streak heading into the match. Moreno de Alboran, who remains unbeaten in his last seven matches and is ranked 80th in the country, will have to be on his A-game in order to get the victory.

Likewise, Australian junior Dominic Bechard has won 11 of his 13 matches on court two, posing a threat to UCSB sophomore Joseph Guillin, who has only lost two matches the entire season. The top two courts will likely be the deciding factor on Saturday, so Guillin will have to keep his hot hand if the Gauchos are to win.

Where the Mustangs have stumbled, however, is at the bottom two singles courts. On court five, Cal Poly has a 9-9 record on the season, while on court six they are 10-7. These numbers pale in comparison to the team’s overall record, and will likely provide the Gauchos’ best opportunity to pick up points.

However, UCSB has also been inconsistent, especially at the number six position. On court five, freshman Victor Krustev has stepped up despite his age, winning his last two matches in straight sets. What remains to be seen, however, is who will play at the number six position for UCSB. After struggling earlier in the year, junior Hironori Koyanagi dominated in his last match, while senior Chase Masciorini picked up an easy victory on court six following a one year layoff of playing tennis. No matter who plays, Santa Barbara will need those points in order to have a cushion if their top players slip up.

There’s no doubt UCSB has the talent to keep up with Cal Poly — they’ve proved that all year. On the road, with the regular season title on the line, they will need to display that talent — along with the poise and confidence they’ve had of late — in order to celebrate a title in SLO.

The Gauchos will take on Cal Poly at 10 a.m. on Saturday at the Mustang Courts.