The Daily Nexus
News
Students Exchange Views on ‘Olé,’ Consider New Mascot or Rebranding
April 17, 2018 at 12:07 am by Jose Ochoa

UC Santa Barbara students gathered on campus last Friday to discuss the possibility of rebranding or altogether changing the university’s mascot which some have considered a caricature of Argentinian people. 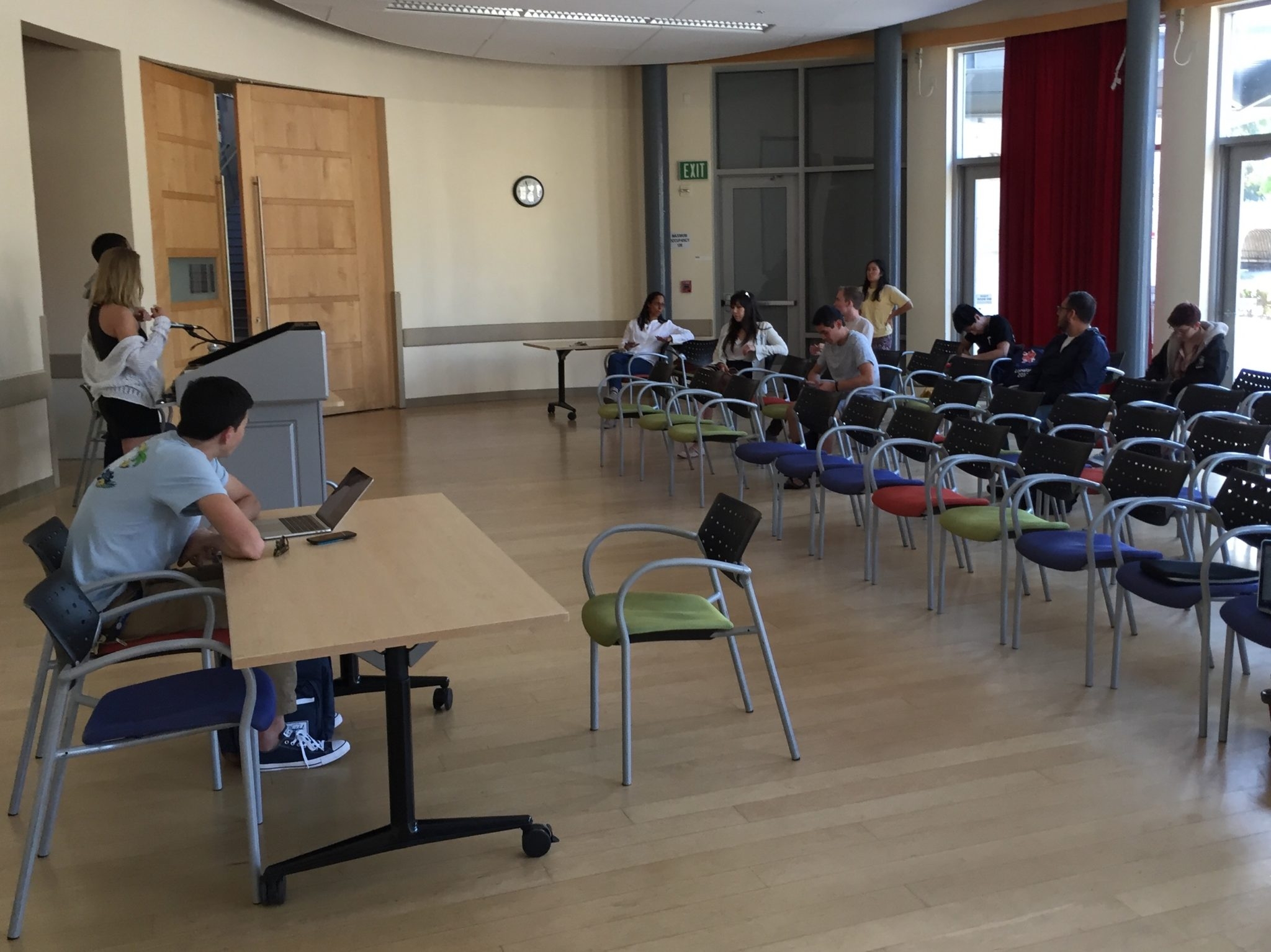 About 20 students gathered at the Student Resource Building’s multipurpose room to discuss their issues with UCSB’s current mascot, the gaucho, or an Argentinian cowboy. Students expressed concern that UCSB negatively represents Argentinian people by using caricaturesque features like a mask and grimacing face on “Olé,” the mascot that appears at UCSB sports matches.

Ani Vahalia, second-year biology major, said during the town hall that explaining the university’s current mascot to other people is “really awkward” because it appears to be representing a “racial trope.”

Vahalia said that, considering a significant part of the student population is Hispanic, the problems with Olé and UCSB’s tradition of throwing tortillas at soccer games are “kind of obvious.”

“Why is that our mascot? Is it any better than… the Redskins?… A lot of our student population are people of color who have dealt with slurs and awkward representation,” Vahalia said.

Hailey Phelan, a fourth-year global studies major and one of the event’s organizers, said that many people have recommended replacing the gaucho with a raccoon, but said the word “raccoon” itself can contain a slur which could also become problematic in the future.

According to the university’s athletics website, the university settled on the gaucho as its nickname in 1936 after the female student population voted to change the mascot from the roadrunner because of the 1927 film “The Gaucho.”

In the 1980s, “Gaucho Joe” became an iconic figure in cheering on the team at basketball games, and in the 1990s basketball fans became famous for throwing tortillas on the court during games.

According to the athletics website, the tortillas “often stopped play and resulted in technical foul calls against the Gauchos.” In 1997, UCSB’s basketball coach was ejected from a game against the University of the Pacific after failing to control the tortilla-throwing crowd.

One student showed support for the current mascot and said he does not see the gaucho as an offensive figure, but rather a symbol of values from a distinct set of people.

Cristian Zapata, a third-year biopsychology major, said that as someone of Argentinian heritage, he does not believe the gaucho is “racist.” Zapata said gauchos are a group of people “represent[ing] freedom and virility” and should be seen as a unique subculture — a group of people who chose not to adapt to modern lifestyles and live in the rural countryside.

He also said that the name Olé is fitting for UCSB because the commonly-used phrase is a part of the prominent soccer culture in both Argentina and the university. Zapata said that gauchos eat a form of bread similar to the tortilla, making UCSB’s sports tradition very fitting.

Leanne Friedrich, a graduate student studying materials in the engineering department, said regardless of whether the mascot is verifiably “racist,” students’ interpretation of the mascot as such is “completely distracting.”

Phelan suggested the possibility of keeping the gaucho as a mascot but rebranding its imagery to be historically accurate by dressing the mascot in appropriate clothing, perhaps portraying them on horseback.

She said the main difficulties in changing UCSB’s mascot rest on the financial impact a rebranding could have on the university, specifically on its intercollegiate athletics departments.

According to Phelan, the athletics department has said the university’s mascot needs to be intimidating to other sports teams, explaining Olé’s aggressive appearance.

Samantha Stopol, a fourth-year economics major, said she believes the gaucho is a folk hero in South America and a proud figure but said she believes Olé should be redesigned because the mask he wears makes him look like a criminal and provides a negative image.

Phelan also said many of the university’s online domains such as GauchoSpace would also need to be renamed and relicensed.

In addition to the athletic and financial repercussions that a mascot change could have, Phelan noted that alumni feel an attachment to the Gaucho name, which should be considered when proposing a change.

Katya Armistead, Dean of Student ife, also spoke about student’s perception of the mascot and suggested students tie values they respect to the mascot, regardless of whether it is changed in the future.

The event’s organizers Phelan, Mario Infante, a fourth-year computer science major, and James Ferraro, a first-year history major, said they held Friday evening’s town hall in order to facilitate the discussion around the current mascot but were not advocating for a specific change.

Correction: Ferraro is a first-year history major, not a history of public policy major.

Gauchos are not just from Argentina… somehow it is forgotten that they are Californian too, and won a few battles versus the US occupying forces in 1846-1847. One way to view El Gaucho: honoring the Spanish and Mexican heritage of California.

True, especially the Mexican part. It’s sad to see the Mexican contribution to the state is always forgotten especially now when people use pan-ethnic terms like Latino/ Hispanic. It’s o.k. to use the term Mexican. Viva Mexico, Cabrones.

10 Percent State Taxes is roughly a full month and a half of your work pay per year that if you lived in another state you wouldn’t have to pay. Democrat or not, the system is broken, and Racoon is a bad idea for a mascot. How about Isla Vistans?

There once was a time in the US when college students led the antiwar movement. Instead, student activists are going over these historical framing issues. Does this mean the plan of getting rid of the draft was all that was needed to make college students stop caring about their government waging wars of aggression all over the world?

First year ethnic studies majors are not driven enough to actually make any change on the UCSB campus, as reflected by their choice in degree. Perhaps they should have majored in Econ instead such that they would realize that their efforts to actually change the Gaucho comes at a large opportunity cost by not being more politically active on a topic far more impactful.

Those that are capable of making changes are either 1. Attached to the Gaucho name or 2. Don’t give a shit and don’t want to waste their time.

If I recall correctly, in the 70s we wanted to re-name ourselves “tar feet” as we always returned from the beach with tar on our feet. The idea was nixed by the administration due to costs.

We all know how racist this school is. Thankfully white babies will be the minority being born in America starting in 2020.