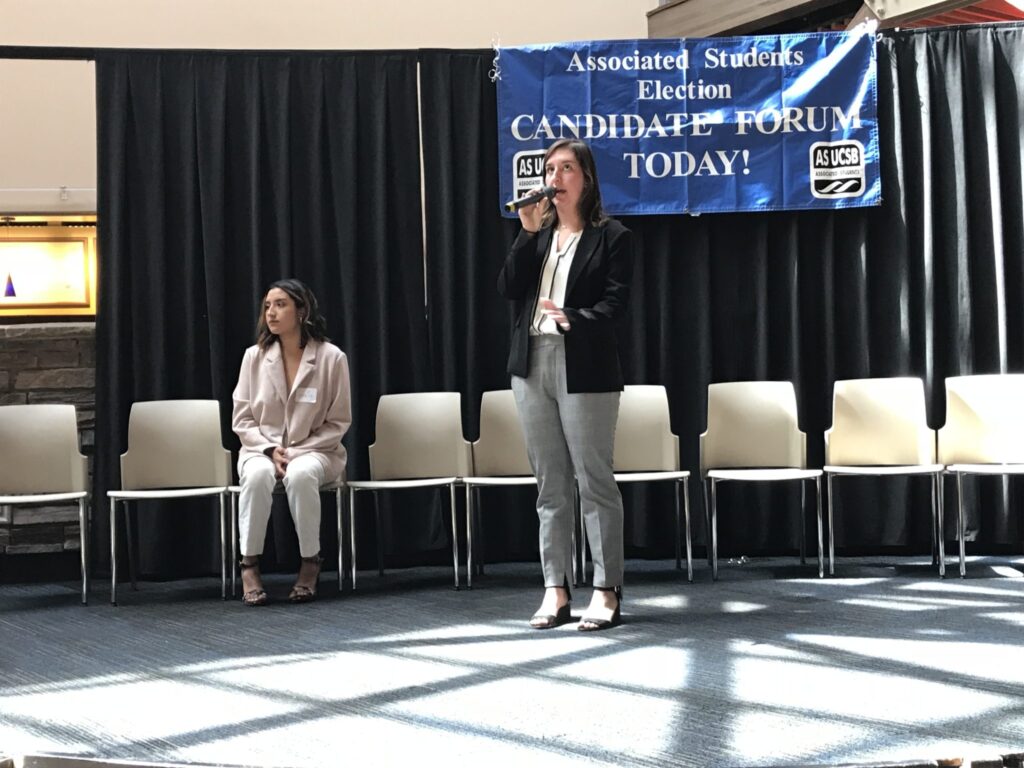 Candidates Martinez and Ettleson spoke to the general student body during the SAG forum on April 16. Evelyn Spence/Daily Nexus

Student Advocate General candidates for Associated Students elections introduced themselves to the student body during a Monday forum in The Hub, discussing how they would represent students should they be elected to the executive office.

OSA is a non-partisan executive branch within Associated Students (A.S.) that works to help students who “face charges from the University in housing, academic, social conduct, and public interest matters,” according to the OSA website.

Both candidates introduced themselves and fielded several questions from both moderators and anonymous submitters about their qualifications for the position.

Martinez and Ettleson are running as independent candidates, since the S.A.G. cannot be affiliated with one of the campus parties. They are the only candidates on this year’s ballot who are running independently.

Both currently work within A.S. Ettleson is currently the chief of staff within the OSA, while Martinez is a letters and science senator within the A.S. Senate.

Here are the issues addressed during Monday’s S.A.G. debate:

Ettleson said she would be as transparent as she can be with case work due to the confidential nature of the information within the office, but will be “as transparent as possible with [her] own work” and what students’ needs are.

Martinez was not present to answer the first question as she arrived late.

Martinez described the S.A.G. as someone who is “willing to speak out for communities who have historically been silenced on campus” and is focused on making A.S. more accessible.

Ettleson said the role of S.A.G. is complex and focuses on helping students with issues such as housing policy and violations of student code of conduct, as well as helping students navigate issues with the administration.

Ettleson explained her role as the OSA’s chief of staff, working “with the operations of the office, advocating for students’ needs in the association and throughout the community [and] working with the current Student Advocate General.”

Martinez said that, as a senator, she has served on the housing committee, created the first international student BCU, the first public and mental health commission and was the only senator to serve on the housing and textbook affordability committee.

According to Martinez, the biggest issue students face is making higher education more accessible due to the problems under the current Trump administration, specifically for students who come from marginalized and disadvantaged communities.

Ettleson said the most pressing problem students have faced this past year is “how many issues are being [dealt with],” including food insecurity, housing problems, increasing tuition and various legal issues.

When asked about partisanship within the UCSB community, Ettleson said this position requires “putting the job first and yourself second” in order to remove personal interests from the matters.

Martinez referenced Ettleson’s point, emphasizing that the job is number one and that regardless of political affiliations, the “ability to make a difference in somebody’s life and the ability to change and make or break somebody’s career” comes above all.

Ettleson said she wants to make sure the office is operating at maximum effectiveness with “increased sufficiency.” She explained that she would like office hours to be held in other spaces on campus to increase accessibility and implement programs that would reduce the number of housing and student code of conduct violations, specifically aiming to make OSA a household name.

Martinez said she would like to expand on the current S.A.G.’s polling project by implementing community organizers who would then specifically work to target first-year students. “[I want to] tailor our resources, our programs and our outreach to make sure that the services the office offers [are beneficial],” she said.

INVOLVEMENT IN A.S. IF NOT ELECTED:

Martinez said she would focus her energy on making sure that the BCUs she created are up and running and would continue to make sure that her work as a senator would “continue regardless of the position that [she holds.]”

Profiles of all 52 A.S. candidates will be up shortly.