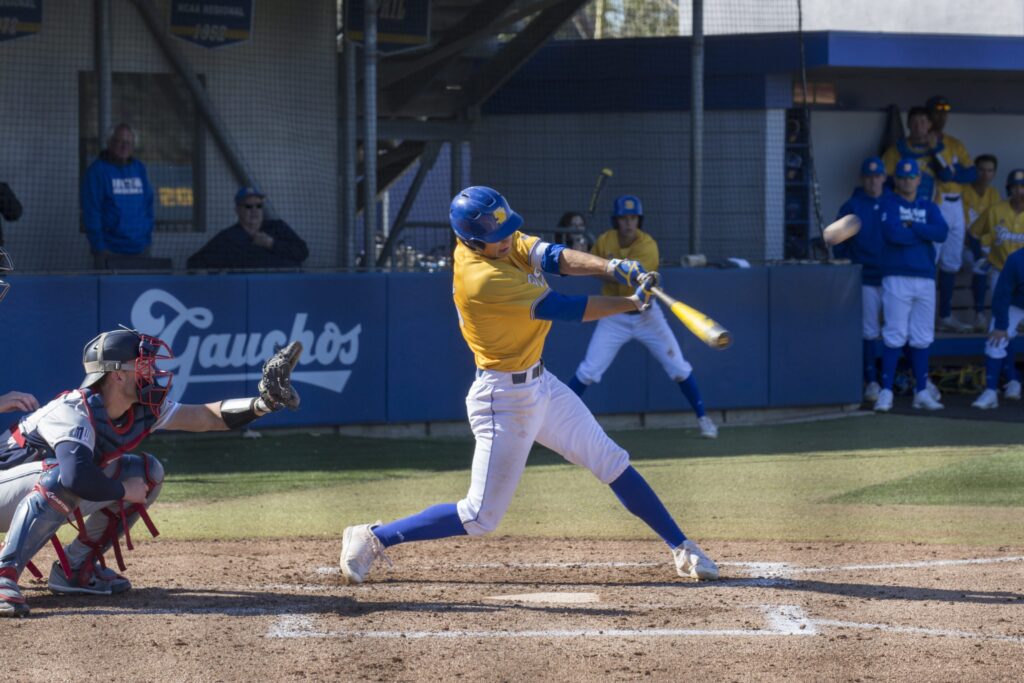 One day after struggling to get any hits against UC Irvine’s Andre Pallante, the UCSB baseball team had one hell of a day at the plate flipping the script on the Anteaters to even the series up heading into tomorrow.

In total, UCSB tallied 16 hits throughout the course of the game bringing in nine runs in order to set up the rubber match for tomorrow. Freshman Drew Williams was the big hero on the day for the ‘Chos going 4-5 on the day driving home two runs and scoring two also.

Early on, Santa Barbara looked as though it would be struggling with the clutch at-bats as it left the bases loaded in the first.

In the second, however, things got going early as Williams with a single and then got to second on a bunt. Redshirt junior Clay Fisher brought him in later with a sac fly. Today was also a special day for Fisher as he started at second base, the first time he has seen field action all season since recovering from surgery on his right, throwing should last year.

Junior Sam Cohen then lined a two-run single in the top of the fourth to extend the Gauchos lead to 3-0. In the bottom of the fourth, UC Irvine retaliated with one run to cut the lead down to two.

Sophomore right-handed pitcher Chris Lincoln was also very solid from the mound all the way through. On the day, Lincoln had another great start allowing just four hits and one earned run in 5.2 innings with three strikeouts.

Lincoln was relieved of duty after allowing two singles in the bottom of the sixth. Junior Kevin Chandler came in out of the bullpen and saved the inning striking out the very next batter to keep the Gauchos lead at 3-1.

During its half of the seventh inning, UCSB sent 12 batters to the plate scoring six runs against three Irvine pitchers to really take control of the match at 9-1.

The rally included a leadoff double by sophomore center fielder Tommy Jew, a run-scoring double by freshman infielder Marcos Castanon, a two-run double by Williams and a pair of bases-loaded walks by UC Irvine’s Alonzo Garcia, the third pitcher of the inning.

Irvine would go on to score one run in the seventh, eighth and ninth, but at the end of the day that would not be enough as UCSB escaped with the 9-4 victory.

Over the final 3.1 innings, Chandler, freshman Chris Troye and junior transfer Alex Patterson allowed one run each, a pretty good outing from the pen following a solid start from Lincoln who picked up his second straight win to improve to 2-1 on the season.

At the plate, Williams had his best day as a Gaucho but guys like freshman third baseman McClain O’Conner and Cohen also had solid days tallying multiple-hits.

Another important key thing to note is that Saturday’s win is the Gauchos first road win of the season, a sign that maybe this team is starting to really turn the corner. Of course, that can’t be known until it possibly earns its fourth straight weekend series victory.

The UCSB/UCI series will conclude with the rubber match beginning at 1 p.m. on Sunday, April 15 at Cicerone Field. The game will also be live streamed on ESPN3.