A year after students and alumni fought against the demolition of The El Centro Annex building, El Centro will be officially reopened on April 14, debuting its renovations and a time capsule burial dedicated to the building’s history. 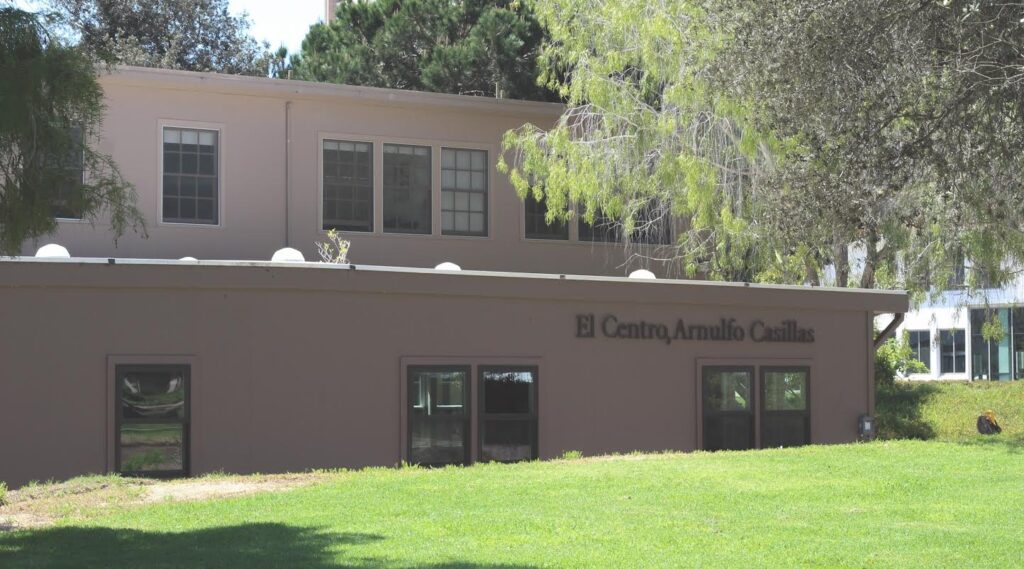 The El Centro Annex has served as a place of organization and community for UCSB’s Latinx community and other campus groups for four decades. The building was deemed unstable in 2017 due to various structural problems, promting students and alumni to call for its repair and the preservation of its history. Kaitlyn Ngyuen / Daily Nexus

El Centro, which sits on sunken ground between the library and Broida Hall, has historically been a gathering place for Latinx students and activists. The building provides working space for campus organizations including M.U.J.E.R. de UCSB, El Congreso, Students for Justice in Palestine and the conglomerate Mesa Directiva.

The reconstruction cost approximately $900,000, funded by Student Affairs and partially funded by the deferred maintenance program.

In January 2017, occupants of the building received a 45-day vacate notice after a report from the Van Sande Structural Consultant group confirmed various structural issues including insect infestation, poor ventilation and structural damage that made the building highly unstable in the event of an earthquake.

After the eviction notice, students and alumni voiced their frustration toward the administration for seemingly ignoring the requests of the occupants to repair the building, according to Shahryar Mooraj, a fourth-year mathematical science and physics double major and member of the El Centro Committee.

The Associated Students Senate passed a resolution a few weeks later that supported the restoration of the building and by April 2017 the administration had decided against the demolition of the historic building.

A committee of students and administrators was then created to discuss the conditions of the new building and to discuss what was needed.

“As students, we came together to stop that and to fight for the history and the culture that has been built in that space over time and to ensure that El Centro has a permanent physical space on campus,” Mooraj said.

The space was created as a response to the lack of representation and support from the UCSB administration for the Latinx community, which additionally led to the creation of the Chicana/o Studies department and support programs like EOP, according to Mooraj.

A 10-day hunger strike by Chicanx student activists in 1994 pushed the UCSB administration to make El Centro a permanent space after the trailer had been given a life-span of 10 years and had not been considered a permanent building.

“The space of El Centro was allocated in the late ’70s, early ’80s to give students of color a place to congregate, a place to meet where they could feel welcomed on campus during a time when that really wasn’t the case,” Mooraj said.

“Since then, it’s been a center for community organizing and activism in terms of fighting for different things that students need,” he added.

According to Mooraj, students at El Centro continually fought for the permanency and improvement of the building, including insect and mold inspections and requests for a hydration station, which was eventually installed late 2016.

According to UCSB spokesperson Andrea Estrada, the entire portion of the building that was previously a trailer was remodeled, except for the wood stud walls and plywood siding and the wood roof rafters and plywood roofing.

The trailer now has a concrete foundation, a drainage system to prevent flooding during the rainy season and new wiring that improves the lights and Wi-Fi connection in the building.

Mooraj said that some offices were remodeled to create a conference room and a kitchen. Ten feet of space was also added to the main activity room.

According to Mooraj, the new building is expected to be a permanent location for El Centro, and there will be regular upkeep and maintenance.

UC Santa Barbara’s Educational Opportunity Program (EOP) and Early Academic Outreach Program are currently operating from the building. A psychologist from Counseling and Psychological Services will also be accessible on the first floor of the building.

“We have a signed agreement with the Chancellor and Vice Chancellor for Student Affairs and other administration that El Centro will be a permanent physical space and that it will remain where it is today,” Mooraj said.

A version of this article appeared on pg. 5 of the April 12, 2018 issue ofthe Daily Nexus.