Corals are in rapid decline on many reefs due to global stressors associated with climate change, such as increasing sea surface temperatures that cause coral bleaching and disease, as well as local stressors like nutrient pollution, sedimentation and overfishing.

An important component to restoration of degraded terrestrial, aquatic and marine ecosystems is the reestablishment of key ecological processes

UC Santa Barbara scientists and their colleagues advocate for harnessing ecological processes that drive community dynamics on coral reefs in a way that facilitates the establishment and growth of restored corals. Using existing scientific literature coupled with original research, they outline a scientific framework aimed at advancing the emerging field of coral restoration.

“We don’t have a lot of science to guide how we actually conduct coral restoration,” co-author Deron Burkepile, an associate professor in UCSB’s Department of Ecology, Evolution, and Marine Biology (EEMB) said. “The next phase of coral restoration must focus on harnessing ecological processes that drive community dynamics on coral reefs to help facilitate the establishment and growth of restored corals.”

These efforts have become increasingly successful at establishing target corals that are often threatened or endangered. In the Caribbean alone, there are at present more than 150 coral propagation operations in over 20 countries, containing tens of thousands of nursery‐raised corals for use in restoration efforts. The nascent field of coral restoration is therefore on the threshold of conducting substantial restoration programs.

In regards to herbivory, robust herbivore populations can suppress macroalgal cover, minimize coral-algal competition, increase coral growth and recruitment and facilitate the recovery of coral populations after disturbances. Due to this, the researchers believe that capitalizing on herbivory in concert with coral restoration, either by outplanting coral in areas where herbivory is high or promoting herbivory on reefs where it is diminished, should therefore be both a research and a restoration priority.

While herbivory may help in terms of coral-algal competition, coral predation, or corallivory, is a chronic source of tissue loss and mortality for many species of coral.

Common predators of coral include many types of invertebrates such as snails, fireworms and sea stars, and fishes like damselfishes, butterflyfishes and other corallivorous species. Before the mass bleaching of 2014, over 40 percent of the coral cover lost on Australia’s Great Barrier Reef over the past three decades was due to outbreaks of the corallivorous crown‐of‐thorns sea star.

However, through the researchers’ survey, they found that avoiding or managing corallivory was seen as one of the least important factors among restoration practitioners when selecting sites to outplant corals. Despite this, corallivory has attracted more research attention in the coral restoration literature. 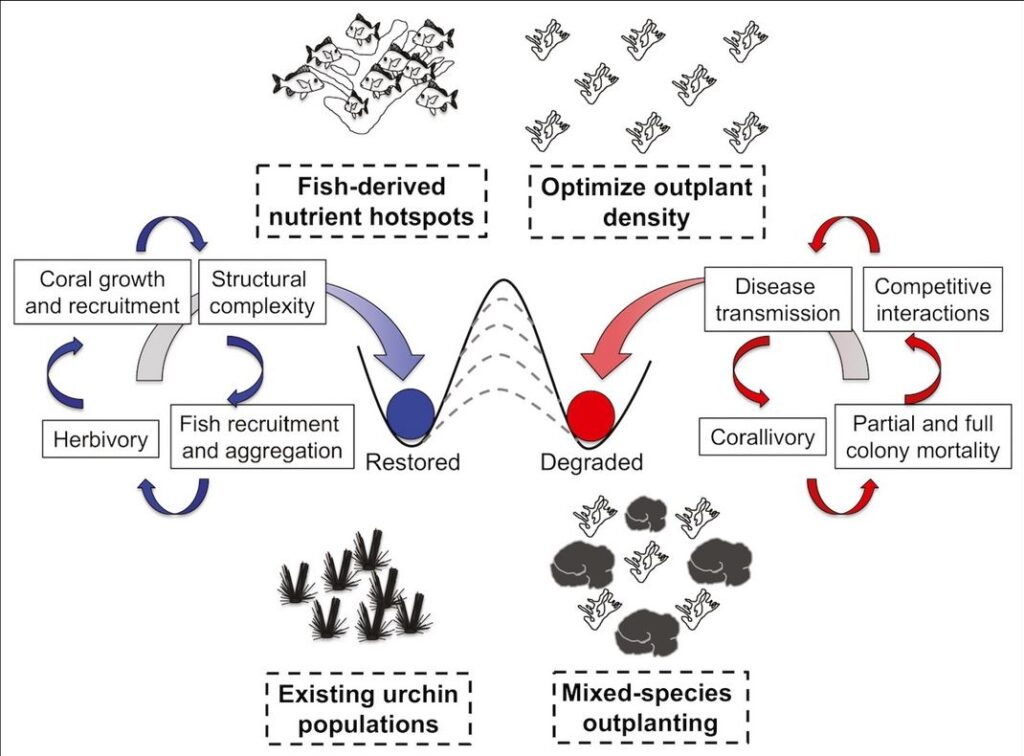 Recovery of corals on a degraded reef can be facilitated by positive feedbacks. If restoration can promote these feedback mechanisms, the likelihood for coral recovery increases. Simultaneously, negative feedbacks also can inhibit recovery. However, restoration can be designed to impinge on these negative mechanisms to disrupt these feedbacks and initiate recovery required to push a reef from a degraded state toward recovery. / Courtesy of Ecological Society of America

Processes that affect coral survival — and ultimately restoration efforts — may be context‐dependent. For example, many damselfishes are territorial algal gardeners that could promote or hinder restoration efforts, depending on geographic location and species‐specific behavior. In the Caribbean, territorial damselfishes destroy large amounts of live coral tissue to create algal gardens that are fiercely protected from larger herbivores.

Coral restoration efforts should therefore avoid areas with large damselfish populations. Concentrating coral outplants in areas with high biomass of piscivorous fishes may reduce the abundance of damselfishes and their negative impact on corals.

Conversely, on Indo‐Pacific reefs, territories of the dusky farmerfish, a common species of damselfish, can promote the survival and growth of rare corals that are otherwise rapidly consumed by corallivorous fishes.

Competition for limiting resources can drive population dynamics, community succession and ecosystem function, particularly on coral reefs, where space is a highly contested resource. On many reefs worldwide, weedy, fast‐growing species of sponges and soft corals are replacing reef‐building corals and slowing the growth and survivorship of remaining corals.

Frequent and abundant competitive interactions can generate a series of negative feedbacks that may inhibit the regeneration of diverse, topographically complex coral reefs and impede restoration efforts.

Corals vary widely in basic traits that influence population and community structures, such as growth rates, reproductive outputs and symbiont identities, which differ among species, populations and individuals within a population. For example, there is substantial variability among genotypes for such traits as growth and branching rates. For coral restoration, more information about important traits of corals used for restoration would allow restoration practitioners to select species and genotypes best suited for specific restoration sites.

“The future of coral restoration lies at the intersection of capitalizing on people’s abilities to grow coral and combining that with accumulated ecological knowledge about how reefs actually work,” Burkepile said. “Up until now, those two camps have been operating in separate spaces, so we need to put their Venn diagrams together to make their interests overlap because there’s a lot of productive space in the middle.”