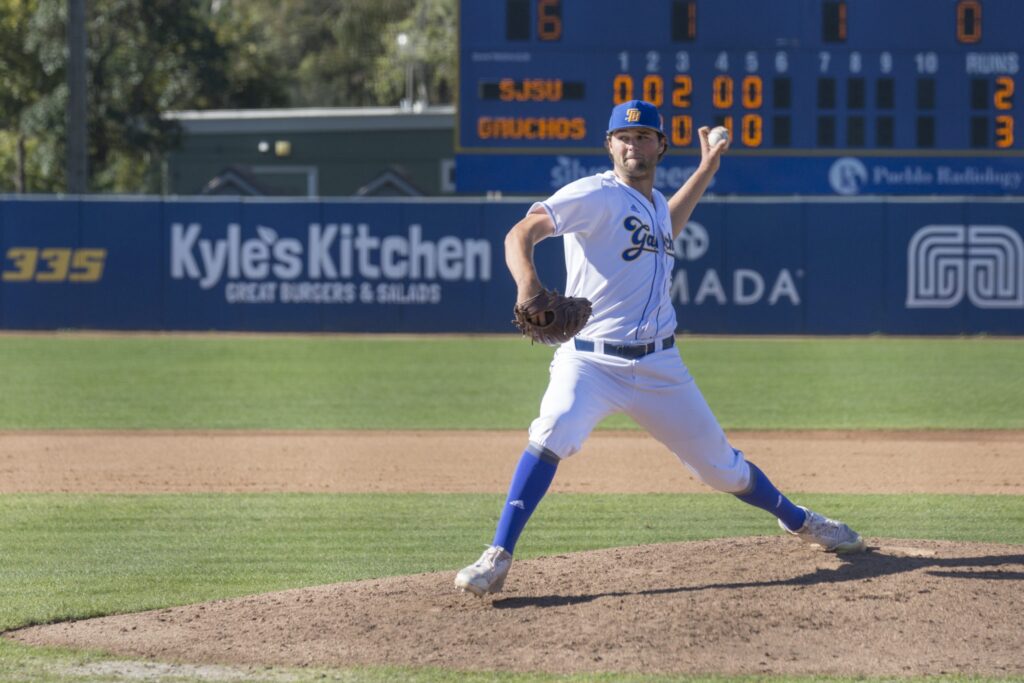 Coming in off a loss to USC in its midweek matchup just a few days ago, the UCSB baseball team will look to regroup with its final non-conference three-game weekend series of the 2018 campaign against UTRGV.

“[The loss against USC shows] there are some things we still have to work on and focus on in order to get to where we want to be,” Head Coach Andrew Checketts said.

Santa Barbara hosts the University of Texas Rio Grande Valley with just an 11-13-1 overall mark but a 2-1 conference record. UTRGV comes into this weekend series boasting a strong 16-13 overall record along with a 3-3 conference mark but has lost its last three games all by at least five runs and a combined 25 runs.

This weekend will mark the first time these two programs meet in school history, and, as such, it is an important one for UCSB.

Having lost to USC 9-3 on Tuesday, the Gauchos failed to capitalize on the chance of getting to .500 for the first time this season and to continue the momentum it had gained from taking two of three against perennial Big West powerhouse Cal State Fullerton.

Despite this being the first time UCSB will take on UTRGV, it is no strangers to opponents from the WAC conference — the conference UTRGV belongs to.

In the Checketts’ era, Santa Barbara has posted a 13-11 mark against Western Athletic Conference opponents with all of those games being against either Sac State, who it dropped two of three to earlier this year, or Cal State Bakersfield who it has yet to play this season. Against Texas schools in general during the Checketts’ era, UCSB has gone 8-15.

“Honestly all the Texas teams we have played so far have been really talented so we are going to treat these guys like any other team and come out ready to play,” Lincoln said. “We are definitely confident. We know we have the talent to compete with anybody if we do all the things we know we can do.”

This series is also important because it marks the end of the six-series, 21 of 22 game homestand the Gauchos were enjoying in the middle to latter part of its season. A series win against a quality opponent would be huge.

UCSB has won its last two weekend series and a big part of that has been the pitching as it has only allowed an average of 2.5 runs per game in its last six weekend matches.

“Obviously it starts with pitching and we have had some solid performances on the mound from guys like Ledesma who was great last week,” Checketts said.

Being the Sunday starter, Stevie Ledesma has been nothing short of spectacular in his first three starts this season. In those games, the senior has tallied a 0.96 ERA and delivered a beauty in his win against CSUF last Sunday going 7.2 innings allowing just four hits, one earned run while striking out five.

Right-hander Chris Lincoln has also been nothing short of solid these last few weeks recording a 2.70 ERA as a starter. He currently sports a 2.15 ERA on the year overall and has also recorded a career-high 27 strikeouts.

“This is still a learning experience for me and I know I still have a lot to learn but I just want to put my team in the best position to win and I think I have done a decent job so far,” Lincoln said. “It’s been a lot of mental focusing this year and trying to attack hitters more this season and it’s paid off.”

In his career, the sophomore has made six career starts but has yet to pick up a win. His lone victory of his career came in relief work. In three starts so far this season, Lincoln has earned a no decision in each outing but the ‘Chos have won each match.

“So far this year all of my starts have been team wins and I am happy with that and I know if I keep working the win will come, but yeah absolutely I’d like to get my first [win],” Lincoln said.

With former bullpen pitchers now becoming starts, UCSB has needed other guys to fill those roles and sophomore Shea Barry and freshman Chris Troye has done just that.

“Shea Barry has been great out of the pen and Chris Troye looks like he is getting healthier and consistent so that’s a boost,” Checketts said.

This season, Barry has a 2-0 record and one save with a 3.09 ERA and 12 K’s while Troye, who struggled earlier this year, has allowed zero runs in his last two outings in relief.

One thing the Gauchos do have to worry about is replacing stud freshman Andrew Martinez to an injury. This year he has become a defensive star and had a .319 batting average with four homers.

“Losing Martinez is tough but [Marcus] Castanon has done a great job filling in at shortstop but now we need to fill our second base spot so really that is key for us going forward,” Checketts said.

Overall this weekend could be a real turning point for the Gauchos but it needs to take advantage something it hasn’t done the past few weeks.

“We would like to finally be above .500 by the end of this weekend, it will be tough but it would be nice to have that momentum going forward,” Checketts said.

UCSB takes on UTRGV for game one at 3 p.m. on Friday, April 6 at Caesar Uyesaka Stadium.