The Isla Vista Community Services District has faced difficulties implementing the motions passed at their Deltopia Town Hall last month, as the university and county have denied its requests leading up to the weekend party. 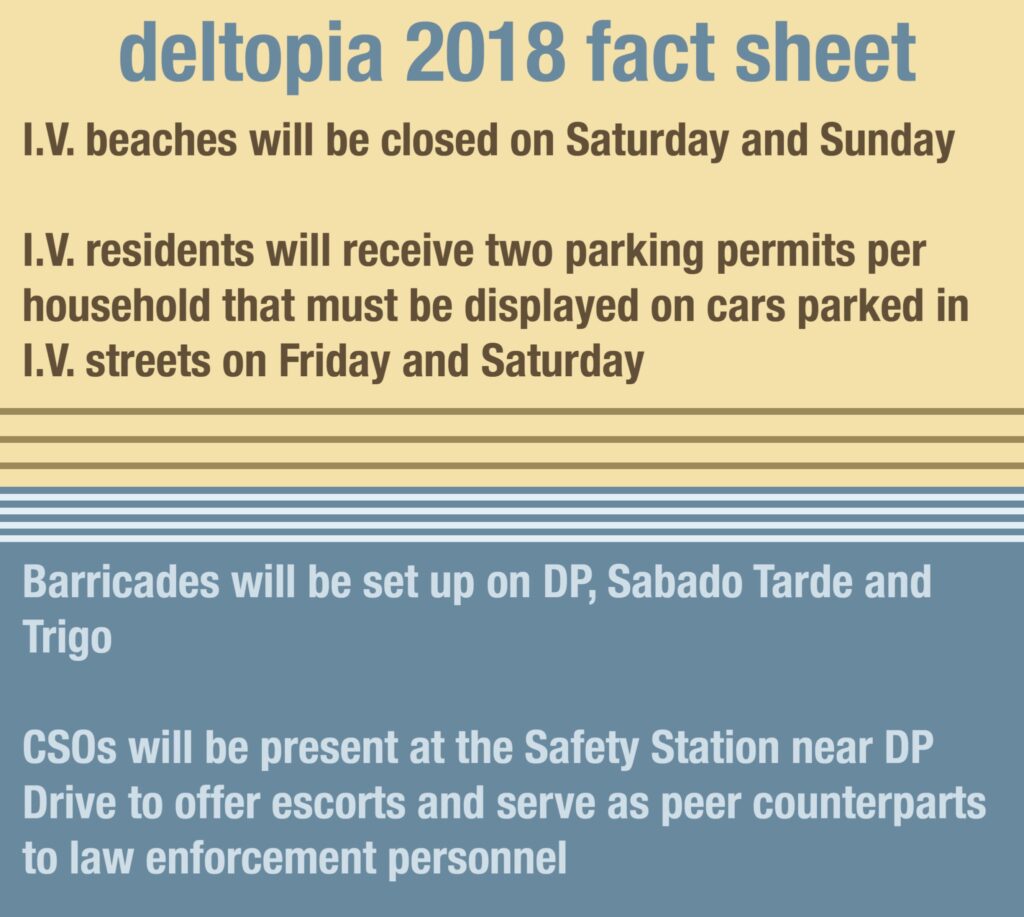 While the CSD was able to schedule CSOs to work at the Safety Station during the day on April 7 — as opposed to their regular night shifts on the weekend — the board was unable to prevent the university from installing fences on El Colegio Road. Melanie Voskanian/Daily Nexus

The Community Services District (CSD) held the Town Hall to discuss the structure of the event and address resident concerns regarding parking, law enforcement presence and other factors related to increasing the overall level of safety of the weekend.

While the CSD was able to schedule CSOs to work at the Safety Station during the day on April 7 — as opposed to their regular night shifts on the weekend — the board was unable to prevent the university from installing fences on El Colegio Road. Their request to the county to use the Solar Lot on Embarcadero Del Mar as alternative parking was also rejected.

CSD Secretary Spencer Brandt said after identifying that the university was financially responsible for the fencing on El Colegio Road as opposed to the Santa Barbara County, the board put in a request with the university to avoid putting up fencing in response to the demands of the community.

“We put in the request and essentially never heard back,” Brandt said. “A couple of us, myself included, feel very disillusioned by the fact that the university is not willing to listen to a bunch of concerned community members.”

University spokesperson Andrea Estrada said fencing had been installed on El Colegio Road despite the motion that the CSD passed.

“In the interest of public safety and traffic concerns, and in consultation with county officials and law enforcement, the decision was made to once again use the fencing during the weekend,” Estrada said when asked why the CSD’s request was denied.

University Board appointee George Thurlow referenced two incidents in Santa Barbara in which pedestrians were killed in car accidents while jaywalking to explain why the university and UC Santa Barbara Police Department (UCPD) chief of police were adamant about installing the fences.

“At the end of the discussion, it was concluded that that fence needed to be there, and if it saves one life, then it was worth it,” Thurlow said.

The board had previously contacted the university to ask about the cost of fencing and were only told that it was a “substantial amount of money,” according to Brandt.

Brandt said he believes the university is keeping the figure under wraps because the high price tag would upset residents who already oppose the fencing.

“I think that it’s disheartening because we do a lot of work to try to change the character of these events and make them so they are more community-based so that they are something that is safe for all community members,” Brandt said.

Brandt said there are better alternatives the university could promote, such as UCIV, a student-run volunteer program that has been developed in the past three years.

Brandt said he believes UCIV would be able to “ensure that the event is safe on a peer-to-peer level in a way that law enforcement has failed to be able to do.”

“We’ve seen a volunteer program just spring up out of nowhere, totally student-led, that really wants to try to dull down the number of people that are interacting with law enforcement, that are being arrested and being cited,” Brandt said.

Brandt also spoke about the importance of peer-to-peer relationships between students and CSOs, saying he felt the motion to have CSOs present at the Safety Station during Deltopia is a positive step.

He said he believes it’s important for the CSOs to be the “eyes and ears” of the community during events like this, when residents might not feel comfortable approaching law enforcement personnel with critical information.

Plans regarding the creation of alternative parking for residents living on Del Playa Drive, Sabado Tarde Road and Trigo Road were halted after the Santa Barbara County Community Services Department rejected the board’s request to use the Pardall Solar Parking Lot, Brandt said.

He also said the County was “concerned about the loss of revenue” if the parking lot was used by residents of impacted streets for free.

Thurlow said the board was working with Transportation & Parking Services in order to create alternative parking, particularly with concerns for students who use their cars to get to their jobs.

Originally, it was assumed that only Del Playa Drive and Sabado Tarde Road would have restricted parking. Brandt then found out on April 4 that parking on Trigo Road would also be controlled and that parking would not be permitted within 100 feet of the barricades.

“There’s certain areas where we put no parking, like Trigo Road. The vehicles there will get towed because that street is going to get shut down,” Isla Vista Foot Patrol (IVFP) Lieutenant Juan Camarena said. “Everywhere else our recommendation is not to park, but if you park we’re not going to tow it like last year.”

According to a press release from the city of Goleta, all vehicles in the area from Hollister Ave. to the southern city limit and from Cannon Green Drive to Storke Road without an approved permit will be subjected to a ticket. Parking lots on campus will also be restricted. Daytime parking will only be available for vehicles with the appropriate permits visible; vehicles parked on campus overnight without proper authorization will be impounded and given a $300 fine.

Both Lieutenants Camarena and David Millard of UCPD attended the Deltopia town hall last month. At the town hall, Lieutenant Camarena said the UCPD and IVFP planned to closely monitor social media and adjust the amount of law enforcement present during Deltopia accordingly.

Millard and Camarena said that they were not aware of any such monitoring when asked about efforts regarding plans to observe social media platforms for any posts related to Deltopia.

“I can’t say that I actually even heard that they were doing it this year,” Millard said.

UCPD and IVFP currently have no plans to adjust the projected level of police presence during Deltopia, regardless of the weather, according to IVFP Deputy James McKarrel.

“Rain or shine we will be staffed because it’s easier for us to reduce our units if we don’t need them then to bring them in if we do need them,” McKarrel said.

Camarena estimated that there may be “around 60 to 70 officers” out during Deltopia, but could not give an exact number.

“It’s going to be similar to last year,” Camarena said.

Millard also could not give an exact number of officers and said the department won’t know how many they will deploy until the day of the event because “officers may get sick or have family emergencies.”

Camarena also said IVFP would not bring in horses during Deltopia.

“This is my first year as a lieutenant for Deltopia, and the whole thing for me is just another day for us,” he said. “We just need to make sure that people are safe.”

A version of this article appeared on p.3 of the April 5 print edition of the Daily Nexus.

Shocker: they don’t care about what the community wants or needs.

Much of the fencing clearly has no role in preventing pedestrian accidents… it is randomly placed, like, in front of the Family Student housing. No rhyme or reason. If someone submitted a legal request under the California Public Records act, UCSB would have to give the receipts/cost for the fencing. There is of course a chance that it is a relative of a UCSB employee who is making money off of the fencing contract; or, even a chance that the fencing company gives $ to someone in UCSB for this work. Facilities at UCSB has in the past made arrangements… Read more »