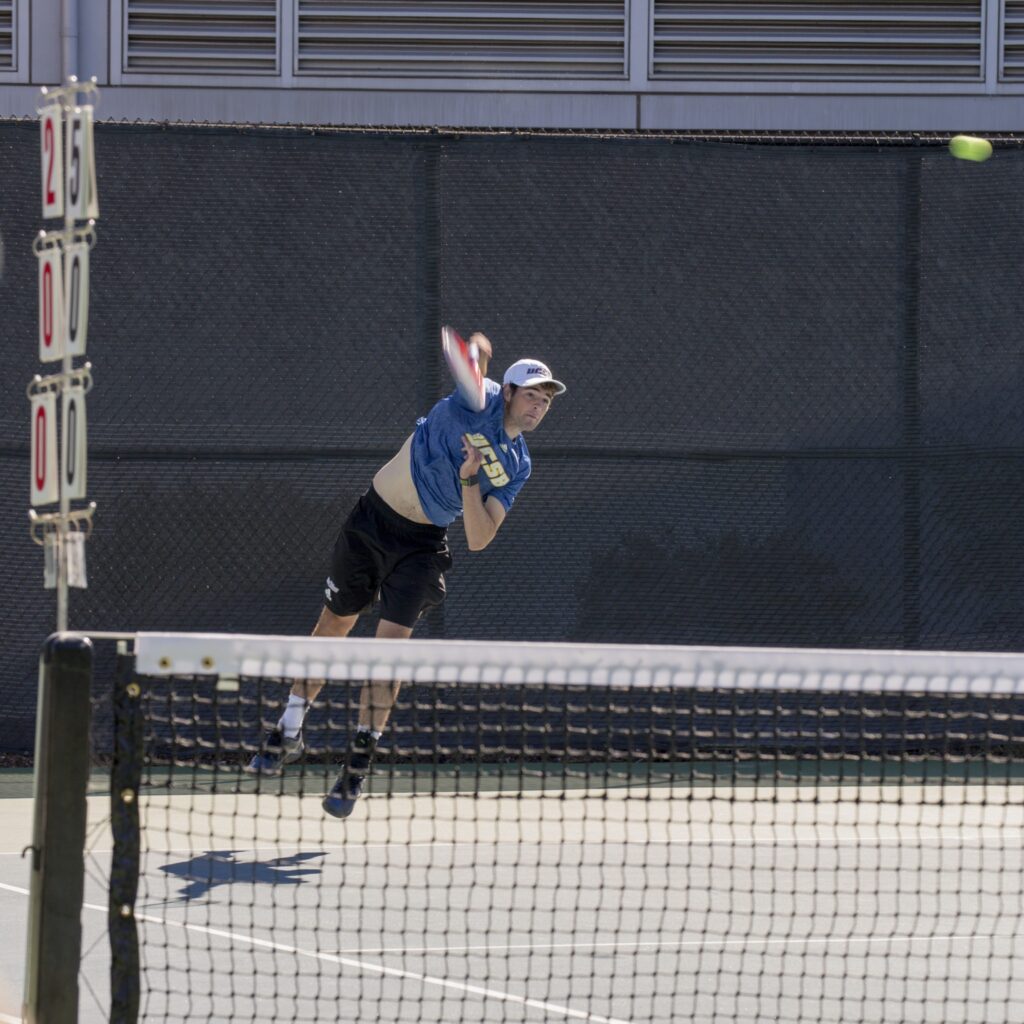 The UCSB men’s tennis team stayed unbeaten at home on the season after their 6-1 drubbing of Boise State on Sunday.

After their away match against Loyola Marymount got cancelled on Saturday due to inclimate weather, the Gauchos were able to direct their full attention to the Broncos– a team that has struggled so far this season, entering the game with a 3-8 record.

Santa Barbara came out firing in doubles, with the pairing of Sophomore Joseph Guillin and Freshman Viktor Krustev winning 6-0 on court three.

On court one, Juniors Anders Holm and Nicolas Moreno De Alboran jumped out to an early 3-0 lead, in large part behind the strong net play from the two. However, their opponents slowly fought back, eventually bringing the score to 5-4. But behind some strong serving from Moreno De Alboran, the Gauchos were able to clinch the set as well as the doubles point to take a 1-0 advantage.

“We definitely took charge of the match right away,” Senior captain Simon Freund said. “We were able to cruise through the doubles matches and take that into the singles matches.”

From the outset of the singles matches, it was clear that UCSB was determined to dominate their opponent as much as possible. On three of the six singles courts, the Gauchos took the first set by a score of 6-0.

As has been the case all season for the Broncos, they struggled to pick up victories on the higher courts.

On court one, after winning his first set 6-0, Moreno De Alboran continued to harrass his opponent, using his signature forehand shot to send him scattering ball after ball. His opponent ultimately retired due to injury in the second set, giving Santa Barbara a 2-0 victory.

On court three, in only his second match back from injury, Freund looked to be back to his old self. He dominated his opponent, winning the first set 6-0 and the second set 6-1 in order to give the Gauchos a 3-0 lead and put them on the verge of victory.

“I’ve been getting better and better at working around the injury,” Freund said. “I’ve even had a higher serving percentage since getting back from my injury.”

UCSB clinched the victory when Guillin won his match on court two in straight sets, 6-2, 6-1. Per usual, Guillin seemed to be one step ahead of his opponent throughout the match, and frustrated his opponent by picking on his weaknesses. The win moves Guillin to 11-1 on the season, and gives him a ten game winning streak in singles despite having played his last two matches at the number two spot.

Even after the match was already clinched for UCSB, Holm and Krustev picked up dominant victories on courts four and five, respectively, in order to boost their confidence heading into a tough match on Tuesday against LMU.

“Even though we might not have played the best team, it’s always nice to win with authority,” Freund said. “It builds a lot of confidence when you roll like we did.”

With the victory, Santa Barbara now moves to 7-5 on the season, while Boise State drop to 3-9. In addition, UCSB remains unbeaten at home on the season with an overall home record of 6-0.

“One of our goals is to stay unbeaten at home, so I guess we’re all extra hungry to keep that streak alive,” Freund said.

The Gauchos now turn their attention to No.36 LMU, who they will face on Tuesday following their rained out match over the weekend. Once again, UCSB will be looking for their first road victory of the season in that match, as well as a victory against a top-tier team.