The Daily Nexus
Tennis
UCSB Returns Home, Will Host Penn and LMU This Weekend
March 8, 2018 at 5:03 am by Andrew Bishop 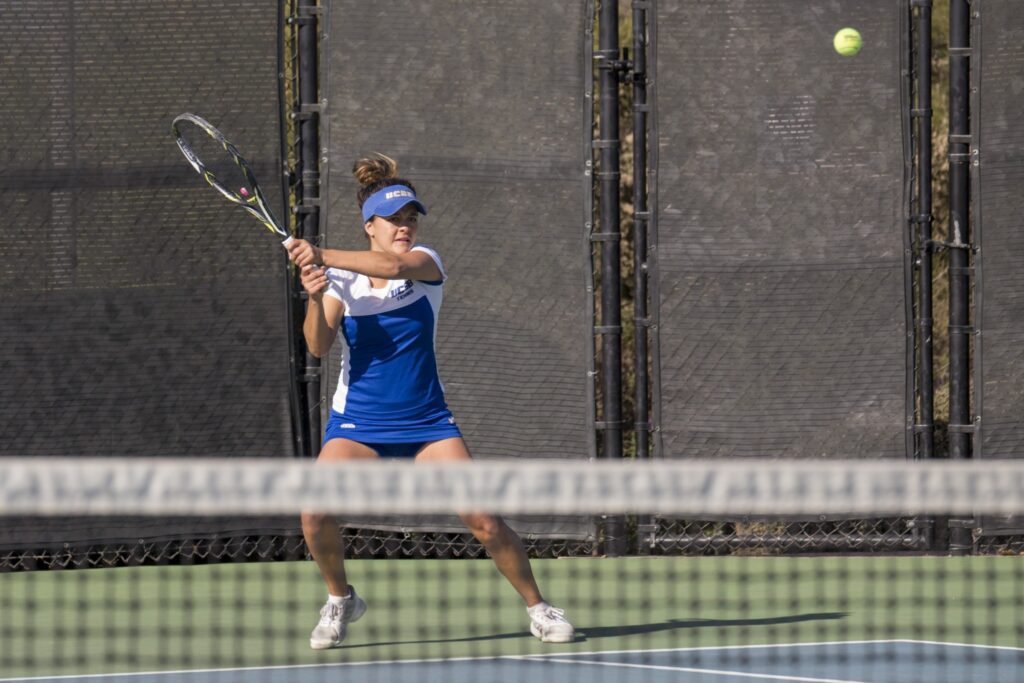 After splitting its weekend matches on the road in Arizona, the UCSB women’s tennis team will return to its home court to host both the University of Pennsylvania on Saturday and Loyola Marymount on Sunday.

The Gauchos, who are currently 6-8, are returning from a brief road tour that resulted in a 4-0 victory against Arizona and a 4-0 loss to then No. 33 Arizona State the day after. UCSB experienced a slight regression in doubles play against the two teams, narrowly defeating Arizona 2-1 in doubles and falling to ASU 2-0.

Penn comes into Santa Barbara with a 5-7 record and is currently on a three-match losing streak. It is now 0-1 against Big West opponents following its 4-3 loss to Long Beach State on Tuesday. The Quakers are winless on the road with an 0-3 record. LMU has been very impressive as of late as it has won six matches straight to sit at 7-2. The Lions are 3-0 against Big West teams this season with wins over Cal Poly, Cal State Fullerton and Long Beach State.

Despite lacking consistency in doubles play overall, the Gauchos have experienced exemplary play by their duo of seniors Natalie Da Silveira and Palina Duvabets, who recently moved up to No. 39 in ITA doubles rankings, jumping nearly 20 spots from No. 57. The pair has established an impressive four-game win streak in doubles play, which has made up for their team’s struggles on the other two doubles courts.

During preparation for its upcoming opponents, UCSB will look to straighten out some of the issues it has experienced in doubles play in recent matches.

“We obviously are very strong at one, and we need to improve the consistency at numbers two and three,” Head Coach Simon Thibodeau said. “We have to help a few players improve their doubles skills and strategy, and we’re going to work on that this week.”

Due to a lack of success when playing from behind, UCSB will also look to improve upon certain issues that its individual players have faced in singles play, going into what will likely be a challenging weekend against Penn and LMU.

“Penn has beat Harvard this year, and LMU beat SMU, who we just lost to, so they’re going to be good matches,” Thibodeau explained. “This week we’re going to do a lot of private lessons and focus on the things that each of them need, and then collectively, we know we need to step up when it’s time to compete.”

The Gauchos will kick off their weekend at home against Penn on Saturday. UCSB will be the fourth stop for the Quakers on a grueling week-long road tour as Penn is coming off its loss to LBSU. The rigorous nature of its road tour, which includes a match against No. 2 ranked Pepperdine on Thursday, will likely put Penn at a disadvantage in its match against UCSB.

“We’re going to see them on the fourth match of their trip, so we might have a bit of an advantage, but we have to be ready. We have six players now, so everyone needs to show up, and there’s no one who can rest,” Thibodeau said.

The next day, the Gauchos will round out their difficult weekend against a familiar opponent, Loyola Marymount. Helping Loyola ascend is in part due to outstanding play by No. 30 ranked freshman Veronica Miroshnichenko, who has gone 7-1 in dual singles matches.

Miroshnichenko will also give UCSB a run for its money in doubles play, where she and fellow freshman Eva Marie Voracek stand at No. 22 in ITA doubles rankings.

Despite the looming challenge of a very talented player, the Gauchos are confident in their ability to come out on top, provided they show up to play.

“We know them really well, they are really strong at the top of their lineup. We’ve beat them in the past, but now they have an improved team. I think it’s very even,” Thibodeau said. “We can win at each position but we can also lose, so it’s about who competes the best on that day.”

If UCSB comes ready to play against Penn and LMU, it could put an end to its chase of reaching the .500 mark. The Gauchos play Penn, this Saturday, March 10 at 11 a.m. and will continue their weekend with a matchup against LMU on Sunday, March 11 at 12 p.m.