The Daily Nexus
Sports
UCSB Eliminated From Big West Tournament Following Loss to CSUN in Second Round
March 8, 2018 at 12:30 pm by Kendra Jackson 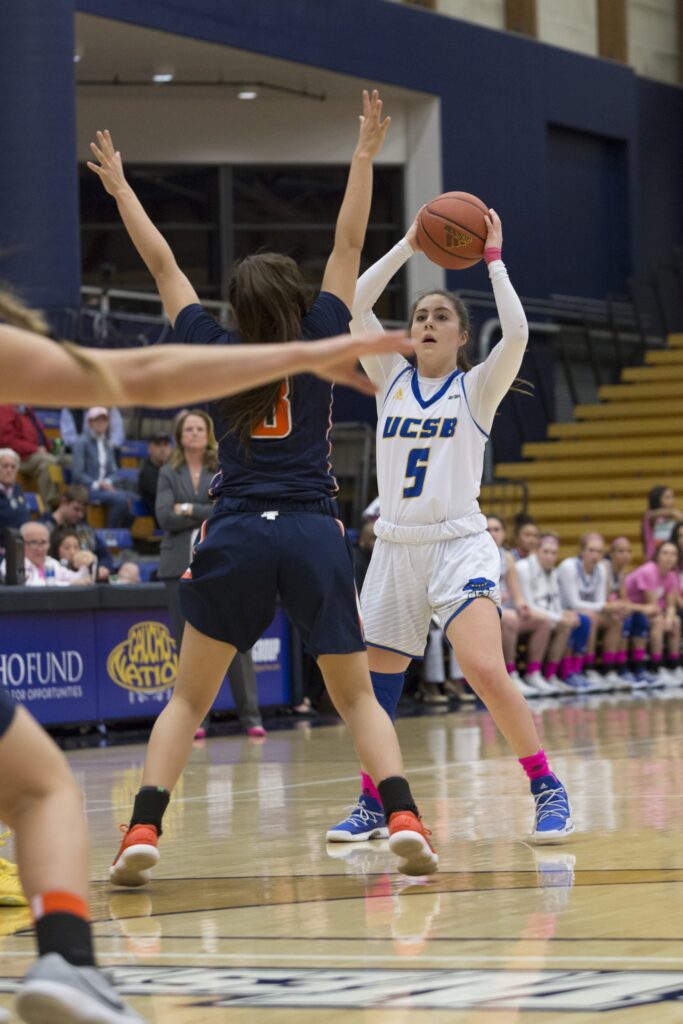 Last season, despite a sub-par regular season, the UCSB women’s basketball team was able to rally and make it to the Big West Championship game with a chance at an NCAA berth on the line.

Unfortunately, no such magic was in the works for the Gauchos this season as a 72-63 loss,which included a killer 11-0 run in the final minutes of the fourth, to CSUN late last night sent them home for the season.

With the win, Cal-State Northridge advances to the Semifinals of the Big West Tournament, which will continue at the Honda Center, while Santa Barbara concludes its season with a 12-17 overall record.

The game was played in Fullerton, California at the Titan Gym, and was not lacking excitement. After a slow start for Cal State Northridge, the teams slowly began trading buckets, in what was shaping up to be a thrilling game.

Santa Barbara had a strict game plan, which they implemented early on. Knowing that Defensive Player of the Year, junior center Channon Fluker, is dangerous in the paint, the Gauchos were determined to contain her.

UCSB came out with forceful defense to start the game, causing the Matadors to fall behind early after missing their first six shots.

On fire in the first quarter and clicking on all cylinders, Santa Barbara’s offense exploded. Senior forward Drew Edelman had two early baskets in the post, making her presence in the game known early.

Edelman punching in her two shots, combined with senior guard Makala Roper splashing in two three-pointers in the beginning minutes, made it look as if the team was poised to run away with the victory.

The Big West Tournament is not for the faint of heart, though, as the Matadors were down but not out.

Despite being behind early, the stellar three-point shooting from CSUN brought them back in the game. UCSB’s opponents shot 9-for-22 from beyond the arc (44.1 percent), causing a world of trouble for the unsuspecting Gauchos – especially since UCSB only shot at 31.6 percent from three themselves.

The ‘Chos held a solid 20-13 advantage mid second quarter, but a great 17-8 rally by the Matadors before the end of the first half gave them a 30-28 lead into the break.

Making second half adjustments, CSUN knew they had to allow Fluker the opportunity to make an impact if they wanted to end up victorious in the game.

Feeding her as soon as halftime was over, and the third quarter began, Fluker scored four-straight points for the Matadors, and UCSB knew they had to put in work to offset her influence.

The Gauchos quickly answered her challenge, when redshirt senior point guard Drea Toler responded with four points of her own – and the back and forth action was alive and well.

This constant trading of baskets continued up until nearly midway through the fourth quarter of regulation.

All knotted up at 53-53 halfway through quarter four, CSUN edged ahead and managed to get up by four, after a pair of free throws from senior forward Tessa Boagni and a stop causing another scoring opportunity.

This was a pivotal point in the game, as Santa Barbara seemingly did not have an answer and simply could not stop the bleeding.

After the four points scored by Boagni, Fluker and Boagni made back-to-back baskets, as Cal State Northridge proceeded to go on a run that lasted over three minutes in the last quarter.

This 11-0 run was unanswered, and the Gauchos were backed in a corner late, as the score sat at 64-53 with 2:44 remaining on the game clock.

The Gauchos clawed their way back and cut the deficit to 6, on baskets from redshirt junior Sarah Porter, freshman guard Sarah Bates, and another shot by Toler; but it was not enough as CSUN hit a pair of clutch free throws to solidify the outcome of the game, regulation ending with the score at 72-63.

In her last game as a Gaucho, Edelman enforced her way to yet another double-double, with an amazing 18-point, 12-rebound show. Porter also had a great game, scoring 15, and Toler ended with double digits as well, notching 13 points of her own.

Boagni led CSUN with a dominating 16 points, scoring 10 of them in the fourth quarter. Freshman guard Destiny Brooks had an impressive 15 points which all came from beyond the arc, and Fluker had a double-double for her squad, as she notched 10-points and grabbed 13 boards.

This was the final game for four seniors on the Santa Barbara roster: Edelman, Toler, Roper and small forward Chaya Durr.

With the loss, one has to wonder where the ‘Chos will go from here. They still have great young talent such as freshman Sarah Bates, but losing Toler, Edelman, Roper and Durr will be tough. Luckily they have all summer to figure it out.