The Daily Nexus
Sports
Guess Who’s Back? Gauchos Return to Big West Postseason
March 8, 2018 at 5:10 am by Spencer Ault 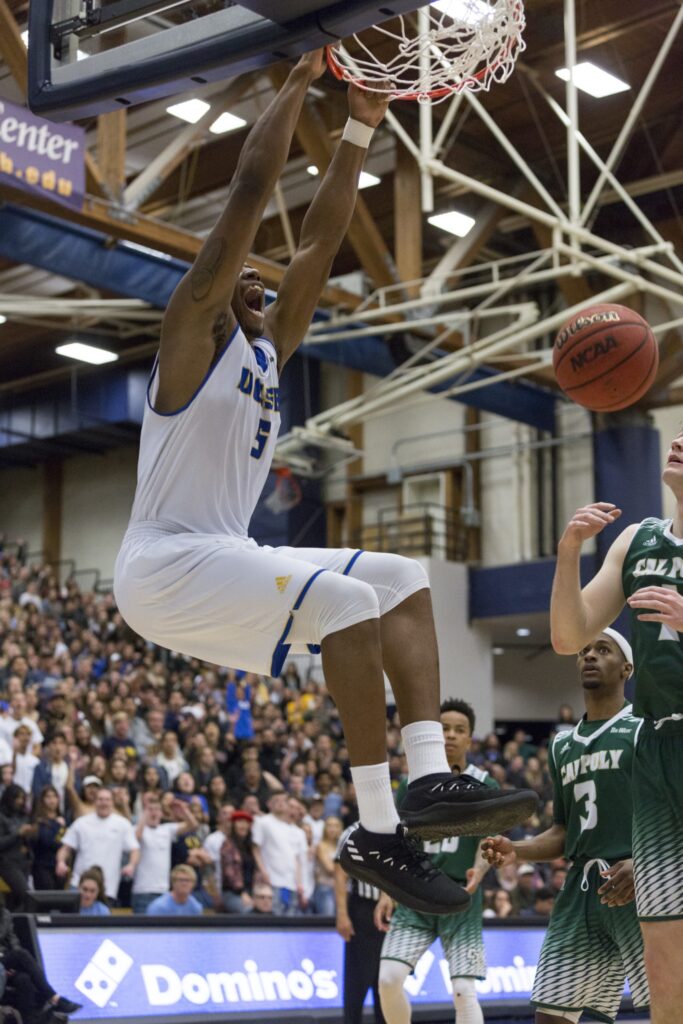 A year ago at this time, the UCSB men’s basketball team was sitting at home after a last-place finish in the Big West, watching the conference tournament kick off in Anaheim.

Just one year later, the Gauchos are the second seed heading into the tournament with first-year Head Coach Joe Pasternack at the helm.

It’s a remarkable turnaround, and one that seemed unlikely heading into this year’s campaign.

However, as things progressed and the Gauchos kept winning on their way to a 22-8 overall and 11-5 Big West regular season finish, the unlikely became reality.

Such a turnaround alone would make for a successful season. Now that they’re here, though, the Gauchos might as well keep things going.
The first step in that process comes on Thursday night when the team takes on Cal Poly in its first-round matchup at the Honda Center. Should the Gauchos take that game, they’ll be just two wins away from the Big West title and a spot in the NCAA Tournament.

Those other two games, however, aren’t on UCSB’s radar at all.

They’re focused instead on Cal Poly, as if this was any other week.

“We’re just focused on one game at a time,” Pasternack said. “We’re treating this like a normal Thursday-Saturday week, and we’re locked into this one game. We’ll worry about the next one if we win [on Thursday].”

Of course, it isn’t just a normal week, no matter what Pasternack says.

In a single-elimination tournament, even a game against No. 7-seeded Cal Poly has more on the line than any other game the Gauchos have played this season, but that doesn’t mean the team is completely new to the bright lights.

“We’ve played on big stages this season,” Pasternack explained. “We’ve played against Pitt, Texas A&M and USC, and we didn’t win but we were competitive. We went to UC Davis and got a big win. Our guys are battle-tested.”

UCSB really couldn’t have asked for a better opponent than Cal Poly to kick off the conference tournament.

The two teams met just this past Saturday, when the Gauchos dismantled the Mustangs 86-61 in the Thunderdome.

The Gauchos had one of their best offensive games in weeks, as those 86 points were the most the team had scored since Feb. 8, along with its 27 assists going down as a season-high.

“That game [against Cal Poly] gave our guys a great deal of confidence. They’re hungry to get back on the court,” Pasternack said.

Max Heidegger, UCSB’s leading scorer this season at 19.4 points per game, had a little bit of a bounce back game offensively against the Mustangs, something the team is hoping carries through into the tournament.

The sophomore guard had 23 points, knocked down five three-pointers and shot 50 percent from the field for the first time since Jan. 17.

“For Max, you have to look at his complete body of work,” Pasternack said. “You can’t get caught up in his last game or his last few games. He’s shooting 40 percent from three this season, and he’s got the defense focused on him. He’s a complete player, and he dominated on defense last game.”

The timely return of Jalen Canty two games ago gave the Gauchos just enough time to work the talented senior big man back into the lineup.

That’s important for a UCSB offense that flows a lot smoother with both Canty and graduate transfer forward Leland King II attracting attention inside, and for a defense that relies on Canty’s menacing rim presence.

Canty’s positive influence on the offensive end was obvious last Saturday against the Mustangs.

Having two major inside threats forced the Cal Poly defense to pull some of their attention away from the three-point line, something that didn’t happen much while the forward was out.

That was key in the Gauchos’ 86-point performance, which was more than enough offense given UCSB’s defensive performance.

The Mustangs shot just 39 percent from the field and had only two players score in the double digits.

One of those players was senior guard Victor Joseph, who led the Mustangs with 14.4 points per game, and had 16 points on Saturday, good for second on the team.
Junior point guard Donovan Fields, who averaged 13.3 points per game, typically seconds Joseph but on Saturday it was Josh Martin and his 20 points that shouldered the rest of the offensive load.

Cal Poly’s 9-21 overall record and 4-12 record in the Big West don’t do much to hype them up as a potential spoiler of UCSB’s title hopes, but both recent and not-quite-as-recent history suggests they still shouldn’t be taken lightly.

The Gauchos suffered a last-second loss in their first Big West game of the year at the hands of the Mustangs on Jan. 4, just over two months ago, which gave Saturday’s drubbing some revenge flavoring.

In 2015, UCSB took on Cal Poly in the exact same 2-7 matchup in the quarterfinals of the Big West Tournament, and just escaped with a 54-50 victory.

That tournament matchup was, of course, three years ago, and Saturday’s win turned the Jan. 4 matchup into history, but both games should give any UCSB fan or player looking past the coming contest reason to reconsider.

The turnaround from a year ago began with the final whistle of Big West play and the early April hiring of Pasternack.

Much of the success in fact, stems from the team forgetting what exactly they were bouncing back from.

“Our guys have just locked into the process,” Pasternack said. “They’ve had a chip on their shoulder for the last ten months, but they didn’t worry about last season. They’ve been focused on this one.”

While Pasternack and his players may claim to be focused on just the upcoming Cal Poly game, there’s no question that the whole tournament looms large.

Three tournament victories, and the Gauchos can put the ultimate cap on their remarkable turnaround.

UCSB takes on Cal Poly on Thursday night at 8:30 p.m. in the quarterfinals of the Big West Tournament at the Honda Center in Anaheim.