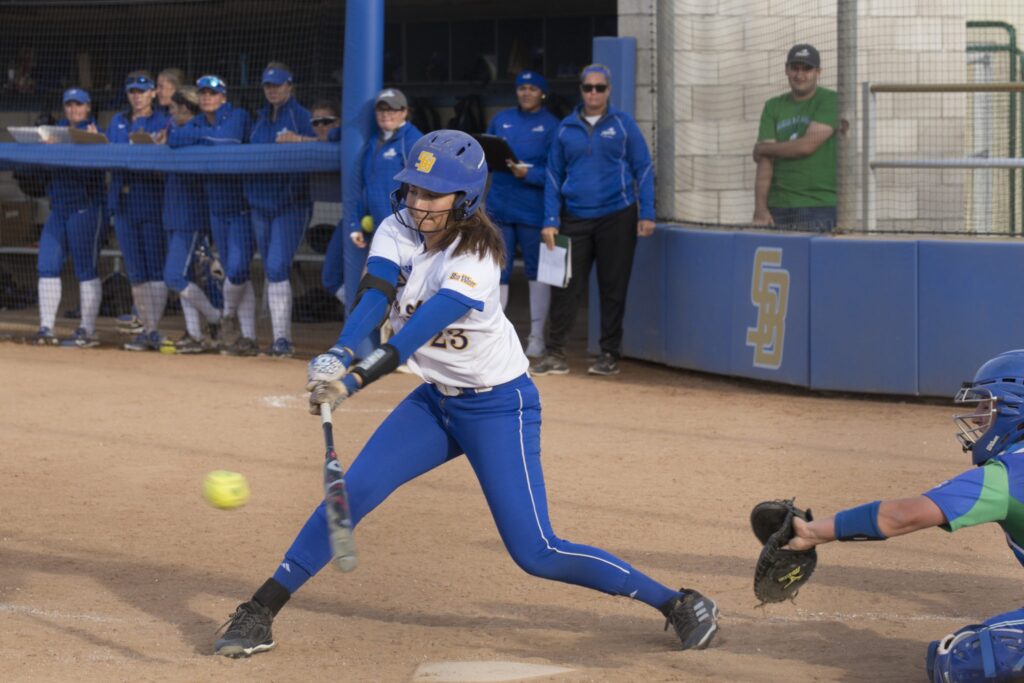 Following an unusually disappointing week for the Florida Gulf Coast Eagles after they went 1-4 in the Florida State University Unconquered Invitational, the trip to sunny Santa Barbara helped regain some footing as the Eagles swept the UCSB softball team in a doubleheader on Wednesday.

The Gauchos, now 8-14 overall on the season, couldn’t get their bats in a groove as Florida Gulf Coast showboated lights out pitching in a commanding style to blow past a struggling UCSB team.

FGCU now improves to 16-4 on the season and will look to carry over that momentum into the Loyola Marymount Tournament on March 8th.

The Eagles’ attack was spearheaded by junior southpaw Riley Randolph who wheeled and dealed in her start on Wednesday. Randolph blew past Gaucho batters and displayed a tenacity that the UCSB team was not accustomed to by tossing 6.1 scoreless innings while only allowing four hits in her sixth win of the season.

After her powerful pitching performance against the ‘Chos, Randolph now leads the Eagles with a 1.33 ERA on the season and sports a 6-2 record as a starter.

For UCSB, junior pitcher Veronika Gulvin was credited with the loss in the first game of the day. Gulvin allowed two runs over her seven inning, complete game outing. This, however, came without any help on the offensive side of the ball as she suffered her sixth loss of the season and she now sports a 3-6 record with a 4.20 ERA on the season.

Through the first four innings, the Gauchos were held hit less as the Eagles displayed end of the line defense and covered every inch of the ballpark.

Freshman infielder Maci Fines broke up Randolph’s no hit bid with a single in the fifth, but just as the Gauchos seemed to grasp a spec of footing, FGCU defense stepped up once again as senior catcher Samantha Lujan hit a shot to deep left field curving foul.

A sure hit that could’ve changed the complexion of the match was taken away when Eagles senior left fielder Kelsey Huff ranged over and covered 40 feet of field to lay out and make a spectacular diving catch to nab the second out of the inning to maintain a 1-0 lead over the ‘Chos.

In the bottom of the seventh, the Gauchos were down by two, threatening again with the bases loaded and one out to force a pitching change.

Freshman closer Taylor Bauman entered the game in relief and stopped the streaking UCSB bats in their tracks as she grabbed the final two outs of the game along with her ninth save of the season. Bauman now boasts a 0.59 ERA on the season in her freshman campaign.

The Gauchos came alive in the second game of the doubleheader as sophomore starter Morgan White only lasted three innings while allowing two earned runs on four hits. She was pulled with no outs in the bottom of the fourth after a two-RBI bomb by junior second base stand-out Sierra Altmeyer who hit her first home run of the season.

Freshman pitcher Marissa Mesiemore shined in relief for the Eagles posting two innings of scoreless softball and picking up the win in the process to advance her record to 7-1 on the season.

After taking over and shutting down the Gauchos in the fourth, freshman shortstop Haley Morrell blasted a homer to deep center field to break the tie and put the Eagles up by one and from there FGCU pitching took over.

The closer, Bauman, entered the game in the bottom of the sixth for the Eagles and completed a six-out close to finish out the back-to-back games with her second appearance of the day. Bauman also grabbed her tenth save of the season in the process.

For the Gauchos, they look to bounce back after their tough back-to-back losses against FGCU as they shift gears and head to the Bay to compete in the Bulldog Classic in Fresno, California.

UCSB will begin the tournament with doubleheader against Cal Berkeley and Fresno State on Friday, March 9th at Margie Wright Diamond.