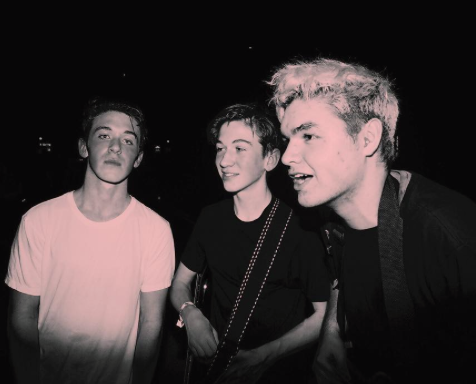 My first introduction to the sarcastically self-proclaimed Oakland “indie metal” band Mt. Eddy was at the Bay Area music scene staple 924 Gilman in Berkeley in 2016.  Even in their beginnings as a band, they were playing alongside established East Bay heroes SWMRS in a venue made famous by the Rock and Roll Hall of Famers Green Day, and they were already carrying with them a sense of community in their performances.

Before the band’s show with Heyrocco and King Shelter at the Velvet Jones on Feb. 23, I had the chance to meet up with vocalist and rhythm guitarist Jakob Armstrong, lead guitarist Enzo Malaspina, bassist and backing vocalist Kevin Judd and drummer Chris Malaspina to discuss changing names, adding members and self assigning genres all while scarfing down pizza in the dimly lit confines of Uncle Rocco’s Famous New York Pizza.

Recalling the band’s origin, Chris, “Jakob released songs on SoundCloud, and I hit him up a week later. I just saw him somewhere and I was like holy shit, he released these unbelievable songs, let’s get a band together.”

It was this original release by Armstrong under the name Jakob Danger that led to what is today known as Mt. Eddy.  Looking for a third member to round off the duo, Chris brought in his brother Enzo who juggled bass and guitar duties, often switching instruments halfway through sets.  Still under the name Jakob Danger and seeking a more complete feel, the band brought in Judd, asking him to join while under the impression that he actually knew how to play bass. And with the long sought after final addition, the band solidified its roster and recorded its debut album Chroma as a collective effort under their newly established moniker.

Although producing a modest crowd turnout at the Velvet Jones, what was lost in numbers was made up in passion. With loyal fans singing along to easily accessible hooks and the entire crowd head-bobbing to the smooth listening that is much of the band’s appeal, Mt. Eddy created an infectious community, making the concertgoers experience less about watching and more about participating.

Anthems like “Song and Fury” allowed those unfamiliar to the track to quickly catch on to its lyrics and sing along. Heavier songs like title track “Chroma” seamlessly switched from playfully shouted choruses to Malaspina’s drum-dominated breakdowns all too suited for the crowd’s heavy mosh pits. Perhaps it is this dynamic nature that makes the band so appealing.

As for the songwriting, the band said, “It’s  mostly Jakob, but we change the parts for our respective instruments.”

Performing two unreleased tracks from a three-track EP set to release on March 11, Armstrong said to the crowd: “We’re gonna try to play a new song that Kevin learned on the drive here. So be gentle.”

Each member’s personal presence on both songs is clear, with one track relying on a riff-soaked chorus led by Enzo and another with isolated vocals highlighting the complementary contrast of the rugged and the soft from Armstrong and Judd, respectively.  With the expressive drum stylings of jazz-trained drummer Chris, it’s no wonder why every song feels so complete and every fan seems so loyal.

Between the gifts, pleas for their setlist and screams from adoring fans, the relatively new band seems unphased. As for Armstrong, familiarity with fame and big names in the music industry is something he has lived with his whole life. With an album mixed by Grammy-winning audio engineer Chris Dugan, who Armstrong merely refers to as “my Dad’s friend,” it’s clear Armstrong’s background let him get his foot in the door of the music industry, and his independent musical talent allowed that door to stay open for future projects.

It’s this talent that created enough chaos to make the half-full Velvet Jones feel packed to the brim. With spilled drinks slicking the floor, sweaty faces shining in the light and surprise pushes from spur of the moment mosh pits, Mt. Eddy proved all you need is the music to forget yourself and enjoy the moment.

With half the band in high school and the other half in college, juggling touring and school has proved increasingly difficult.

With the impending release of a new EP, it seems opportunity for touring will only grow.

Branching out from touring with many of the Bay Area bands they are most associated with, Armstrong explained, “In Oakland we play the same venues with the same general bands. We just ask our friend’s bands to play. Now we’re submitting for different tours with different bands.”

Looking towards the future and contemplating the ever-subjective concept of genre, Armstrong said, “We’re writing all sorts of stuff … I think we’re heading towards surf rock but we’re also not … We’re definitely not straight punk.”

Some time went by until they all resolved, “We don’t know. That’s the answer.”

Still in the beginning of their career, Mt. Eddy has a lot of time to find that answer, and as long as they keep putting out music, we’ll have time to listen.