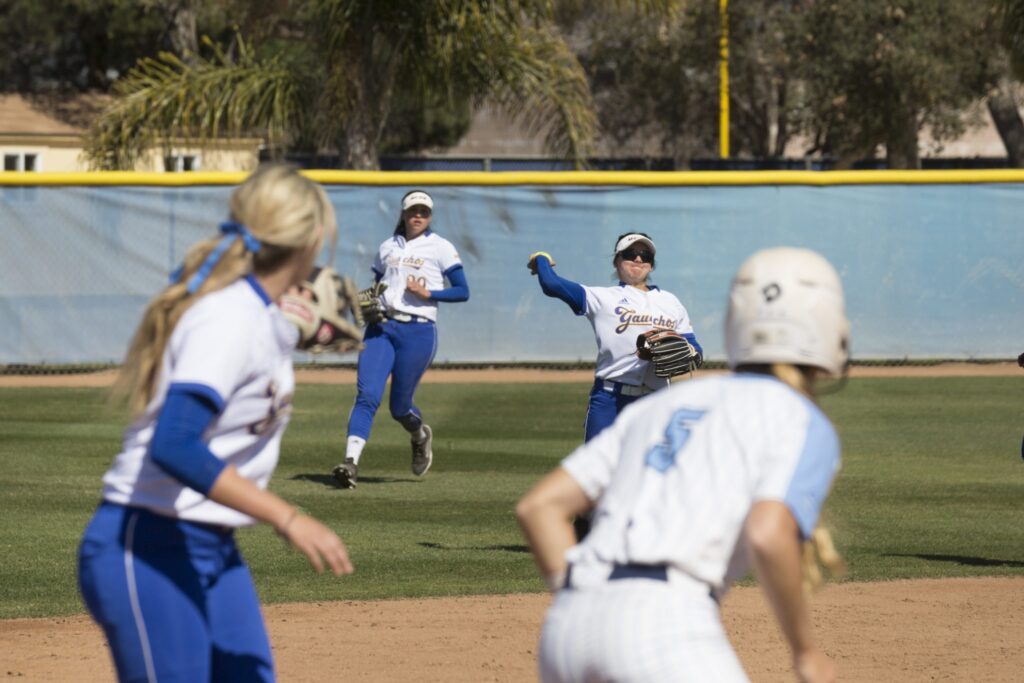 The UCSB softball team has a lot to prove as it heads back home from the Sunshine State for a double header against Florida Gulf Coast this Wednesday.

Following four disappointing losses and only a single win in the five-game Citrus Classic II, the Gauchos hope to regain some momentum and change the direction of their non-conference season thus far.

With an overall record of 14-4, however, Florida Gulf Coast will be a tough team to beat for Santa Barbara, whose record stands at 8-12 overall after the rough weekend.

Nonetheless, the Gauchos may have caught the Eagles at the perfect time. All four of FGC’s losses happened in its most recent series at the FSU Unconquered Invitational, consequently breaking its hefty 13-match winning streak.

Where the Gauchos have been notorious for both high-scoring wins and losses, the Eagles have kept their score-deficit low. In nine of their 13 wins, the team has scored five runs or less, and in 11 of the 13 wins it has kept their opponent to a score of three or below.

As a result, Florida Gulf Coast’s pitchers have each maintained a low ERA, cumulatively averaging 1.40. It is here that the Gauchos’ .347 home-team batting and lofty .484 slugging averages will be tested.

Looking to add to her 10-game hitting streak is freshman outfielder Sammy Fabian. Her now .455 batting average reigns high above the others and has proven to be a vital piece of UCSB’s offensive game.

Veteran infielder Sierra Altmeyer also has played a significant role in the latest series, finishing with five hits throughout the weekend. The senior doubled against Florida International and homered against Niagara on Saturday, contributing a run to the team’s only win of the classic.

Though it has not yet translated into many successful outcomes, Santa Barbara’s lineup as a whole looks very competitive against Florida Gulf Coast’s. Whereas six Gauchos have batting averages of .300 and above, the Eagles only have three.

Junior Racquel Fournet seems to be the most threatening of the three, boasting 19 hits and a .352 average. A permanent member of FGC’s starting lineup, the outfielder has driven in 10 runs for her teammates and has herself scored seven.

Following a weekend scattered with errors, unearned runs and multiple pitching changes, the ’Chos will need to adjust their defensive game.

In the five games played over the weekend, the pitching staff’s ERA capped at 7.62; on the season they average a 4.33 ERA. Comparatively, Florida Gulf Coast sports an aforementioned ERA of 1.40, as none of their pitchers individually exceed 1.80.

Left-handed pitcher Riley Randolph’s consistency and accuracy has played a key role in the defensive success of the Eagles. The junior powerhouse leads both her own team and the Gauchos in strikeouts — 41 to be exact — and has allowed just seven walks in her seven starts throughout the preseason.

Admittedly, one consistently strong pitcher like Randolph has not emerged from UCSB’s bullpen quite yet. The girls have instead depended on each other on a game-to-game basis; one pitcher rarely starts and finishes an entire game. In fact, in four out of the five games of the Citrus Classic II, the Gauchos’ opponents saw at least three members of the five-person pitching lineup per game.

All things considered, this double header has the potential to be a pivotal transition for the ’Chos. With the comfort of home-team advantage and fans to help them out, the team can hopefully pull together their offensive and defensive games to maximize their chance to add a few wins to their record.

The back-to-back games against FGC begins at 1 p.m. and 3 p.m., respectively, at Campus Diamond. Tickets are $11 for visitors.