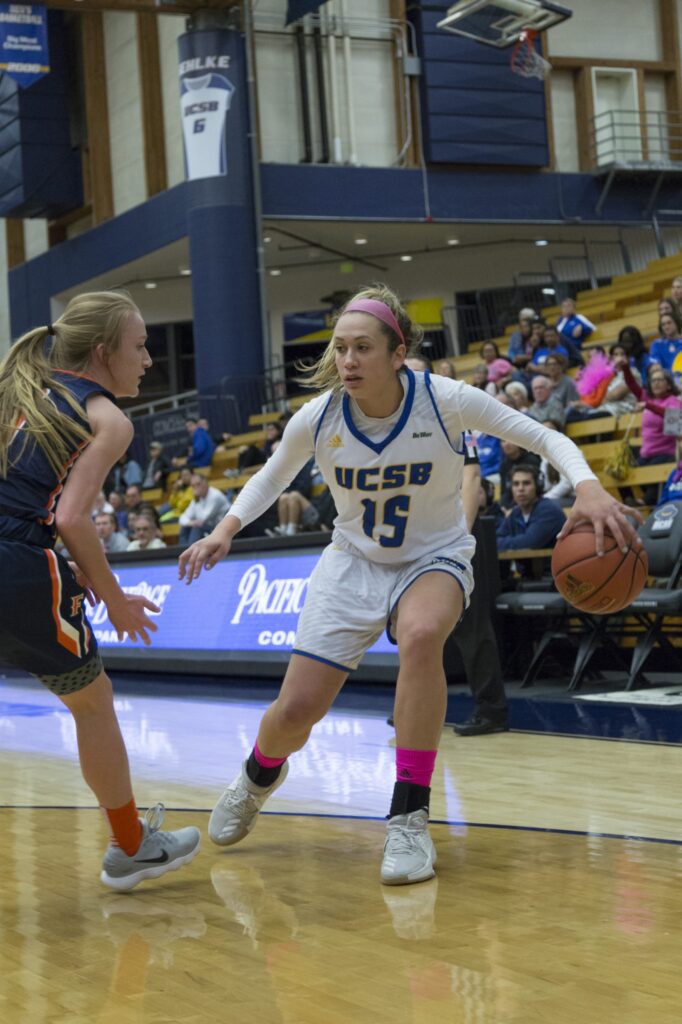 Following its loss to No. 8 Hawaii in the final game of the regular season, the UCSB women’s basketball team will travel to Fullerton, Calif., where they’ll be awaiting their second-round matchup. The Gauchos finished fourth in the Big West at 9-7 and closed out the season 12-16 overall. Considering that this team preparing for a playoff run lost nine games in a row earlier this season is remarkable and demonstrates Santa Barbara’s ability to adapt as well as the coaching staff’s ability to get the best out of players over the course of a season.

“This time of year you have to be familiar and dust off the cobwebs,” Head Coach Bonnie Henrickson said. “Knowing personnel sets what we need to do. It’s more about your effort, your activity level, your energy and your toughness at this point. We’ve got to manufacture some offense from the free-throw line and in transition.”

Due to the interesting playoff format of the Big West, UCSB doesn’t actually have a set opponent yet. The Gauchos have a bye for round one, in which teams seeded 5-8 will compete. Out of those four teams (No. 5 CSUN versus No. 8 Hawaii, No. 6 UC Riverside versus No. 7 LBSU), the two winners will advance to play either UCSB or No. 3 UC Irvine. Santa Barbara will take on the highest seed to advance while Irvine will take on the lowest. First place UC Davis as well as second place Cal Poly each receive a double-bye and will await the winners of the UCSB and Irvine games.

“[The season] really has played itself out to be an exciting week in tournament play because of so many single-digit games. Everybody’s got to show up and produce and bring what they can bring, and that gives you a chance” said Henrickson.

Despite losing both regular-season games to the Gauchos, Long Beach (6-10, 8-22 overall) is on a five-game winning streak that saw the 49ers take down their scheduled opponent for Tuesday night, UC Riverside.

The Highlanders (6-10, 9-21 overall), in spite of falling to Long Beach in the two teams’ most recent meeting, closed out their regular season with a 76-62 win over top-seeded UC Davis, the Aggies’ second loss in conference play.

While the Gauchos can rule out facing Hawaii in the second round, they know they’ll play Northridge (8-8, 15-15 overall) given that the Matadors win against the Rainbow Wahine. Northridge’s Channon Fluker, a junior center and the Big West Player of the Year for the second consecutive season, leads the Big West in rebounds, double-doubles, blocked shots and free throws made.

The Matadors obviously rely on Fluker on both ends of the floor, as she’s also averaged 18.9 points per game. On Jan. 31, Northridge defeated UCSB in the Thunderdome 48-30, a game in which Fluker had 15 points, 12 boards and 5 blocks. The Gauchos were held to their lowest field-goal percentage in program history, converting on only 20.3 percent of shots.

“We didn’t attack, we took some ill-advised shots, but we’ve got to get some touches in the paint, some kick-outs and some rhythm,” said Henrickson. “We need to execute down the stretch, get them off the glass.”

Although the Gauchos dropped their final regular season game in Hawaii, Santa Barbara holds a determined mindset heading into the postseason.

The Gauchos will face either Riverside, Long Beach or Northridge on Wednesday, March 7, with tip-off scheduled for 8:30 p.m. With a win, UCSB advances to face either UC Davis or Cal Poly in the semifinals. Games will be broadcast on ESPN3 as the Gauchos aim to return to the Championship, where they lost to Long Beach last year.