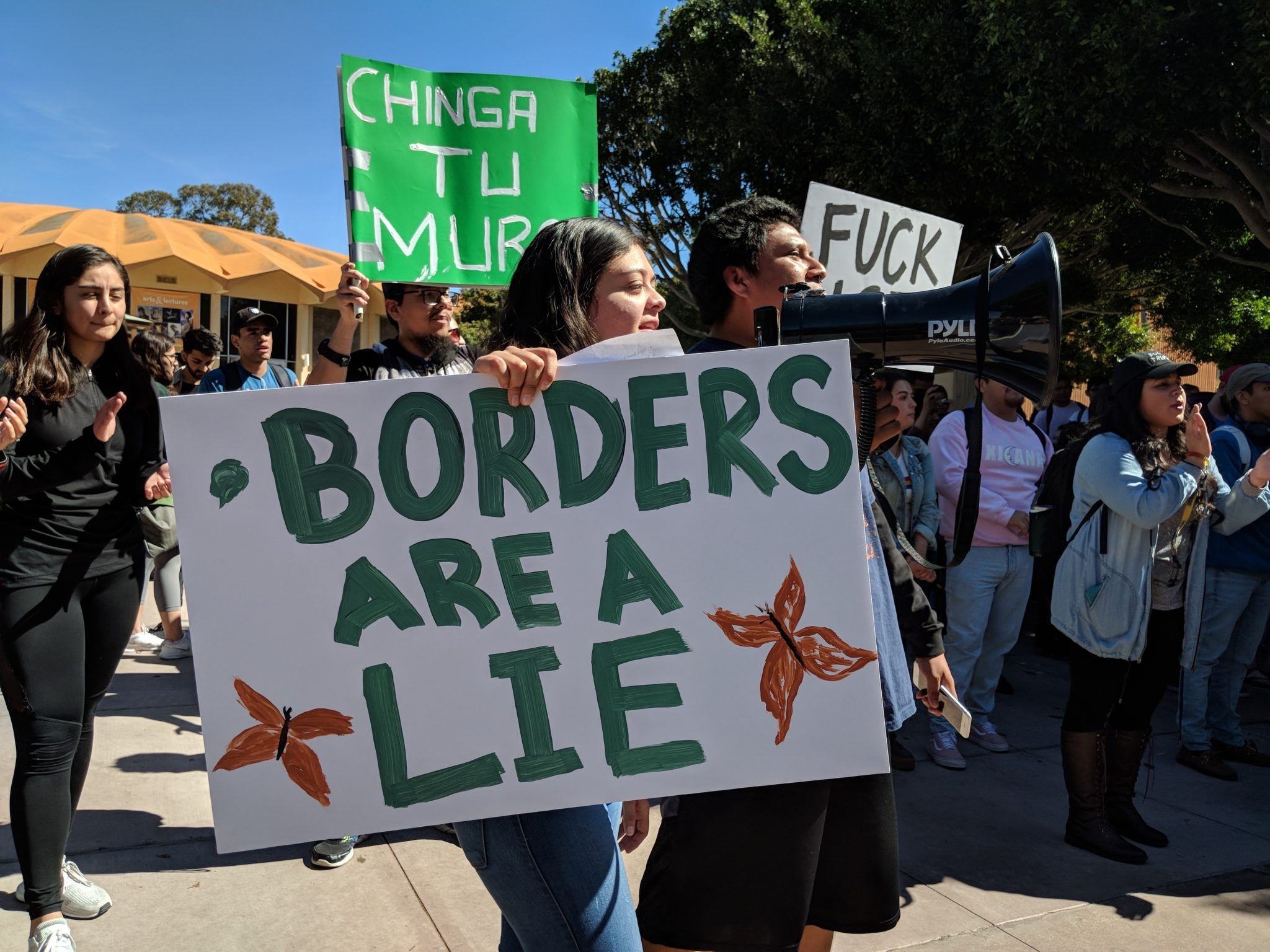 About 200 UC Santa Barbara students walked out of class on Monday afternoon in support of undocumented students, urging for immigration reform within the United States and for better resources for undocumented individuals at UCSB.

The protest, organized by UCSB’s Improving Dreams, Equality, Access and Success (I.D.E.A.S.), began at Storke Tower. Students and faculty members then marched through the Arbor walkway to Cheadle Hall, where they briefly walked inside before gathering outside of the building.

“At the end of the day [DREAMERS] are in a prison. We’re in a system that doesn’t allow us to fully exercise our rights and benefit from the things we deserve,” third-year Chicanx studies major Jose Sanchez said.

“I am very proud of our students and community today,” Office of Student Life Associate Director Danielle Quinones said in an email.

She explained that she originally asked students not to enter Cheadle Hall because of the “safety of the participants” due to the building’s “compact” corridors, but later was “proud to hear their voices echo throughout the building.”

“I thought I was always part of the same society, but then you realize when you go to school that you don’t have healthcare, you don’t have Medicaid, [and] if queer people get HIV you don’t get money for that either,” Sanchez said.

Protesters also created several signs for the protest, some of which read, “Keep families together,” “No borders, no walls, #end I.C.E.,” “Borders are a lie,” “Here to stay” and “Education not deportation.” 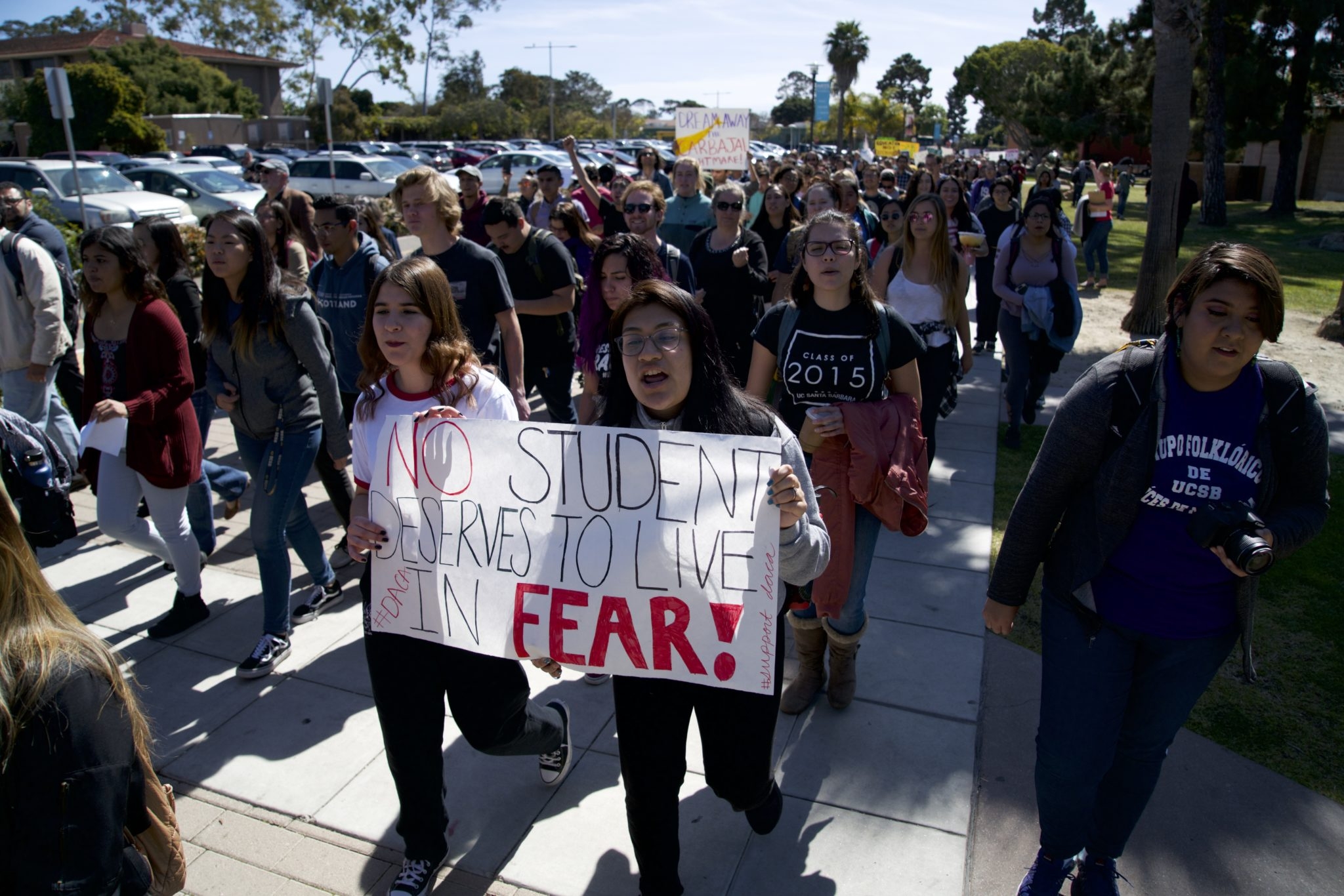 Protesters marched through the Arbor walkway on their way to Cheadle Hall. Sicheng Wang / Daily Nexus

The Federal Deferred Action for Childhood Arrivals (DACA) program was scheduled for termination on Monday, but a Supreme Court ruling in late February ensured that current DACA recipients can continue applying for renewals as a University of California lawsuit against the Donald Trump administration continues.

Several signs referenced Congressman Salud Carbajal, stating that he “voted no on DACA” and is “against DREAMERS.”

In January, Carbajal voted for a spending bill that would have prevented a government shutdown over DACA. He later defended his vote as a “good conscience” decision to make sure the Central Coast continued receiving federal disaster relief. He also said protecting DACA recipients was one of his top priorities.

Numerous undergraduate and graduate students and faculty spoke to the crowd, telling their own stories about dealing with immigration within the U.S. 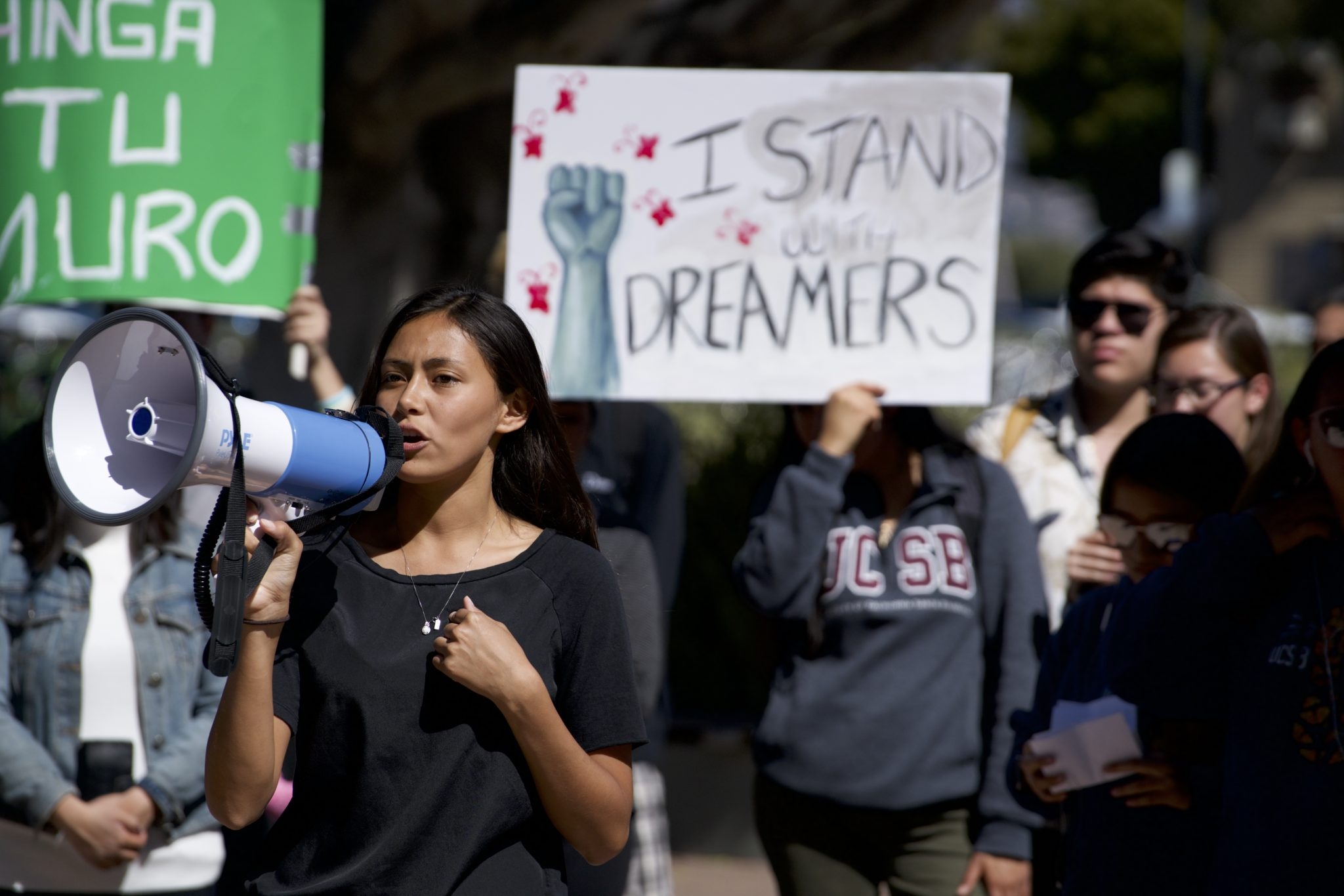 Several undergraduate and graduate students and faculty spoke to the crowd, telling their own stories about dealing with immigration within the U.S. Sicheng Wang / Daily Nexus

“I am an undocumented grad student, so I’ve been always active,” first-year communications doctoral student Monica Cornejo said. “I think it’s important that we start mobilizing at different institutions to make sure that immigration reforms happens.”

“I want to say the support is for everyone. We have to think of those who died at sea and in the desert to get here,” second-year linguistics major Karina Javier said.

I.D.E.A.S. passed around a petition during the walkout that the group had previously presented to the UCSB administration, calling for the university’s support for the needs of undocumented students.

One of the co-chairs of I.D.E.A.S., who asked to be referred to as Sam, said in an email that the demands include “a permanent, expanded space for undocumented students, an attorney on campus that takes care of undocumented students’ immigrant cases, and a campus wide employment program that does not require a social security number.”

“We want an attorney because of the expected growing need of immigration cases due to expirations of DACA, the abundant ICE raids all across CA and the country, and the unexpectedness of immigration legislation and policies under the current president,” Sam said in an email.

Sam added that I.D.E.A.S. also wants a center on campus “because we want to make sure that undocumented students have a space on campus where they can befriend, network, support, and feel safe.”

“A lot of us feel like we’re not getting the support we need from the university to move on,” fourth-year communication and psychology major Dayanna Yanez said. “We feel like it’s really unstable, the situation we’re in right now and the environment.”

“There’s an anti-immigrant sentiment in this country,” fourth-year sociology and chicano studies double major Alex Gutierrez said. “I think this protest in particular is trying to highlight the fact that it’s not just DACA recipients that are trying to fight for their civil rights, but also undocumented immigrants of all backgrounds.”

Carbajal Voted No On DACA! There are no excuses. ‘Top Priority’ my ass.

What kind of conscience does Carbajal have if he is once again going against his campaign promises? HE ALWAYS SAYS HE IS PRO DACA YET HIS ACTIONS SAY OTHER WISE. sounds like another BS excuse.

Hope I dont trigger you

“Borders are a lie” lol what an idiot

Carbajal is a liar who only cares about the person signing his checks! If DACA wants Carbajal’s support, THEY BETTER PAY UP $$$$$$$$$$ #swampysalud

I generally support a pathway to citizenship for DACA recipients and eligibles, but the rhetoric, signs, and chants at this “protest” are steering my ambivalence against it. “Borders are a Lie,” seriously? You mean it’s a lie until it affects the sovereignty of Mexico, or some country other than the US? I saw a sign that read “Put Avocados on Racism so white people pay attention,” that’s not going to keep white allies on your side. In an effort to sound clever and topical you’ve come off as ethnocentric and entitled. It’s no less racist than if someone were to… Read more »

I could not agree with you more. These idiots may well turn me away from my support of DACA

Try this nonsense in Mexico and watch what happens. The policia will be on you in short order. And no more free lunches – American citizens FIRST.

Please set up a safe space for illegal aliens so we can tell ICE where to go. Trump offered DACA+1.5 million more and the democrats said no.