The Daily Nexus
Tennis
Men’s Tennis Returns Home in Hopes of Ending 2-Match Skid
March 1, 2018 at 5:01 am by Brandon Victor 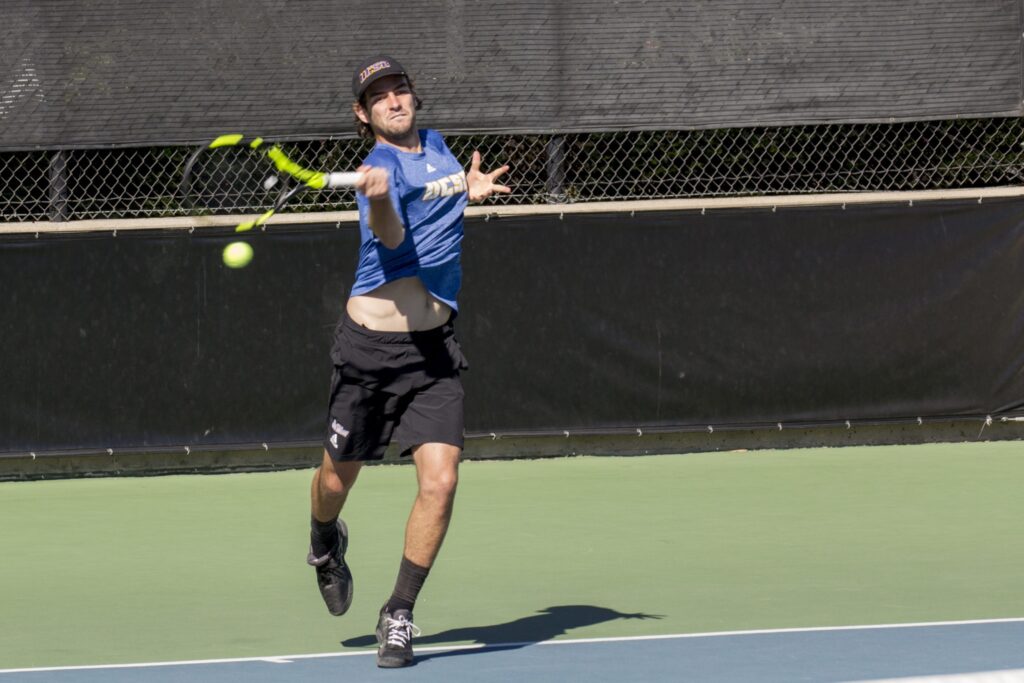 After two disappointing road losses, the UCSB men’s tennis team will look to bounce back at home Saturday against St Mary’s.

In particular, the Gauchos were devastated by their loss against New Mexico on Sunday, a match in which they held a 3-0 lead. But the Lobos rallied all the way back, and senior captain Simon Freund, who was playing through an injury, couldn’t keep his lead on court two.

With the availability of Freund in question for the match, Santa Barbara will have to lean on its younger team members to come away with the victory. In particular, they will look to standout sophomore Joseph Guillin to right the ship should Freund miss time.

Guillin has been a surprise revelation for the Gauchos so far this year, winning seven singles matches in a row heading into the matchup with the Gaels and sporting an 8-1 overall mark.

“[Guillin] has demonstrated he’s going to win at the three and four position, but we’d like to move him up high and see what his top end is,” Head Coach Marty Davis said. “His tennis IQ is super high, and he sees the game well which means we don’t have to spend time coaching him during matches.”

While St Mary’s enters the match with a 2-5 record, they are coming off a 4-3 victory over Grand Canyon in their last match.

In addition, while UCSB defeated the Gaels 7-0 last year, four of the six singles matches went to a third set, and another was forced to drop out because of injury.

This year, St Mary’s returns much of that team, including their top two players, sophomore Damon Kesaris and senior Nash Vollenweider.

“Their top two players are both really good, and they’re definitely better than their record shows,” Davis said.

In particular, Kesaris has been playing dominant tennis this year. Last year, the South African was named the WCC freshman of the year, as well as All-WCC first team singles.

This year, he has built on that success, kicking the season off with a 6-1 record in singles. Junior Nicolas Moreno de Alboran barely beat him in three sets last year, and the rematch should prove to be an entertaining bout on court one.

The court one doubles duo of Kesaris and Vollenweider will also pose a challenge to the Gauchos; last season, the two were named All-WCC honorable mentions for doubles.

With Moreno de Alboran and junior Anders Holm playing well on court one, that matchup should also shape up to be a nail-biter.

Where the Gaels have struggled, however, has been on the lower courts. In two of their seven matches this season, Kesaris was the only player on the team to notch a victory. If the Gauchos are to pull off the victory on Saturday, they will have to depend on Holm, freshman Viktor Krustev and junior Hironori Koyanagi to win their individual matches.

In his return from injury last week, Krustev went 1-1, losing his match against Utah but winning in straight sets against the Lobos.

He will need to build on that momentum on Saturday for UCSB to alleviate pressure off of Moreno de Alboran and Guillin.

For the Gauchos, this match will be their first of four in the next two weeks because of their reshuffled schedule following the Thomas fire.

Less than 24 hours after the game, the team will leave to Tucson to take on the University of Arizona.

Santa Barbara currently holds a 6-0 record in the all-time series against St Mary’s and will look to remain unbeaten against the Gaels.