The Daily Nexus
News
Is It Cool to Juul? UCSB Administration Says No
March 1, 2018 at 12:52 am by Spencer Sween

The use of vapes, also known as e-cigs, has surged in populations of college students across college campuses as an alternative to cigarettes, according to Center for Disease Control and Prevention. 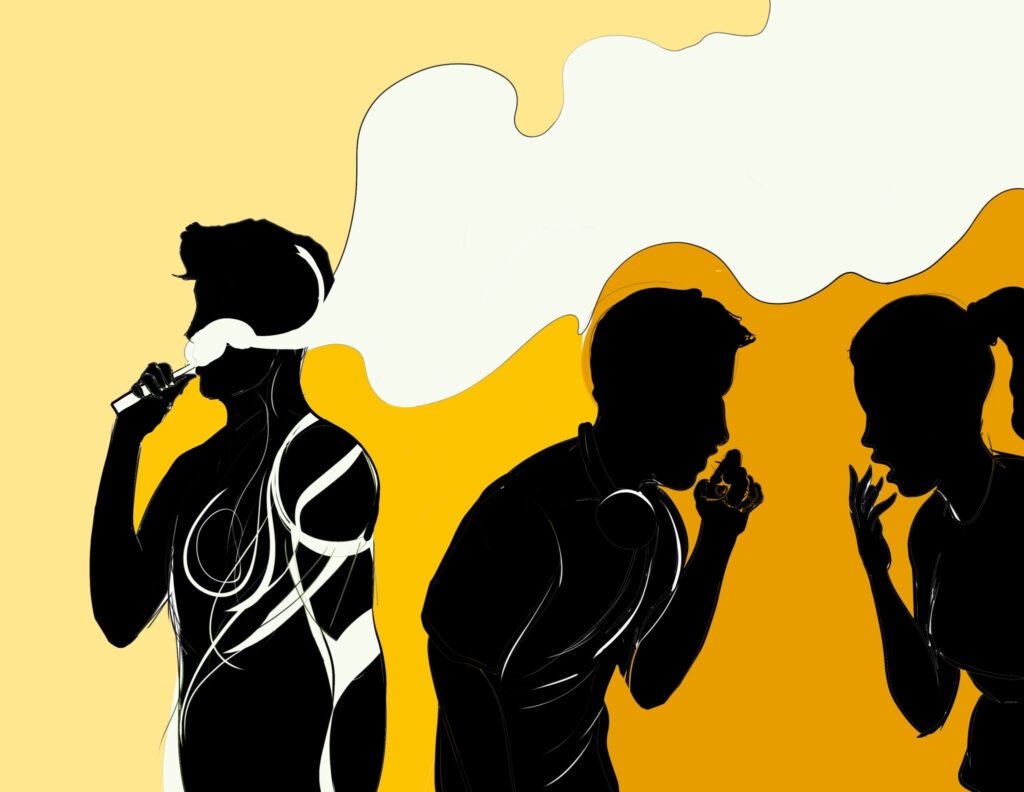 Vapes are a new type of liquid-based smoking devices that contain strong concentrations of nicotine within them. According to the California College and University Smoke/Tobacco-Free Policy Report Card, secondhand “e-cigarette aerosol is a new source of volatile organic compounds (VOCs) and ultrafine/fine particles.”

Studies from the Center for Disease Control (CDC) and the UC Office of the President reveal that around 16 percent of the college-age population and 8 percent of University of California students vape or handle similar nicotine products. The Report Card also says that in Calif., young adults are three times as likely to use e-cigarettes than adults over 30.

Devices like JUUL, PHIX and similar models are among the most common e-cig products in use among students.

According to the Report Card, UC Santa Barbara is 100 percent smoke and tobacco free, including e-cigarettes. Despite this, UCSB has not escaped this new fad, and these devices “are a rising concern for UCSB,” according to UCSB’s Alcohol and Drug Program.

The CDC and the Santa Barbara County Public Health Department warn that these products can hurt the respiratory system “just like traditional cigarette smoke can,” and the addictive properties of the chemical make it just as harmful for psychological health.

Madison Barnes, a tobacco cessation educator at UCSB, explained that the consequences of vaping are normally not taken into consideration by users.

“Vaping and e-cigarettes are a rising concern for UCSB as many students believe they are a healthier alternative to smoking cigarettes,” she said.

Currently, UCSB actively works towards limiting use and providing various resources to get addicted students off these products.

One of these resources is the Alcohol and Drug Program, which offers support services to students that include free addiction cessation products and psychological advising in order to help afflicted students.

But even with the seeming decline of traditional smoking use and the ongoing efforts of UCSB’s administration to limit other forms of nicotine consumption, major challenges still remain to halt addiction across the student population.

One student, who asked to remain anonymous due to housing regulations, explained that the dissipating smell of the vape and the strength of the nicotine makes it an ideal illegal substance in small areas like the dorms.

However, because of the high nicotine concentration in the devices, vapes can make users extremely susceptible to addiction.

Nik Babourine, first-year mathematics major, said he has met students in the Santa Catalina halls “that can’t even stay focused in group study sessions because they need to leave to get their Juul.”

Michael Takahara from UCSB’s Smoke and Tobacco Free steering committee explained that efforts to keep students from consuming nicotine will counter efforts of companies that supply these products.

“New ways of delivering nicotine to the body will continue to evolve as the Tobacco Industry works at creating new life long customers,” Takahara said in an email.

As newer methods and trends of nicotine consumption rise, UCSB’s various support services and policymakers “will continue to learn about them and address them” for the foreseeable future, Takahara said.