The Daily Nexus
Science & Tech
Climate Change One Step At a Time
March 1, 2018 at 1:05 am by Stephanie Pernett

Despite the U.S.’s withdrawal from the Paris Agreement on climate change mitigation, an agreement within the United Nations Framework Convention on Climate Change (UNFCCC) dealing with greenhouse gas emissions mitigation, adaptation and finance set to start in the year 2020, makes it seem as though President Trump’s decision has not hindered the carbon neutrality movement.

An example of the determination in reducing our carbon footprint can be seen right on our campus.

A 27-member team composed of researchers, facilities managers and students from across the UC campuses, including UC Santa Barbara, have released a report that presents a feasible strategy to help achieve carbon neutrality by replacing natural gas with more climate-friendly options.

The University of California launched its Carbon Neutrality Initiative in 2013, aiming for carbon neutrality by 2025. However, how the UC system will hit its target is uncertain.

For now, the UC carbon neutrality pledge applies to direct emissions from UC-owned infrastructure and indirect emissions associated with the purchase of electric power. Indirect emissions from employee-owned vehicles, off-campus computing, air travel and those embodied in consumer goods and services are subject to long-term goals but actionable plans will require more leadership. 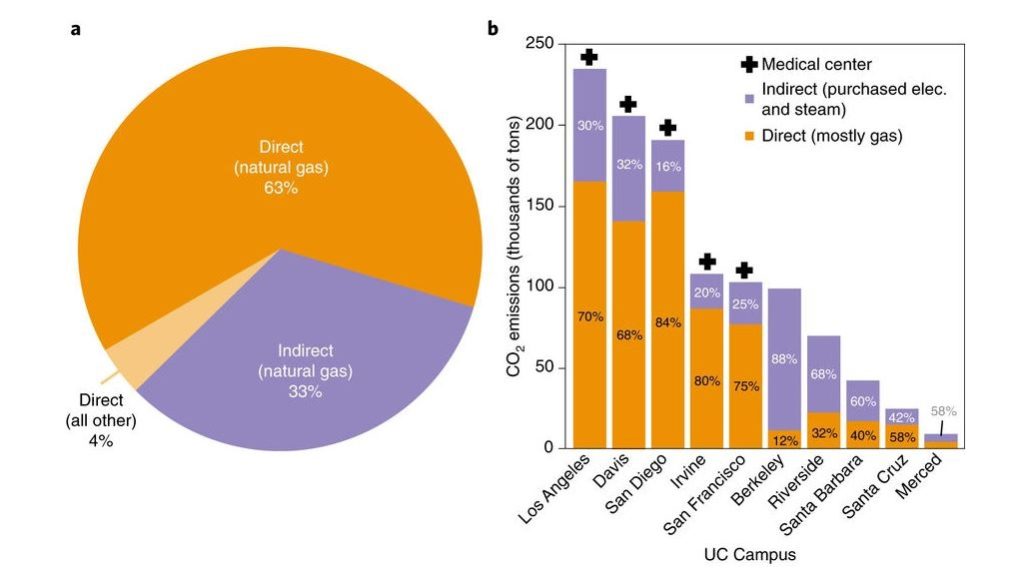 Graph A shows natural gas burned on UC campuses accounted for 63 percent of the university’s CO2 greenhouse gas emissions, including both direct emissions and indirect emissions related to purchased electricity and steam. Graph B shows the magnitude and share relative to each campus of natural gas emissions varies across the 10 UC campuses according to their size and climate, with all five of the largest campuses having medical centers. / Courtesy of nature.com

As the UC is focusing on its own emissions, gas is central. It accounts for 96 percent of emissions. About half the UC campuses have gas-fired power plants and combined heat and power systems that save money through self-generation of energy services. The other half of the campuses are typically smaller, and most of their emissions come from purchased electricity.

In California, essentially all carbon emissions from the electrical grid come from burning natural gas, which accounts for 60 percent of the state’s power generation; the rest of the grid is operationally emissions-free. In California, and increasingly in the broader US power sector, decarbonizing electricity is about natural gas.
The report’s three-step plan to reduce the UC’s consumption of natural gas entails aggressively increasing energy efficiency across all 10 campuses and five medical centers and in the short term replacing natural gas with biogas. In the long term, the goal is to electrify all end uses of energy and switch to only renewable sources.

“Economically, energy efficiency is a no-brainer,” David Auston, director of the TomKat Foundation-funded project, a researcher at UCSB’s Institute for Energy Efficiency (IEE) and a senior fellow at the campus’s National Center for Ecological Analysis and Synthesis (NCEAS), said. “Not only is it wise to do it because it saves money, but those funds can be used to make investments in other things like electrification and biogas.” 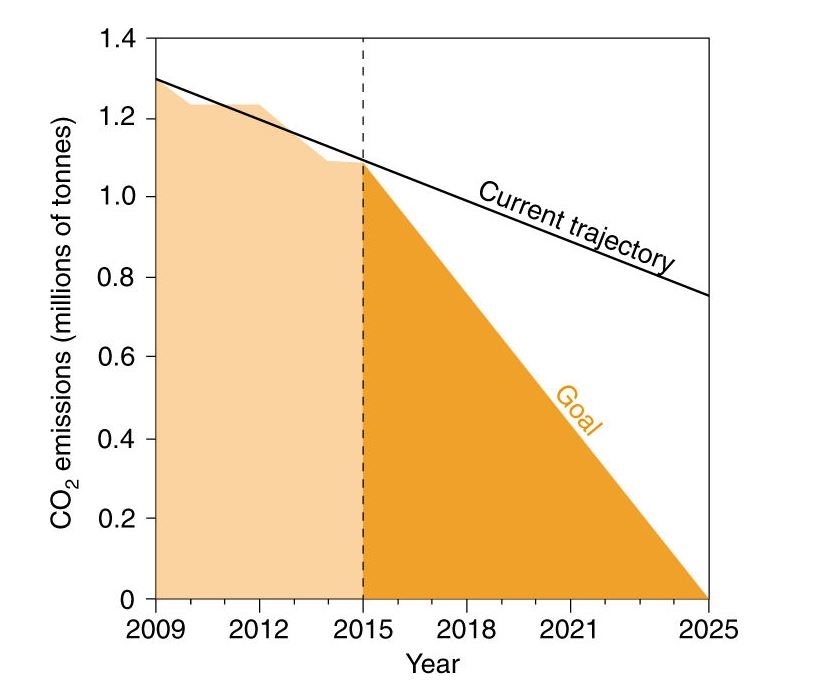 The graph above shows the UCs’ recent rate of progress toward eliminating carbon from operations since 2009. Progress in bending the curve downward is anticipated from 2016 to 2018 based on solar PV coming on-line and biogas development. / Courtesy of nature.com

The first step in the report is to reduce energy use by retrofitting existing buildings and designing new buildings to be highly efficient and all-electric rather than reliant on gas-fueled systems. According to the report, well-planned energy efficiency investments pay for themselves through avoided energy costs.

By the researchers’ estimates, additional retro-fits could cut UC electricity use by 38 percent, and natural gas by 29 percent.

The second step is to replace conventional natural gas with less emission-intensive alternative fuels that would allow continued use of gas infrastructures.

For example, UC San Diego purchases biogas credits from a sewage treatment plant on Point Loma, about 15 km away, while burning conventional gas to power a fuel cell.

“We view biogas as an interim measure that buys us more time,” Auston said. “Ultimately, it must be phased out and replaced by 100 percent electrification.”

The last step is electrification. The UC system is procuring more zero-emission electricity, a practice that is typically implemented by purchasing wind and solar energy. UC’s campuses now include more than 50 megawatts of on-campus renewable electricity generation and 80 megawatts of utility-scale solar generation from sites in remote Fresno County. Buying zero-emissions electricity to supply existing power loads is relatively straightforward and does not raise many organizational or financial barriers.

Independent from the UC’s Carbon Neutrality Initiative, the report and paper are part of the larger TomKat Carbon Neutrality Project to identify practical, bottom-up strategies for meeting the 2025 deadline. This effort was funded by the TomKat Foundation and the UC Office of the President (UCOP) and co-led by UCSB’s NCEAS and the IEE. Additional financial support for the report came from the Center for Information Technology Research in the Interest of Society and the Banatao Institute.

After years of global talking without much action on climate change, the good news in Paris is that there is now a framework for leaders and followers alike to get serious about deep cuts in emissions.