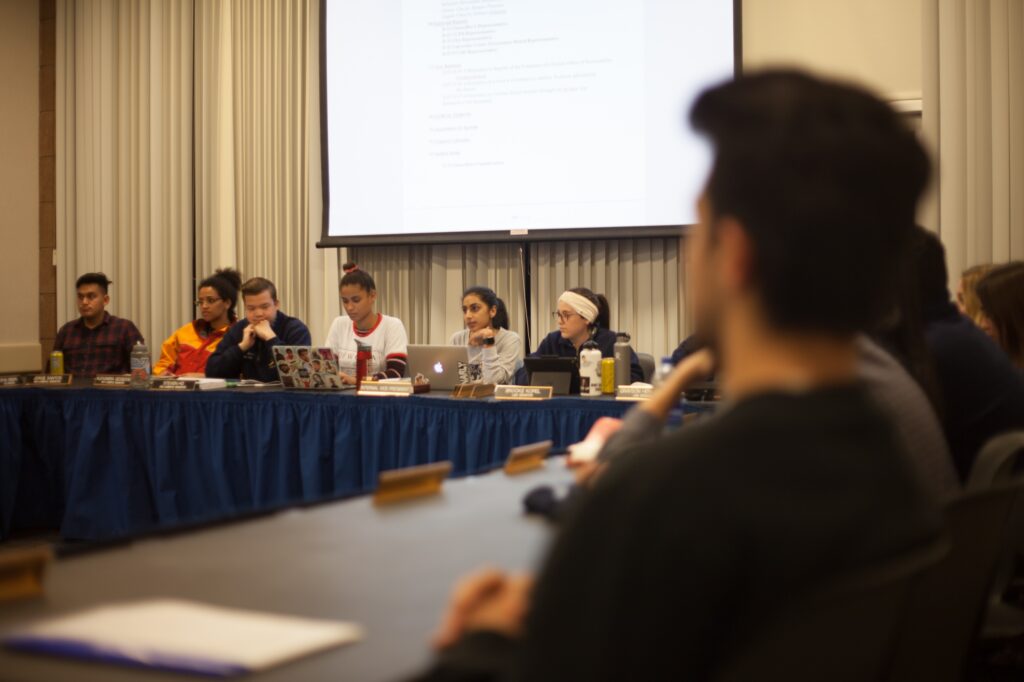 With the list of demands from the university, undocumented students will get much-needed resources close to home. By providing a safe space and a location to receive assistance, A.S. reinforces Dreamers’ inclusion in the UCSB community. Lianna Nakashima / Daily Nexus

The resolution was authored by A.S. Senators Steven Ho and Brandon Mora and sponsored by fourth-year psychology major Lezli B. and fourth-year economics and accounting major Karla L.

I.D.E.A.S. previously presented their demands to UCSB Vice Chancellor Margaret Klawunn, but there has been “little action [taken],” Lezli said.

They will be meeting with the administration on Friday to further discuss these demands.

“We just want administration to know that it’s not just [I.D.E.A.S.] behind this. We hope that the administration sees this and sees the importance of [the resolution] because we’ve been trying to get these demands passed for a while,” Karla L. said.

The list also includes a proposed expansion of the current center for undocumented students on campus, the Monarch Lounge, which opened in April 2017.

Plans for the expansion of the Monarch Lounge include adding an additional study space, a conference room, an office for the Undocumented Student Services (USS) Coordinator, an office for the immigration attorney, a front desk, kitchen, gender-neutral bathrooms and a workspace for an USS intern.

These demands are expected to “[improve] the quality of life for undocumented students on campus,” according to the resolution.

According to the resolution, “undocumented students account for at least 800 undergraduate students” and over 800,000 Dreamers are currently affected by the repeal of DACA, putting these students in “vulnerable” positions.

The resolution also addressed UCSB and Isla Vista’s history of I.C.E. raids and the overall fear undocumented students may experience on campus.

Opportunities for undocumented students are limited because most jobs and internships require a social security number, the resolution states.

Financial aid is also limited and often doesn’t meet the needs of undocumented students, according to the resolution. The status of these students also impacts their ability to secure housing and sources of income.

“We’re glad this is a step forward to know that there are leaders of our student body supporting us,” Karla L. said.

Legal support for undocumented students on campus is available through University of California Immigrant Legal Services Center, which operates out of the UC Davis School of Law.

Attorneys from the center visit UC campuses two to three times a quarter, according to the law school’s website.

According to the resolution, the only attorney UCSB students have access to is currently located at UC San Diego and is “constantly overbooked.”

“Many of us will not be able to pursue a life in the U.S. We should equally benefit and experience that UCSB aims to provide for every student,” Karla L. said.

So, our state is bucking federal law and the university system is going to be using our tax dollars to hire attorneys for illegal aliens? What a strange little bubble we live in.

How about the 800 illegals go pick strawberries one weekend a month and pool their money for legal fees, instead?

Something is really wrong with our country. We put so much resources on illegal immigrants,. There are many middle class familiies not even quality for any aids, but then all these illegal immigrants reap so much financial aids. And that they have so much rights to voice out their needs…. amazing. If your parents bought you here illegally, then it is their fault and why are everybody else has to pay the price.