The Daily Nexus
Sports
UCSB Comes from Behind in Exciting Senior Day Victory
February 24, 2018 at 9:44 am by Kendra Jackson 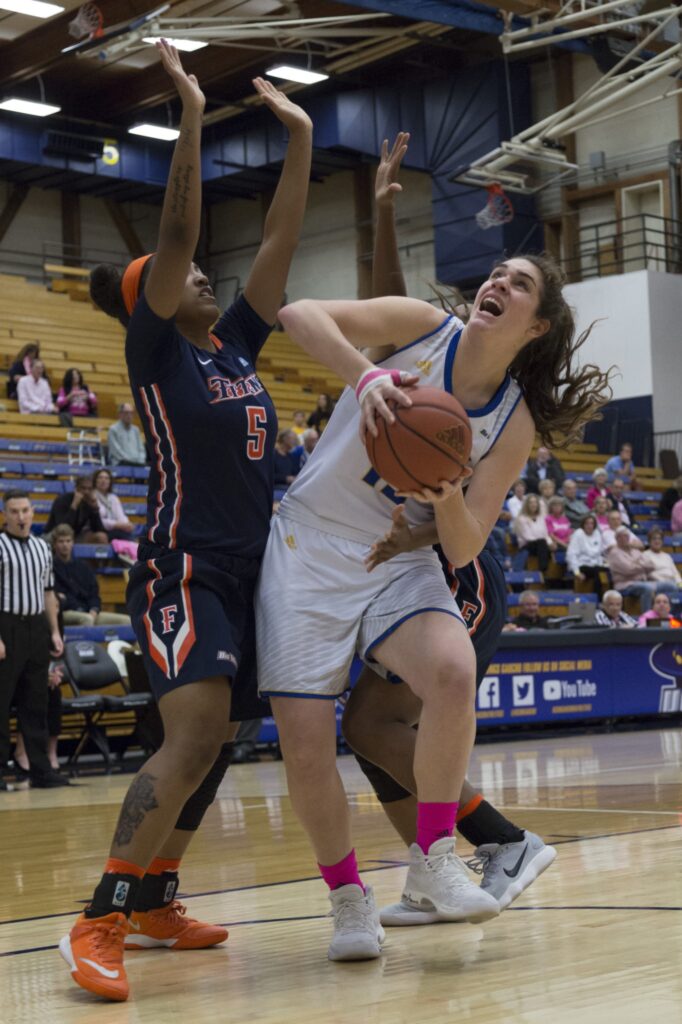 It was Senior Night in the Thunderdome on Saturday, and the crowd was rocking. Just when the game seemed to be heading for overtime, seconds were put back on the clock, and the UCSB women’s basketball team came out with the win.

The seniors were all set for sendoff, as small forward Chaya Durr, forward Drew Edleman, guard Makala Roper, and point guard Drea Toler all accepted accolades for their tenure with the UCSB women’s basketball team right before their final home game of the regular season.

Up against UC Riverside, the Gauchos managed to use a forceful balanced attack to come back and win the game 72-20, within the last few seconds.

Trailing for most of the game, the Gauchos struggled initially, allowing their opponents to shoot at nearly 50 percent shooting.

It was 35-24 at the end of the first half, the visitors having the 11-point advantage over their opponents.

Riverside had some monster performances by senior guard Michelle Curry, and redshirt senior guard Lauren Holt. Curry racked up an amazing double-double, scoring a game-high 31 points and 14 rebounds, while Holt had a well-rounded 5 rebounds and 5 assists to go along with her 21-point performance.

Edelman had another dominating double-double night, draining a team-high 27 points, and grabbing 14 boards, which was tied with Riverside’s Curry for the most in the game.

With just under 9 minutes left to play in regulation, UCSB trailed by 11, the score sitting at 53-42 in favor of the road team.

The fourth quarter began to heat up for the Gauchos, as Edelman and redshirt sophomore guard Tal Sahar combined for an explosive 25 of the team’s 32 points in the last quarter. Despite their valiant effort, though, the home team still trailed by six, the score 68-62 with only 41 seconds left to play.

Sahar scored a clutch three-pointer from beyond the arc, and after the opponents scored, Sahar attempted to drain another shot from downtown, but was fouled and knocked down all three free throw attempts, to bring the game to 69-68, UCSB behind by just 1 point.

After the Highlanders were fouled and scored just one of their two free throws, redshirt junior guard Sarah Porter passed the ball to Edelman who had a good look and shot the ball in to tie the game up at 70, with just 8 seconds left on the clock.

Curry attempted a shot to take the game for UCR, but the shot fell out of bounds, possession then belonging to the home team.

It looked as if the Gauchos would be set up to play their first overtime game since the 2014-2015 season, but that turned out to not be the case.

While regulation seemingly ended with the score tied up at 70-70, the officials put 1.5 seconds back on the game clock after review.

That last second and a half was sufficient enough for the home team to get the walk off win.

Toler inbounded the pass to freshman guard Sarah Bates who was fouled and forced to leave the game after being injured on the play.

Coming in to complete the play by shooting her free throws, Bates knocked in both attempts, allowing UCSB to win the game without extra OT minutes.

It was a special night in the Thunderdome, as the 27 points for Edelman are tied for her career-high, with this being her sixth double-double in the last seven games. Toler had 10 dimes, which is also tied for her career-high in assists, and her second straight home game dishing out double digits assists. Sahar ended the game with a season-high 21 points, and just two points away from her career-high.

UCSB shot at 46.3 percent on 25-for-54 shooting, while UCR scored at a slightly higher 49.1 percent on 27-for-55 shooting. Both teams were aggressive offensively, the home team just showing more assertiveness late down the stretch.

The Gauchos are geared to play their last game of the regular season on the road against Hawai’i on Thursday, Mar. 1 at 9:00 p.m.

Correction on the play that led to the final free throws, Porter inbounded the pass to senior guard Drea Toler who was fouled and forced to leave the game after being injured on the play.