A female UC Santa Barbara student was wounded in a stabbing after a party in Isla Vista on Friday night. 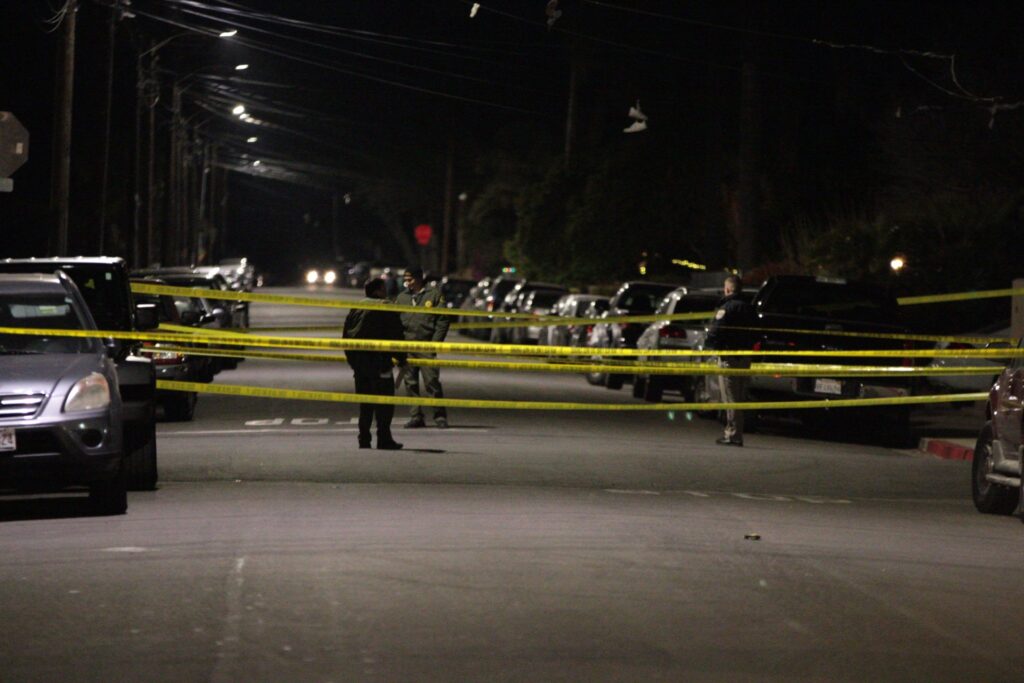 The incident occurred around 11 p.m. at a residence on the 6700 block of Del Playa Drive. The victim was stabbed in the pelvis, Santa Barbara Sheriff’s Office Sgt. Brad Welch said in a release.

The suspect is described as a college-aged black male adult with dreadlocks and wearing a black sweatshirt, Welch said. Law enforcement has not been able to locate the suspect, who fled the area before first responders arrived.

The 24-year-old victim was provided care on the scene and then transported to the hospital.

Witnesses described an altercation between the suspect and the victim, but “their relationship is unknown at this time,” Welch said.

Authorities at the scene blocked off the intersection of Del Playa and Camino Del Sur with caution tape following the incident.

We need to ban knives

We need to ban SBCC students.

How about the ucsb student who hit a pastor over 30 times in the face (may 8th 2016)? Or the one who was on a crime Spree a few months back(November 3rd 2017? Your university education doesn’t man you are not ignorant. Just search the news and you will find enough articles about ucsb students getting arrested for various crimes that you will buy a glass stomach.
That way you can keep you head shoved deep in your ass but at least be able to see.

OK let’s just start in September. SBCC football player arrested for injuring an IV foot patrol officer, SBCC student hospitalized after attempted back flip off del playa balcony, 2 SBCC students arrested for attempted burglary, of course this stabbing and some other stuff but I don’t have time right now. Obviously not all UCSB students are good people and not all SBCC students are bad people but, overall, SBCC students cause most of the trouble in IV. However, the main point here is that SBCC, the institution, is enrolling far too many students from outside the district it is supposed… Read more »

Do you mean that only people who can afford a UC tuition should be able to go to school in a place of their choosing? Do you not know that most community colleges in the county have an open door admissions policy?

I hope she makes a full recovery. The person who did this is a SBCC student from Wisconsin. When is UCSB going to realize that SBCC is ruining the university. UCSB students need to do something about this or SBCC will continue to bring murderers, stabbers, and other people who cause problems in IV. Why are these people moving to IV to attend a community college? This should be the last straw, something has to change because UCSB students shouldn’t have to deal with this.

The fact of the matter is sbcc continues to allow all these out of state and out of country students to attend the school because they get more $$$ from them. Santa Barbara is AT CAPACITY and we are sick and tired of this school steamrolling us by bringing all these students here, many of whom are NOT serious about school and come here to party. Enough is enough!

Built a since you want to be separatist, education is for everyone

Sure education is for everybody but everybody doesn’t have to cram into a single community college in Santa Barbara.

I can’t tell if this a real opinion or trolling

Don’t omit the fact, the 2014 shooter, Elliot Rodger WAS AN SBCC STUDENT! Learn & research your history you fucking ignorant asshat!

Next time pull your head out of the sand before you comment. Just a suggestion

Elliot Rodger was an out of district SBCC student living in IV.

Was that the same guy who was arrested last yr for burglary?

No, that piece of shit, he was on the SBCC football team, this assclown is a soccer player. Not that it makes a difference in terms of sport, the common ground is… SBCC.

If you refer to people as you people than you need not be commenting as you have no respect for others .

I wish the victim a speedy recovery. Much of the negative press and crime related issues coming out of IV can be attributed to the actions of SBCC students yet it’s the UCSB reputation that becomes tarnished. SBCC has a 100% acceptance rate and they entice “students” from all over the state and country who end up moving to IV. Obviously not all SBCC students are bad people but there are literally thousands of SBCC students who go to SBCC just so they can live and party in IV and pretend they are UCSB students. It’s just a matter of… Read more »

If I was a UCSB student I would be outraged. Why is SBCC allowed to keep recruiting criminals to come live in IV with UCSB students? If something doesn’t change UCSB students will continue to get murdered (Elliot Rodger), stabbed (this guy) and have their reputation tarnished by the countless criminals SBCC brings into IV.

He looks like the guy caught on camera breaking into an apartment a few weeks back. This was a mugging not an argument. Why is the victim being described as a participant?
If you are over 21 get your CCW Train to protect yourself.

Our lovely liberal county does not issue ccw permits.

If you have no idea what it was be quiet

Attention UCSB students! Let’s all move to the Mesa next to SBCC so we can party with the SBCC students, use the SBCC gym, study at the SBCC library and occasionally commit major crimes against SBCC students. Sounds crazy but this is exactly what SBCC is doing to UCSB. What makes it even crazier is the fact that SBCC is supposed to be a COMMUNITY college.

Count me in dude!

Hmm Is anyone keeping a tally on rapes? Sbcc vs ucsb? I hear the frats have an advantage;)

This is not about keeping score, this is about realizing that SBCC has grown much too large for a community college. A community college in a small city like Santa Barbara should not have 20,000 students.

of which only 7922 are in district students.

Also, once a student moves to SB or IV and gets a new address SBCC then classifies them as in district students.

it just gets worse and worse. sbcc is so manipulative

It’s way less than 4000. Even if every graduating senior from all the local high schools went to SBCC it would still be less than 4000