“Black Panther” follows some recent creative trends on Marvel’s part while forging ahead with new ideas. Like “Spider-Man: Homecoming,” the movie is a solo film about a pre-established hero that doesn’t dwell on his origin story. Like “Thor: Ragnarok,” it is directed by someone who has experienced considerable acclaim as an independent filmmaker.

In addition, by hiring a person of color to write and direct a superhero film about people of color, the film gains cultural insight and credibility. Ryan Coogler’s  “Black Panther” is a film rooted in real-life issues that tells one of Marvel’s more grounded stories while being set in an unabashedly sci-fi setting.

Taking place right after the events of “Captain America: Civil War,” “Black Panther” follows the titular hero as he returns to his high-tech hermit kingdom, Wakanda, to take his rightful place as king. Unbeknownst to Prince T’Challa (Chadwick Boseman), however, his Oakland-raised cousin Erik “Killmonger” Stevens (played by frequent Coogler collaborator Michael B. Jordan) plots to return to the land of his father and usurp the throne for the sake of an end goal that he sees as racial justice.

Much has already been said of Killmonger and how he breaks free of the Marvel villain mold. Barring Tom Hiddleston’s Loki, Marvel’s villains are either shallow characters or are downright forgettable. Ronan from “Guardians of the Galaxy” just wanted revenge. Killian (Guy Pearce in “Iron Man 3”) also just wanted revenge. As for Malekith, well, not only did I have to look up his name, but I also cannot remember a single thing he said or did in “Thor: The Dark World.”

And yes, when you boil it down, Killmonger’s objective is also just revenge. However, it’s revenge rooted in social circumstance. Growing up as a black child in Oakland, Calif. probably isn’t the most pleasant experience, especially after becoming an orphan. Killmonger did not grow up in an affluent, high-tech African nation; he had to struggle in one of America’s most crime-ridden cities and experience prejudice. And I love the fact that the movie doesn’t just say this outright; it’s something that’s heavily implicit. Killmonger’s pain leads him to become the very thing he hates, which makes him a fascinating, complex villain.

Also, Jordan can now safely say that he has escaped the stain on his filmography that is “Fantastic Four.”

As for Killmonger’s partner Ulysses Klaue, a villain returning from “Age of Ultron,” Andy Serkis seems like he’s having a helluva time playing such a hammy role without having to wear a mo-cap suit. But in the grand scheme of things, Klaue is a throwaway villain and the film spares no time in acknowledging this.

Most of the rest of the cast could not be considered throwaways, though. Boseman is back in top form as the Black Panther, King of Wakanda, superhero and sovereign ruler. He’s personable and fights for his country, but the figurative crown doesn’t require him to have a stick up his ass. His sister Shuri (Letitia Wright)  plays off of him well with her mischievous demeanor and intelligence. She is the film’s heart, as well as its greatest source of comedy (and nifty gadgets). 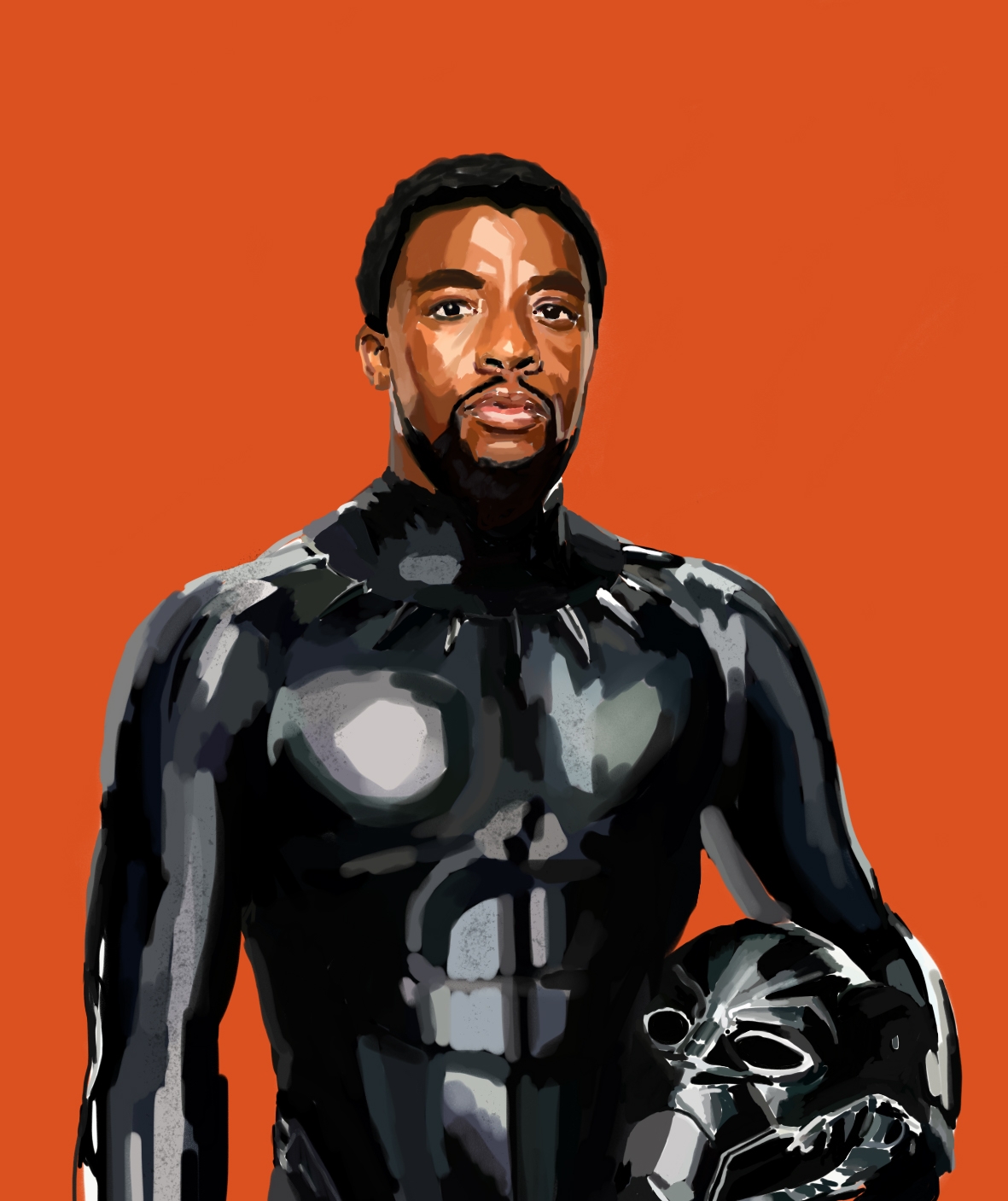 Danai Gurira of “Walking Dead” fame trades her katana in for a spear and her survival gear for an elaborate, awesome-looking red combat suit as the head of Wakanda’s royal guard. While she kicks the most ass, she’s also part of some ham-fisted drama between herself and her lover W’Kabi, played by Daniel Kaluuya (We know they’re lovers because she tells us they are). After playing such an interesting protagonist in “Get Out,” it’s a shame to see Kaluuya having to portray such a thinly written character who changes allegiances on a dime. Victim to exposition and some truly goofy scenes with CGI rhinos, he is the film’s greatest writing casualty, mostly existing to serve the plot rather than himself.

Speaking of the CGI, “Black Panther” is heavily reliant on it, for both good and ill. It would be pretty much impossible to depict Wakanda in its purple-tinged sci-fi tech glory otherwise, but then you have the final battle with the aforementioned CGI rhinos and a literal catfight between men in mo-cap suits. At that point it looks less like a battle and more like a violent Robert Zemeckis flick. There’s just something about CGI — when used to depict things you could otherwise depict practically — that kills immersion. You can’t have Black Panther fighting Killmonger on a mag-lev train track, of course, but can’t they at least be in actual suits? It’s the movie’s climax; it deserves the feeling of authenticity that had been fairly consistent up until that point.

Then again, a fight is only as good as the story behind it. It can be flashy, it can look badass, but if you don’t give a shit what’s happening with the characters then the fight is just that. “Black Panther,” besides being about a king fighting for what’s his, also delves into themes of responsibility. Wakanda has the technology and resources to enhance the lives of millions. But should it? T’Challa grapples with this question throughout the film, which drives his decisions and his interactions with his loved ones.

Killmonger, however, thinks Wakanda ought to arm people of color to rise up against their oppressors. The film is very much interested in observing how people utilize power, both of the fictional superhuman variety and the political variant. In a world where we have politicians making increasingly stupid decisions all across the bloody planet, it’s certainly not something to quickly dismiss.

So we have a smart Marvel movie that’s not set in New York for once and has an awesome cast to play fascinating characters, a gorgeously rendered setting and an engrossing story that develops its characters well and leaves me excited to see them in a couple more months when “Infinity War” drops.

The only reason I could find not to see this movie is having to sit through several trailers for what look like progressively shittier movies. That, or you’re an astounding racist. In which case, sucks to be you.

Alex Wehrung apologizes in advance if he offends anyone from Oakland.