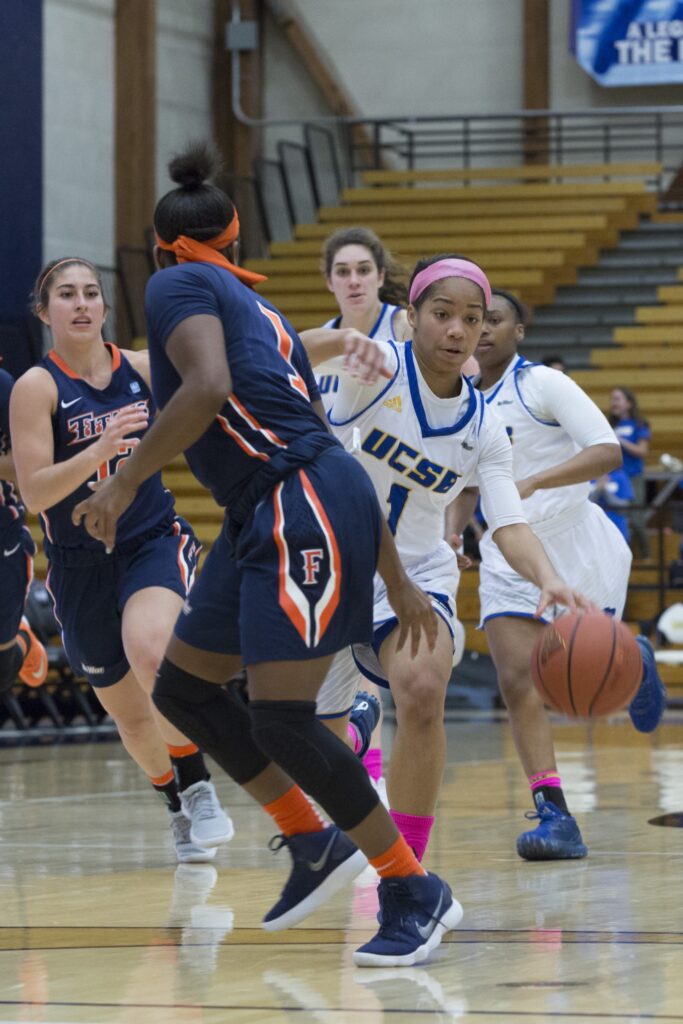 The Blue-Green Rivalry ignites once again as the Gauchos’ women’s basketball team is set to duel the Cal Poly Mustangs tomorrow in San Luis Obispo.

Santa Barbara is hot coming off a big 82-55 victory against UC Irvine. In that game, redshirt senior forward Drew Edelman was back on her double-double grind for UCSB, knocking down 12 points and grabbing 15 rebounds. This was her fourth double-double in the last five games.

Her awesome performance last week against UCI and CSUF did not go unnoticed as Edelman earned her second career Big West Player of the Week honors on Monday. She averaged 16 points and 11.5 rebounds in her two games last week.

However, Edelman wasn’t alone in achieving a double-double against UCI, as redshirt senior Drea Toler also managed to earn a double-double. Dishing out 10 dimes and scoring a commanding 10 points, Toler was on fire.

Following the win, the Gauchos are currently 11-14 overall and 8-5 in the Big West. They are also winners of three straight games. The outcome of the game places UCSB one game closer to second-seeded UC Irvine in the standings.

As it stands now, Santa Barbara is in third place in the Big West, tied with Cal Poly, their next opponent.

This upcoming game has serious conference contentions, as it gives either team the opportunity to be the lone third seed and to inch closer to the two-seed spot.

The Mustangs will be hosting Santa Barbara as they come off a loss from Cal State Northridge, where they fell 86-66, but not from a lack of effort.

There are some dangerous players on the Mustangs, and UCSB will need to be on high alert for their balanced attack.

Senior guard Dynn Leaupepe scored a monster 29 points in the last game for Cal Poly and averages 25.5 points per game during conference play on 46 percent shooting.

Her offensive approach is a potent one and is something the Gauchos will have to guard against if they want to contain their opponent.

Another player to watch out for is senior guard Lynn Leaupepe. Grabbing seven rebounds in the last game versus Cal State Northridge, L. Leaupepe has over 30 offensive rebounds and 50 defensive rebounds in recent conference games, averaging six rebounds per game.

Boxing out and grabbing boards is going to have a major impact on Cal Poly’s game versus USCB, so it will be interesting to see how the Gauchos match Cal Poly’s intensity under the basket. In their last game, Cal Poly shot 41.2 percent from the field on 28-for-68 shooting.

Their offense fell flat in the third quarter, which is where CSUN began to run away. If the Mustangs keep their foot on the gas with their normal scoring attack, they will be a tough opponent to beat.

Look out for the bench play on both teams. Santa Barbara usually has a superior bench in comparison to their opponents, their reserves often making worthy contributions to the game.

Not to be dismissed, though, is the bench play of Cal Poly. The home team also has a great bench, which was evident in their last bout, where the reserves put 37 points on the board.

Both benches match up nicely, and their head-to-head battle will be a big influence on the outcome of the game. This will be a Blue-Green Rivalry game to remember, as both teams have serious consquences on the line.

Santa Barbara will take on Cal Poly at 7 p.m. on Wednesday, Feb. 21, at the Robert A. Mott Athletics Center.