The Daily Nexus
Science & Tech
UCSB Selected to Host Its First SASE Conference
February 15, 2018 at 12:39 am by Kevin Flores

Three years after its founding in the fall of 2015, the UCSB Society of Asian Scientists and Engineers (SASE) chapter was selected to host the organization’s West Regional Conference for the first time. Bringing together students from around the region as well as professionals, recruiters and representatives from various companies and schools, the conference strives to provide its members with opportunities to network and to grow within their Asian American identity.

The organization’s selection of UC Santa Barbara to host the 2018 conference marks the first time the chapter has been selected, a hallmark event in its brief but impactful history, but also a chance to display the various resources and amenities the UCSB campus has to offer.

SASE is an organization whose mission is to bolster the Asian and Asian American identity in the S.T.E.M. fields, whether that be on a university campus or in the workplace. Additionally, its members strive to both celebrate and promote diversity in all forms. Boasting a roster of more than 50 active members, the UCSB chapter has effectively solidified its place among other universities’ chapters.

The conference serves as a place for young Asian and Asian American scientists and engineers to explore professional and networking opportunities outside of academia. For many members, the conference marks their first foray into the perhaps daunting world of industry.

“I feel like this is my first step into the professional world. I’d never attended anything where I had to wear a suit or dress formally,” second-year biology major Alicia Leung said. “I wanted to see how people presented themselves in these situations, especially people around my age.”

For a large majority of the members, the club provides a comfortable intersectionality between their major of choice and their cultural background. 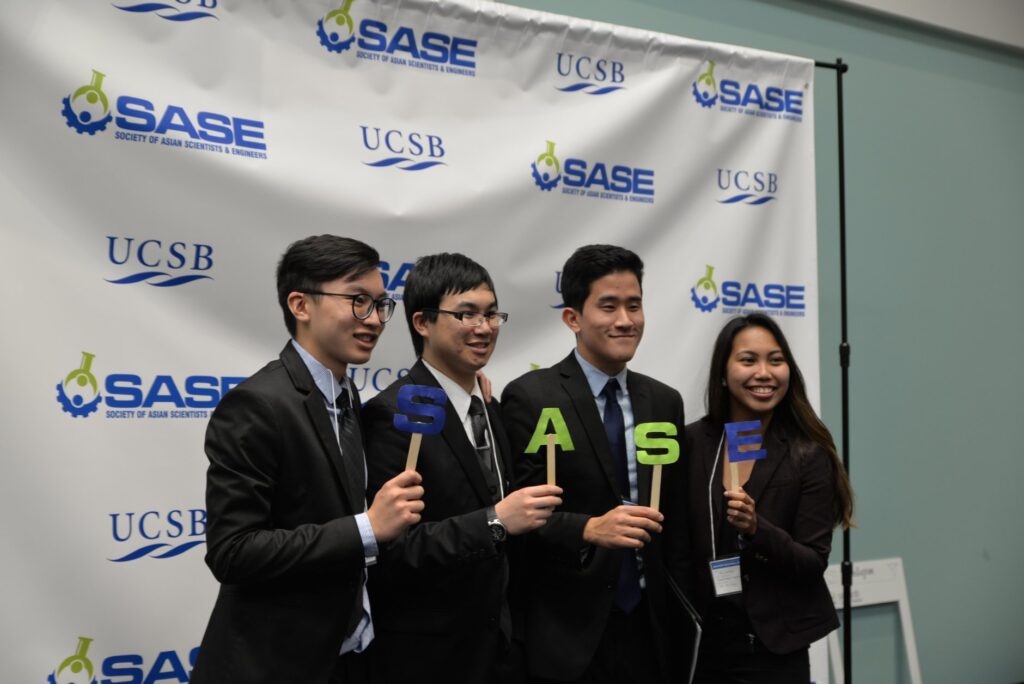 SASE is an organization whose mission is to bolster the Asian and Asian American identity in the S.T.E.M. fields, whether that be on a university campus or in the workplace. Additionally, its members strive to both celebrate and promote diversity in all forms. With over 50 active members, the UCSB chapter has solidified its place. / Courtesy of SASE

“One of the main things I wanted to do when I came to this school was to find some kind of extracurricular activity that related to my culture. But I also wanted to find an academic club,” Leung said. “When I heard about SASE, I thought it was a perfect fit. A good mesh between the academic and the social aspect.”

The theme for this year’s conference was “Empower You to Act,” wherein conference goers were encouraged to break stereotypes and expectations commonly placed on Asians and Asian Americans. Through a number of different workshops and keynote speakers, the club’s leadership aimed to motivate its members to take initiative in finding professional and academic opportunities.

“There’s a stereotype of Asian Americans as a model minority and SASE aims to break that,” Shreyas Radhakrishna, a fourth-year computer science major and one of the co-presidents of the UCSB SASE chapter, said. “One of our goals is to help our members be more outspoken, to be able to stand up for themselves, to step up where it’s necessary and to be able to step out of their comfort zone and act on opportunities they may be tempted to pass by.”

Moreover, both the club and the conference provide an opportunity for students to comfortably navigate the professional sphere, while immersed in an environment that is keen on embracing their cultural identities.

“I feel like being around like-minded, very ambitious individuals is very inspiring. Surrounding myself with professional, ambitious people has helped me become more ambitious,” Leung said. “[SASE] has helped me be more in touch with my roots. Being around other [Asian Americans], I never have to suppress anything I may have been conscious about before; I’m around people who practically grew up in the same culture.”

For its younger members, the conference provides a chance to experience first-hand the work that goes into putting on such a large event.

“It’s nice to see how a conference like this is set up,” Alex Hattori, first-year chemical engineering major, said. “I’ve never done anything like this, where lots of companies come and you can meet a lot of students.”

“The club has really helped me,” Karen Caballero-Austria, first-year physics major, said. “Academically, for example, they bring a lot of people from certain research companies to talk about how to get internships, explore research opportunities and go over resumes. Learning about the companies and what they do and seeing what I can do to improve before the next conference.”

As these young students only tentatively begin to get a feel for what the world is like post-graduation, the conference provides an incomparable learning experience. With so many large companies like the NASA Jet Propulsion Laboratory and Northrop Grumman in attendance, there is a high chance that they might just find something they are truly interested in pursuing.

“For a freshman who’s not really used to taking initiative, it was my first time getting involved in these sorts of [professional] events, watching how people interacted,” first-year biology major Se Hyeon Park said. “I wanted more exposure to these kinds of events, to learn about these companies and what they do.”

Overall, the SASE conference and the UCSB SASE chapter provide an unrivaled resource for students looking to embrace the intersectionality of being an Asian American in the S.T.E.M. fields. By providing invaluable networking and research opportunities, they aim to prepare their members for success in the world outside of university.