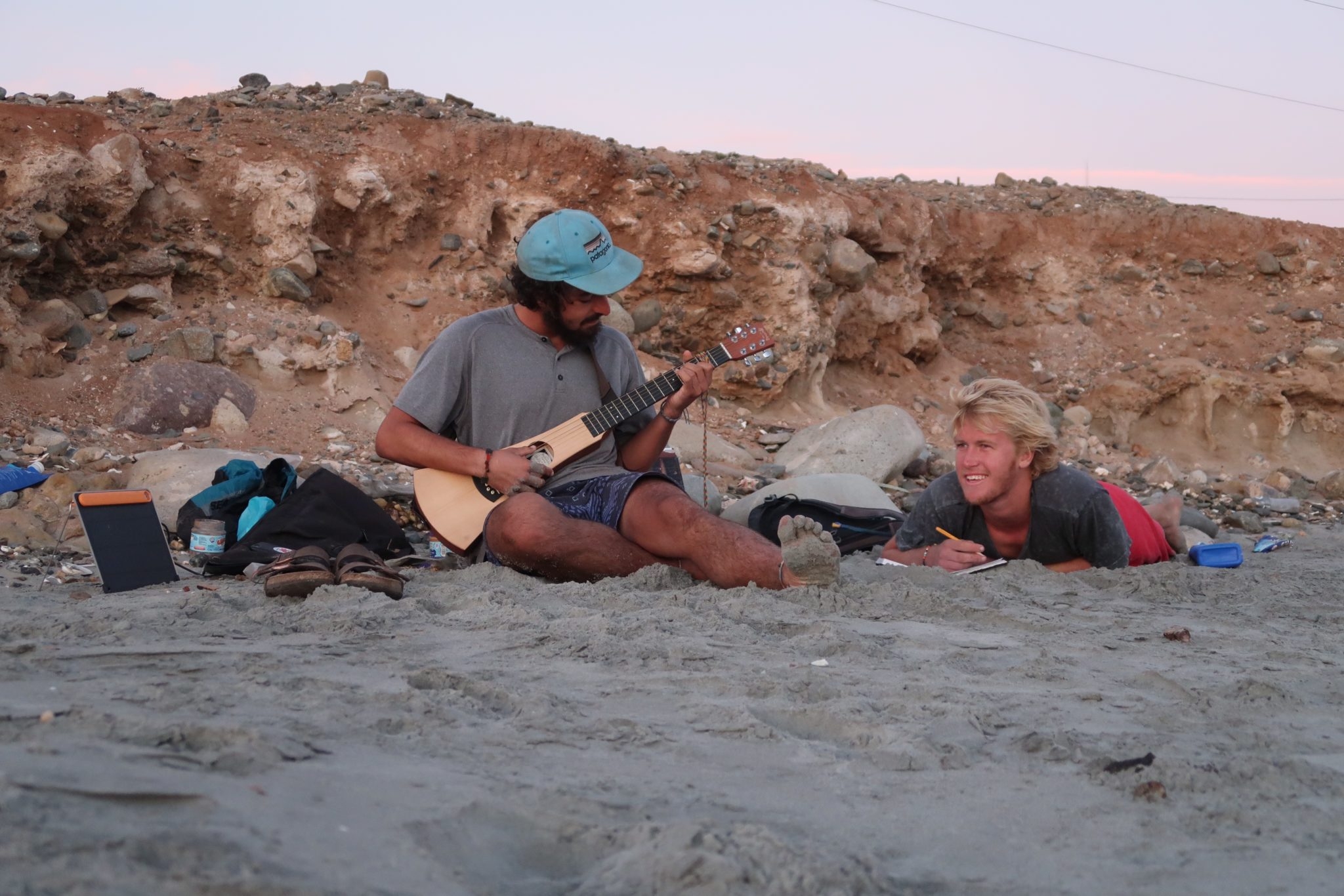 Connell and Lee enjoyed some rest along the way, this time on a beach in Baja, California, surrounded by their travel mementos. Courtesy of Daniel Connell

On Monday night, UC Santa Barbara alumni Daniel Connell and Quincy Lee settled in for a night of sleep at a fire station in Managua, Nicaragua, after an eight-hour bicycle ride through the Latin country.

“We had a pretty crazy day,” Connell recounted with a laugh heard through the phone. “It was just hectic with a lot of wind and a lot of sun. We had to ride almost 100 miles, and I ended up getting a flat tire, but we made it to the fire station, which was our goal.”

Connell and Lee have been on the road biking since Oct. 20, 2017. After graduating from UCSB in the spring of 2017, the two saved up money from summer jobs and decided to embark on a trip from Isla Vista to Colombia, opting for a different mode of transportation than the average traveler.

“I thought, ‘What better way than to bike there?’” Connell said. “And then I thought, ‘What friend do I have that’s crazy enough to take on an adventure like that as well?’ So I gave Quincy a call.”

Lee considered the offer for about 10 seconds before saying, “Yup, I’m down.”

They started biking from the 6800 block of Del Playa Drive, where Connell and Lee were met by friends who biked with them until they reached the edge of campus. They then rode through I.V. and onto campus, past the library and under Henley Gate. 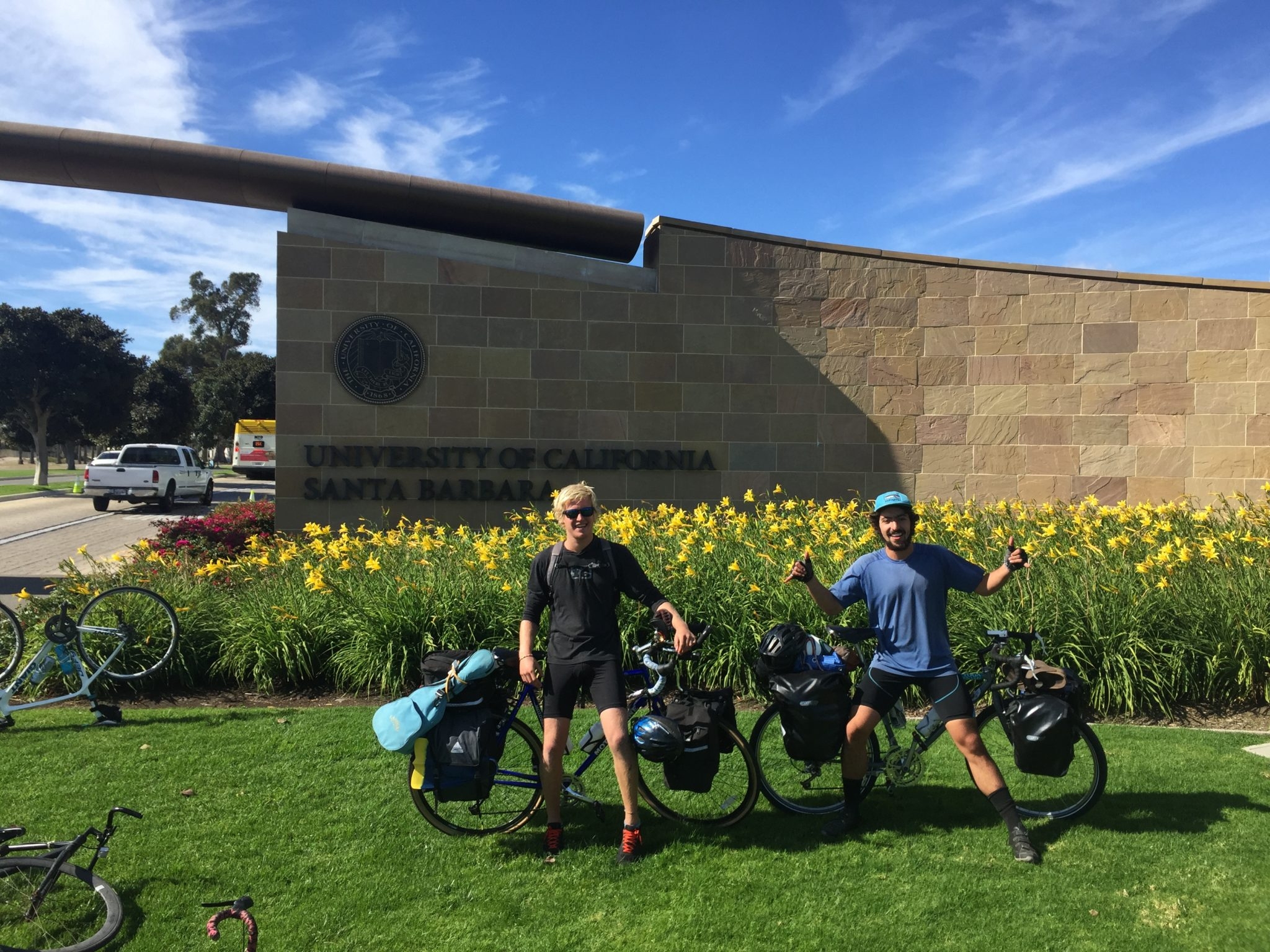 Connell and Lee began their journey in Isla Vista, biking through town and campus before riding under Henley Gate. They made it to Malibu on their first day of biking. Courtesy of Daniel Connell

“Our first day, we rode out of I.V. through Santa Barbara. We ended up in Malibu that day, and up until that point, that was the longest bike ride of my life,” Lee said, adding that since then, he’s easily doubled the time he spends on his bike.

“It was pretty significant because the last four years of our life were at UCSB,” Connell reflected. “That was our home, and it was a significant change to actually leave from that home to start this new segment of our lives.”

After reaching the U.S. border, they spent 80 days exploring Mexico until they reached Belize. From there, they traveled through Guatemala, Honduras and El Salvador. Monday night’s rest in Nicaragua was another stop on their journey as they prepare to bike through Costa Rica and Panama until reaching Colombia.

But the two will remind you that it’s not really about the destination anymore, after having interacted with folks in numerous cities on their journey. They say they have experienced generosity, hospitality and love as they have been welcomed into the homes of strangers.

“I think when we arrive in Colombia, we’re going to have a list of about 250 people we’ll need to call, like ‘We made it!’” Lee laughed. “Not even people from back home, but people we met along the way.”

Connell says after 100 days on the road, they have not yet paid for a place to sleep, instead relying on the kindness of locals ― including families, firemen and policemen ― who welcome them into their homes and workspaces. Other nights, they have camped in parks, basketball courts, at bus stops or on the side of the road.

They even strung a hammock between two broken semi-trucks one night.

“And if it wasn’t the best rest I ever had,” Lee recalled.

The bikers will admit that the most challenging part of the journey has been the biking itself; pedaling up rocky mountains for hours on end in extreme heat with bicycles that weigh about 140 pounds can take a toll.

Both agreed the exercise has been as much a mental exertion as a physical one. Often, they ride on freeways with trucks whizzing past them, with a clamor of honking horns in the background.

Lee once faced off with a bull in the middle of the road, remembering that its horn came within inches of his handlebars.

He describes biking in these situations as a “mental game” that’s better than “any meditation [he’s] experienced ever before.”

Connell said one of the best parts of the trip has been “breaking that social stigma” that people have about countries that are often portrayed in the media as dangerous. 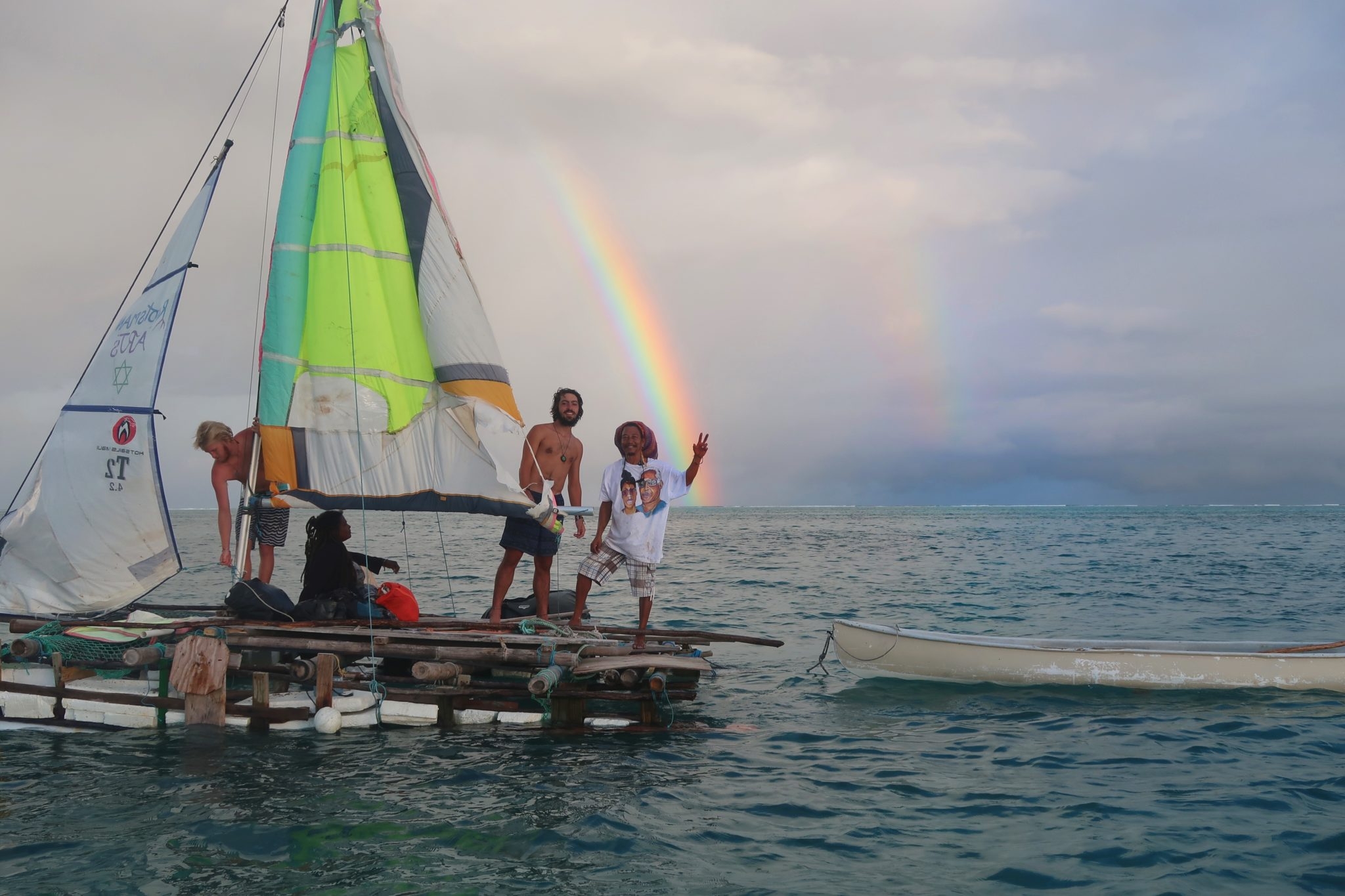 The bikers stayed in Belize for two weeks after a local man invited them to stay with him and his family in their home. Courtesy of Daniel Connell

Connell and Lee said they planned to go to an island in Belize for one day and ended up staying for two weeks after a man invited them to stay with him and his family.

“It was something special because he lived on a separate island, and his daily commute from one island to the next was via his homemade sailboat that he made purely out of materials that he found on the beach where he lives,” Connell said.

They both agreed that Honduras has been their favorite country to visit so far, but only after some hesitation.

“That’s a hard question!” they exclaimed in unison. Honduras is listed as one of the most dangerous countries in the world, but the bikers agreed that they met some of the “most incredible people” in the country.

“People are aware that their country is famous for being violent, and it’s really unfair because it’s just not true. Everywhere in the world there’s violence,” Connell said. 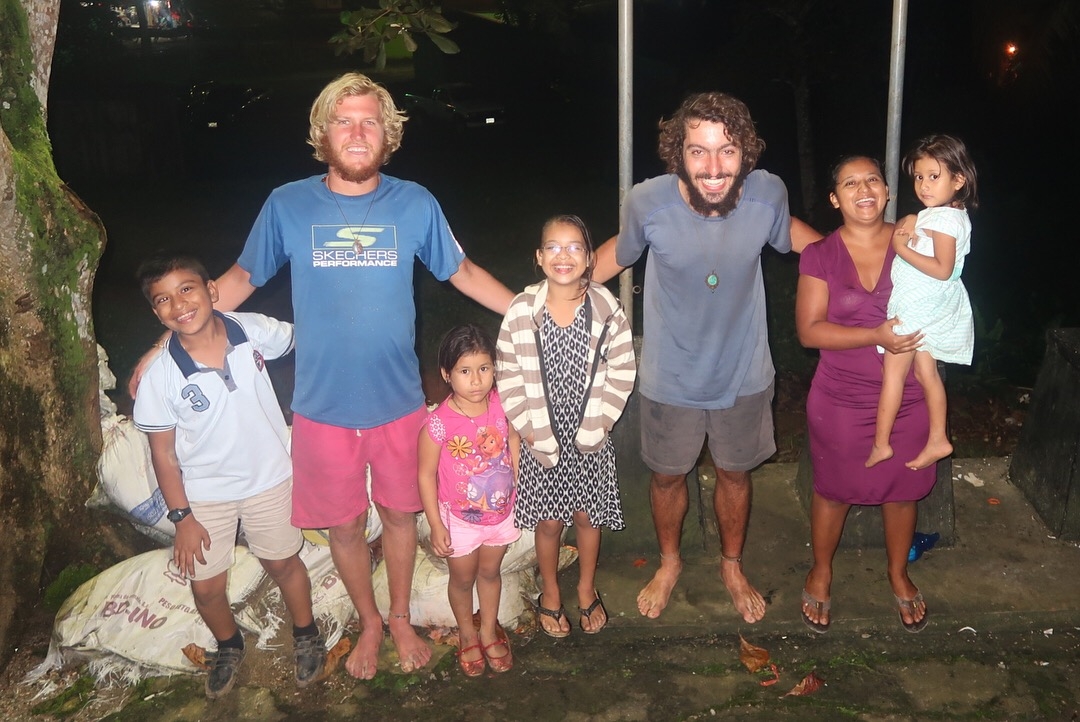 Connell and Lee agree that they have met the most hospitable, generous and loving people while traveling, including this family in Guatemala. Courtesy of Daniel Connell

As much as this trip has been a wild adventure and learning opportunity for Connell and Lee ― both now fluent in Spanish ― they have also been working toward another goal: raising $5,000 for the World Bicycle Fund.

The organization brings bikes to impoverished communities around the world that lack proper modes of transportation. Connell and Lee’s goal of $5,000 would be enough money to donate 30 bikes to people around the world. They have currently raised $3,000.

“We’re using this tool [bicycle] to change our lives… and to be able to help people use the same tool to change their lives and their community is really special,” Connell said.

They are raising money through the organization’s website and their personal blog, where they keep friends and family updated on their whereabouts.

Connell and Lee have two more months of biking ahead of them until they reach Colombia. Despite the long journey they’ve already had, they aren’t tired — anyone could hear it through the excitement in their voices.

In fact, the travel mementos they have packed keeps growing, adding more weight to their bags, although they would say it’s worth it.

They currently are carrying a guitar, ukulele, multiple books, fins to help them swim, cooking supplies and even a backgammon set, Connell said.

“We had a backgammon set,” Lee reminded his friend.

“Okay, we had a backgammon set,” Connell conceded. “We recently lost that and it’s quite heartbreaking.”

Yet it doesn’t seem to be the objects that have made this trip so worthwhile for Connell and Lee. Instead, it’s been the knowledge gained along the way, the change in their worldview and the strengthening of their own friendship.

“After four years at UCSB, me and Quince, to put it in funny terms, were homies,” Connell chuckled. “We would hang out, but we never actually traveled together, and to go from that to sleeping within a foot of each other ― we’re like a married couple.”

Perhaps at the end of the day, it comes down to a love of biking and a friendship that started at UCSB. One thing is for sure: Connell and Lee don’t seem to be braking anytime soon ― they are already planning their next trip, maybe biking through the Middle East, including Iraq and Iran, or from Colombia to Patagonia at “the end of the world.”

They have a few rides ahead of them to figure it out.