The Daily Nexus
Sports Blogs
No … The Dallas Cowboys Are Not “America’s Team”
February 15, 2018 at 5:10 am by Kendra Jackson 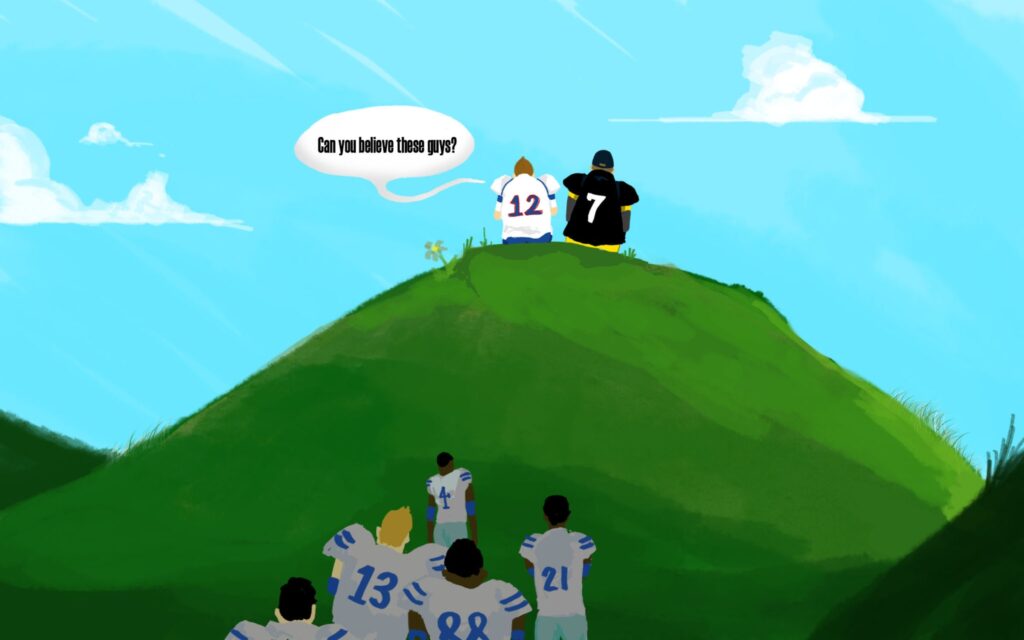 We all know nostalgia. As a ’90s baby, I get it. I remember everything from the bulky SEGA Genesis cartridges to when PlayStation was the lone wolf and Xbox wasn’t even invented yet.

But no matter how great those memories make me feel, the realization is … this isn’t the ’90s anymore.

The past belongs in the past, and it’s time we all stop living in the past and come to terms with reality – The Dallas Cowboys are not America’s Team.

Calling the Dallas Cowboys America’s Team is an insult that America just does not deserve.

Sports is all about, “What have you done for me lately?” And let’s be honest: the Cowboys haven’t done anything.

I could sit here and try to convince you that the Pittsburgh Steelers should be America’s Team because they have the most Super Bowl victories (for now), or I could tell you that Captain America himself, Tom Brady, and his dynasty-driven Patriots are the true heroes of America, but I won’t.

Instead, let’s use logic to distinguish why the Cowboys not only aren’t America’s Team but in fact, they’re a team not many in America even like.

First off, it is imperative that an avid sports fan knows exactly where the term “America’s Team” even comes from.

Legendary sportscaster John Facenda coined the term when he referred to the Dallas Cowboys as “America’s Team” during the highlight reel of their 1978 season.

You don’t have to do the math to know that’s over four decades ago.

Next, let’s talk about what really matters: Super Bowl victories.

How are the Cowboys in the hardware department?

The last Super Bowl the Dallas Cowboys won was in 1996. Dubbing them America’s Team when they haven’t had a championship in over 20 years is a pretty big loss for America.

Though it can’t be overlooked that the Cowboys do have five Super Bowl wins from years past, most of those wins were before some of us were even born. Sure, that doesn’t take away the fact that those championships are accomplishments that were very real, but, again, the name they still carry is highly outdated.

In retrospect, the Cleveland Browns were dominant in the 1950s.

Does that mean they still get brownie points for what they used to be? Absolutely not. Had football fans been calling them America’s Team back then, up until today, people would really be rethinking that now.

Still not convinced the Cowboys aren’t the team they once were?

The Jacksonville Jaguars have more postseason wins in the past 20 years than the Dallas Cowboys do.

Up until their most recent breakout season and their AFC Championship game loss to the New England Patriots, the Jacksonville Jaguars hadn’t had a winning season in ten years and hadn’t won more than five games in a year since 2010. And yet they still have more playoff wins than the Cowboys do.

Sure, Cowboys owner Jerry Jones would like to convince you that his flashy stadium and gorgeous cheerleaders establish them as America’s Team, but no.

It’s ironic if you think about it: Jerry Jones has got billions and billions of dollars, but sadly, he still can’t seem to buy another Super Bowl win.

And for all of you folks who miss Tony Romo and what he (debatably) brought to the table, I’ve got something for you: Blake Bortles, who just became a starting quarterback in the 2017-2018 season, has as many playoff wins as your old beloved Romo who played for 14 seasons.

Don’t know who Blake Bortles is? My point exactly.

In the words of Jay-Z: “Men lie, women lie, but numbers don’t.” And the numbers for the Cowboys, or lack thereof, speak volumes.

So the next time you find yourself watching yet another unbearable Thanksgiving showdown between the Dallas Cowboys and some other team who is probably more deserving of a home game, I challenge you: Don’t call the Cowboys America’s Team.

Instead, just change the channel. They probably won’t be in the Super Bowl anyway.

that’s their nickname…America’s team, no other team has that moniker.

Look at rating and sales, that’s all this need to prove they are America’s Team!

This dude is an idiot! COWBOYS will forever be “America’s Team.”