The Daily Nexus
Tennis
‘Chos Prepare for Back-to-Back Home Matches
February 15, 2018 at 5:07 am by Brandon Victor 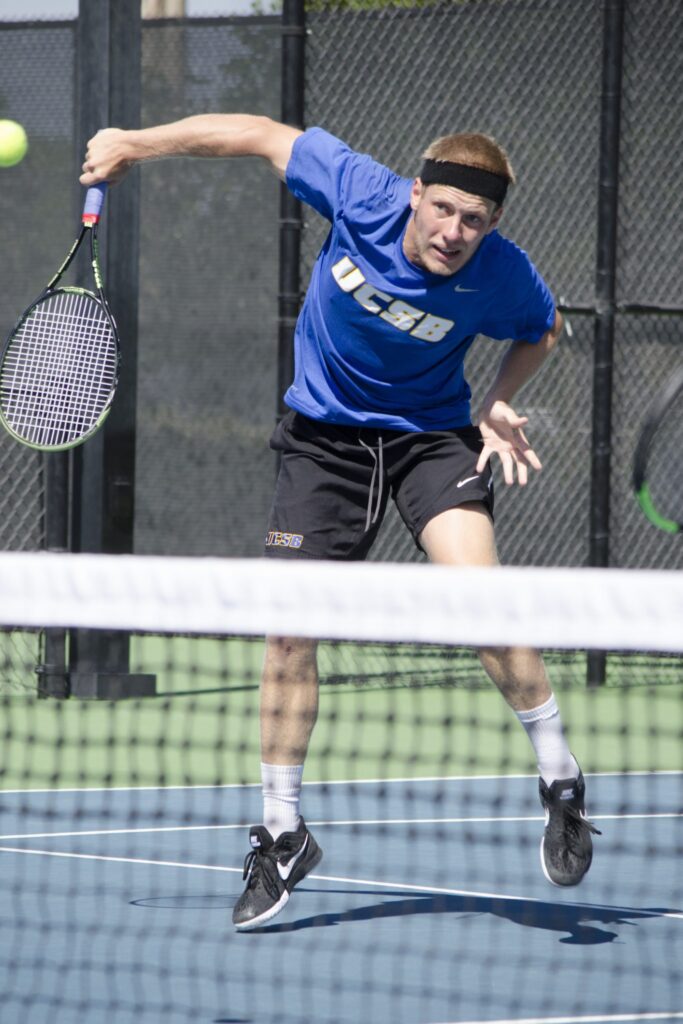 The UCSB men’s tennis team will look to bounce back from a tough loss against USD over the past weekend when the team comes home to face off against both the University of San Francisco and University of Pacific this weekend.

UCSB will look for bounce back performances from its top players this week. Last week, Santa Barbara top two seeds – junior Nicolas Moreno De Alboran and senior Simon Freund – dropped their sets. While the team showed grit and resilience in almost coming all the way back from a 3-0 deficit, including a standout individual performance from freshman Joseph Rotheram, it will need to start the match off much stronger if it truly hopes to capitalize on the momentum the home crowd brings.

On Saturday, the Gauchos will take on a Dons team that has started to gather its footing on the court as of late. While it only has a 2-3 record, USF played No.5 USC competitively last week.

The Dons had a chance to win the match before they dropped two tiebreakers in singles. Nonetheless, USF will pose a challenge to a UCSB team that will need to stay motivated following its tough loss.

While the Dons have just seven players on their roster, all six of their starters played on last year’s team that finished with a 10-14 record. Senior Johan Joenhagen, a transfer from the University of Utah, leads the charge for USF. He finished last season with an 18-14 record, and won his doubles match against USC alongside sophomore Mert Zincirli, who also boasted a winning record in singles matches last season.

After getting swept last week in doubles, UCSB will need to improve upon its play if it hopes to take the opening point, as the Dons have only lost the doubles point once this season.

The Gauchos will also benefit from having a week of rest; last week, the team was plagued with the flu, which held freshman Victor Krustev out of the match.

Following their match against USF, the Gauchos will take on Pacific on Sunday. Pacific has limped its way to a 1-6 record, but hasn’t played at full strength yet all season due to a myriad of injuries and illnesses. In fact, in the match against Utah (a 7-0 loss), the team only had four players who were available.

That being said, the team still has plenty of talent, as evidenced by their 13-14 record last season, and only needs one strong performance to get back on their feet this season. The Tigers are led by standout freshman Mikayel Khachatryan, who holds a professional ATP rating in doubles. After sitting out for a year due to NCAA rules, he has quickly catapulted to the No. 1 spot for the Tigers. Much like USF, Pacific has won the majority of its points this season through doubles, despite their struggles in singles. In addition, sophomore Akram El Sallaly was named as an honorable mention to the All-WCC doubles team, and played in 24 of 25 matches for Pacific last year.

“Hopefully, we’ll have another great crowd,” Head Coach Marty Davis said. “Having fans there keeps us from letting down, and both USF and Pacific are dangerous.  These are both good teams and we’ll need to play well to win.”