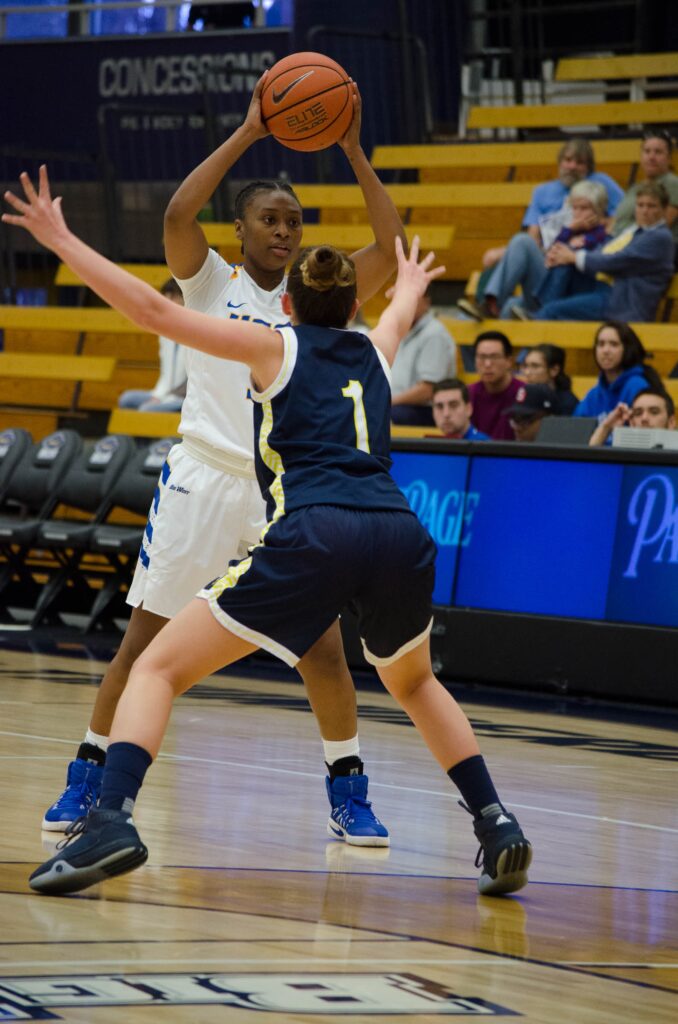 The UCSB women’s basketball team is due to face off against the Cal State Fullerton Titans tonight at home in the Thunderdome.

These two teams are very familiar with each other as of late, since they just matched up against each other last Saturday, Feb. 10 on CSUF’s home court.

In their last bout, the Gauchos defeated the Titans in a low-scoring battle, 59-52.

UCSB mounted an 18-point lead at the start of the second half, leading the home team 36-18, which would be Santa Barbara’s biggest advantage of the game.

The visitors continued to dominate, riding a 47-38 lead going into the fourth quarter of the game – but nearly faltered late, letting their opponents gain headway. The game, though it was close, ended with Santa Barbara getting the lead back and gaining the victory.

Working hard for every basket they got, UCSB was able to edge out the home team by shooting a slightly higher field goal percentage (42.6 percent), compared to Cal State Fullerton’s (39.2 percent).

Redshirt senior forward Drew Edelman had another big game, achieving her third straight double-double with a stellar performance consisting of 22 points on 10-for-15 shooting and 11 rebounds.

Junior guard Hannah Thompson led the Titans with 13 points, and freshman forward Carolyn Gill had a commanding 11 points and 8 rebounds.

Gill has been a big factor for CSUF both offensively and defensively, as she got buckets and proceeded to force the Gauchos to commit several turnovers. The tandem duo of Thompson and Gill will be worth watching for Santa Barbara in the next game.

Bench play for UCSB will need to be productive to keep up with CSUF’s bench play.

Freshman guard Triann Thompson and freshman forward Xinavane Foreman give the Titans a spark off the bench, and will need to be contained on Thursday.

Thompson flirted with a double-double, contributing eight points and seven rebounds, while Foreman ended the game with six points and five rebounds.

When asked about what the team did right to end the game with a win and what she plans on implementing for Thursday’s matchup, Head Coach Bonnie Henrickson noted:

Henrickson went on to speak about how the team game plan for the upcoming game will not differentiate much from their game plan the last time the Gauchos played the Titans just a few days ago.

The visiting Gauchos showed a big defensive presence against Cal State Fullerton in the matchup and will need to bring that same energy and pressure on Thursday, if they want to end the game with the same result.

Though CSUF is only 2-8 in conference play, Henrickson made it known that their upcoming opponents are not to be taken lightly.

“You can’t look at their record and say ‘they are this, because this is what their record is.’ They’re not. They have been in single-digit games, just like ours. We don’t do that going into the game,” she explained.

“We are hunting and building momentum to try and get success. We’ve got to make sure to bring our A-game for forty minutes because we did for a chunk of the game, but obviously not when we allowed them to shoot such a high percentage from the floor. They got layups, offensive rebounds and got to the free throw line. We’ve got to turn them over and be more aggressive.”

Santa Barbara will need to remain focused on both ends of the court and be more conscientious about keeping any lead they build so as to obtain and sustain the advantage against CSUF.

Catch the Gauchos against Cal State Fullerton at home in the Thunderdome tonight, Feb. 15 at 7 p.m.