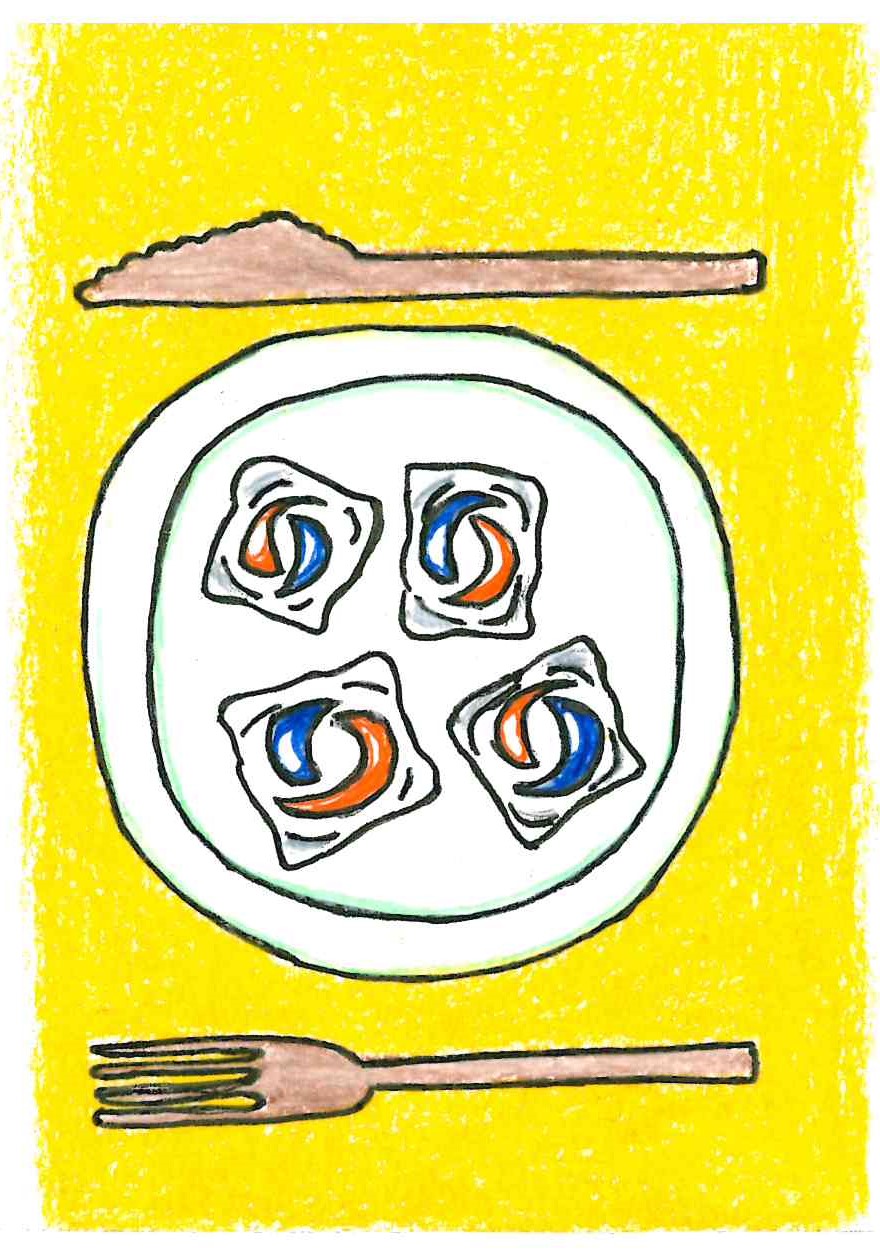 Eve was warned: Just don’t eat the apple. She did though, and it looks like after all these years some of us still haven’t learned our lesson from her critical mistake. But instead of an apple, our modern forbidden fruit is a shiny, colorful packet of laundry detergent.

As much as I hate to admit it, I can’t deny that Tide Pod memes are hilarious. My personal favorite is a plate of Free & Gentle Tide Pods garnished with mint to look like a ravioli dinner, or it’s maybe some kind of scallop dish. You know exactly which one I’m talking about. However, supporting and spreading such memes spreads an extremely dangerous idea that has real and potentially lethal consequences.

These people participate in the Tide Pod Challenge because they know they’ll receive a positive response for videos of bulging pods grotesquely bursting between molars.

Like most meme trends, the appeal of the Tide Pod lies in its relatability. This particular meme is simultaneously perplexingly bizarre and completely understandable. On one hand, the vast majority of us understand that the pods are full of dangerous toxins and chemicals we absolutely should not be ingesting. On the other hand, however, the candy-like visual appeal of bright fruity colors and glossy coating brings up fond thoughts of Fruit Gushers and other snacks too tempting to deny.

What’s more, people love attention, and participants of the Tide Pod Challenge get plenty of it. The Tide Pod Challenge, reminiscent of the Cinnamon Challenge, involves subjects filming and posting videos of themselves chewing and sometimes even swallowing laundry detergent pods. These people participate in the Tide Pod Challenge because they know they’ll receive a positive response for videos of bulging pods grotesquely bursting between molars. Videos posted to YouTube have reached up to millions of views, such as the one posted by user Jake Iannarino.

The phenomenon actually has a psychological name, “groupthink,” where people forsake common sense and personal responsibility for general conformity (i.e. “Tide Pods are the best pizza topping). It’s an issue common in young people striving to fit in, take risks and be funny. Groupthink results in dysfunctional decision-making abilities — in this case, the decision to either ingest detergent or forego a stint of internet fame.

The various liquids inside Tide Pods and other detergent packets are far more dangerous than many people seem to believe, as innocent as the pods might appear. According to the Tide website, laundry detergent contains various toxic substances including ethanol, an alcohol; hydrogen peroxide, a bleaching agent; and polymers, also known as soap. Even the material used to make the membrane encasing the pod, polyvinyl alcohol, is toxic. Furthermore, because only one or two pods are meant to suffice in cleaning a load of laundry, the detergents and other liquids in the pods are packaged at concentrations far higher than standard liquid or powder detergent, making them far more dangerous.

According to the Center of Disease Control (CDC), any form of oral contact with a detergent pod—even if unswallowed—could lead to vomiting, seizures, swallowing dysfunction, breathing difficulties and in extreme instances, death. Patients often require immediate intubation and endoscopy. In the long term, they may also suffer mental status changes and require speech therapy.

Sure, the number of people who are foolish enough to actually try eating Tide Pods is extremely low compared to the vast number of people just joking about doing it. Nevertheless, it’s still a significant statistic. According to the American Association of Poison Control Centers (AAPCC), between Jan. 1 and Feb. 1 there were 145 cases of intentional exposure to liquid laundry packets among 13 to 19 year olds. The number of instances reported in just the past month is nearly three times as high as the number reported in all of 2017: 53 cases.

Memers need to start taking the hazards of spreading Tide Pod memes seriously. That goes for food businesses, too, as in the instance of donut shops Wake N Bake in North Carolina and Hurts Donuts in Kansas, both of which began decorating donuts with color schemes resembling the now-iconic design of Tide Pods. Or Vinnie’s Pizzeria in Brooklyn, which now offers a “PIEd Pod”, a pizza roll topped with cheese dyed blue and orange.

Procter & Gamble (P&G), producer of Tide products, has made attempts to stop Tide Pod consumption via efforts including a video advertisement with New England Patriots star Rob Gronkowski [[ok]] pleading teenagers to stop eating pods. Nonetheless, the campaign is clearly ineffective given the spike in intentional exposure rates as reported by the AAPCC.

The issue is that people are already well aware that Tide Pods are dangerous. In fact, they continue to eat pods because they know they shouldn’t be and are tempted by the thrill of partaking in dangerous, prohibited activities. Thus, the only way to stop laundry detergent poisonings is to stop making Tide Pod consumption look cool.

Call it a joke, call it natural selection, but for the sake of the physical safety of the general meme-browsing population as well as P&G’s liability team, at least try not to support the Tide Pod movement.

Anyi Cheng is stunned that she has to write an article telling people not to eat Tide Pods.