The Santa Barbara County Board of Supervisors passed a Cannabis Land Use Ordinance on Tuesday that creates a 750-foot buffer zone between medical marijuana dispensaries and areas with schools or daycare centers. 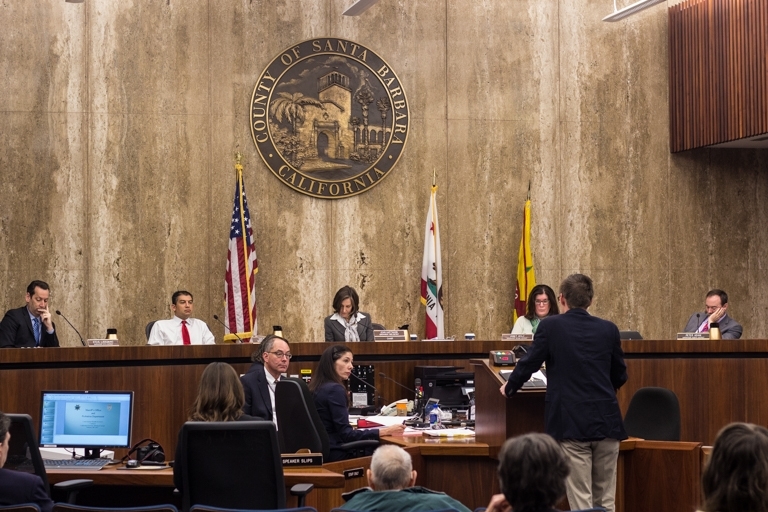 Under the resolution passed by the Planning Commission, dispensaries must remain at least 750 feet away from schools and day cares, up from 600 feet. Jose Ochoa / Daily Nexus

The ordinance limits the growth, distribution and processing of marijuana products throughout the county.

The Commission had considered increasing buffer zones from 600 feet to 1,000 feet, which would have encompassed a majority of the commercially zoned properties in Isla Vista.

The current ordinance only allows non-storefront retail and has little effect on I.V. Elementary School, which is located nearly a mile away from the downtown commercial area.

According to the final Environmental Impact Report, the ordinance was proposed to “prevent impacts of cannabis activities on children, sensitive populations, the natural environment, and public health and safety.”

This was a controversial issue and public forum took several hours at Tuesday’s Board of Supervisors meeting. Many Carpinteria residents took issue with the agricultural side of the ordinance, citing noxious odors and concerns about fires or crowds.

These issues are largely irrelevant to I.V.; although growing marijuana would be restricted due to the mostly residential zoning, there is little open space suitable for agriculture.

Some UC Santa Barbara students who oppose the ordinance spoke at last week’s Associated Students Senate meeting, sharing their experiences with consuming contaminated marijuana, which created an unsafe situation for themselves and others.

Spencer Brandt, Board Secretary of the I.V. Community Services District, authored a letter in support of maintaining the 600-foot buffer zones. The letter gathered 60 signatures.

“Cannabis dispensaries in Isla Vista would allow residents that are of age to legally purchase marijuana, rather than buying unregulated, untested marijuana on the black market,” reads the letter. “Bringing these activities out from the underground, where they can be monitored and regulated, safely purchased, and responsibly used is a top priority for our community.”

The letter also addresses the potential for increased tax revenue, which could be used to improve public services. Brandt said that by increasing I.V.’s tax inputs to the county, requests for services like sidewalks will carry more weight.

Brandt spoke about and distributed the letter at Senate, where several senators voiced their support.

“The vast majority of senators are supportive of this,” Brandt told the Nexus. “This isn’t just about a bunch of college kids coming together to smoke some weed.”

Those applying for a microbusiness or distribution license will have to present an Odor Abatement Plan, which will prevent any odors from reaching residential areas. The plan must include a floor plan explaining any odor-emitting activities and specifying where they occur.

“We successfully preserved the ability to have a dispensary in Isla Vista,” Brandt said. “There is broad support for a dispensary in I.V., and I think potential small business owners should look closely at our community.”

Correction: The Santa Barbara County Board of Supervisors passed on the ordinance, not the Planning Commission.

UCSB students want to get stoned. What a surprise.