The Daily Nexus
Opinion
Negativity: A New Social Norm
February 5, 2018 at 12:28 am by Alaina Ayres 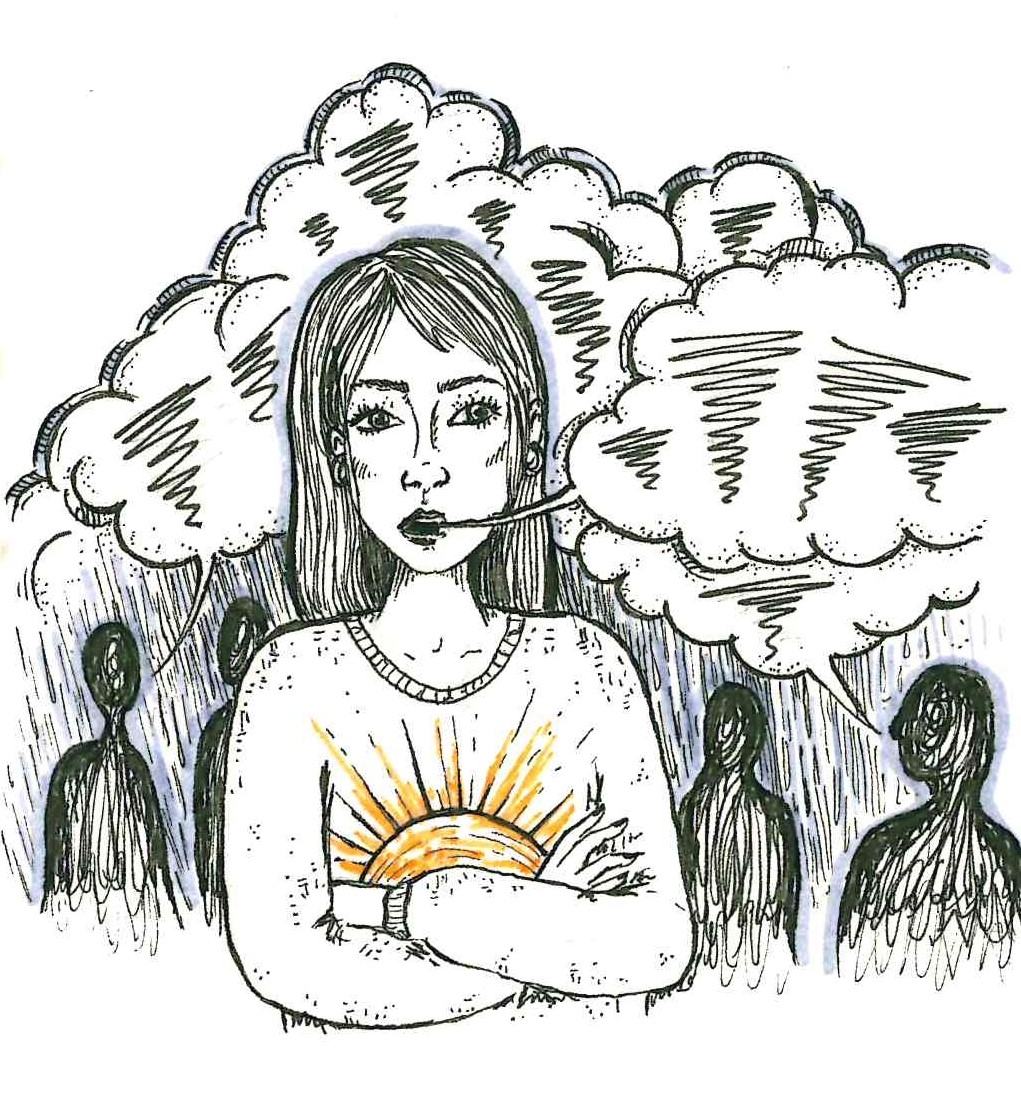 Have you ever told a friend about a particularly shitty day, only for them to respond with a similar story, and all of a sudden it has turned into a competition of “who’s had a worse day?” Often, joking about a bad day or a hardship can seem like a simple way to reduce the pain that it causes you, but rather, it makes you more comfortable with the mental strain it causes and lowers your tolerance. Consequently, this way of conversing has created an environment in which reinforcing negative thinking has become the new social norm.

Lately, I’ve begun to notice this trend in the attitudes of my peers more and more, and have realized that even I am sometimes guilty of participating in this behavior. After finishing one of my finals for fall quarter, I felt immense relief. I studied for weeks on end and walked out feeling extremely confident in myself — that is, until a friend of mine approached me saying, “I definitely just failed that test. Oh well, I only need a C to pass the class.” In fear of coming off as conceited, I quickly responded “yeah, that was the hardest test I’ve ever taken.”

Before I could even make it out of the lecture hall, multiple people had come up to me sharing similar doubts. Prior to these conversations, I was convinced I’d aced the test, but upon hearing how poorly other people felt about it, I wasn’t so sure. My confidence immediately diminished and I started to question my own potential to succeed. How could I go from feeling so self-assured, to feeling insecure in a matter of minutes?

Soon enough, the continuation of this negative mindset begins to eat away at your well-being, sending you into an abyss in which you can’t escape.

It has become the norm to inject comments about the negative aspects of your life into everyday conversations, sometimes even with people you’ve just met. It seems like such a strange concept to discuss your pitfalls with a stranger, but this normalization of negative behavior makes a lot of people appear more relatable to others.

On the surface, this behavior doesn’t seem entirely destructive. Sure, everyone has bad days and sometimes you just need to vent about it, but that’s a given. However, the perpetuation of this behavior affects many people’s mental health. It reinforces these negative remarks—which, at first glance, may seem like harmless conversational jokes at first such—and conditions our unconscious selves to lower our standards and settle for mediocrity.

Because so many people use self-deprecating humor in average, day-to-day situations, mental health issues such as depression and anxiety are so easily looked past and disguised, and even seen as inferior to other health issues. Soon enough, the continuation of this negative mindset begins to eat away at your well-being, sending you into an abyss in which you can’t escape. Some of the greatest minds—your friends, family, even yourself—fall into this rabbit hole of negative thinking, and, instead of directly addressing the issue at hand, they perceive this way of living as normal because of how casual and “humorous” of a conversational topic it is.

Although some people use dark humor merely to make a joke, many people use it as a defense mechanism to hide more serious, deep-seated issues in order to avoid directly approaching the conflict. Because of these problems, it has become hard not only to identify when someone close to you is experiencing mental health issues, but also for these people to reach out for help.

Changing your mindset and the way you experience your life takes a lot of hard work, and let’s face it: change is utterly terrifying.

Oftentimes, the people who constantly succeed in every aspect of life are seen as the “lucky ones”, as if they are a completely different breed of human put on this earth to create some type of social balance. However, the difference between these people and those who engage in negative behavior is the way they’ve conditioned themselves: not only do they usually stray from participating in social norms, they challenge themselves to step out of their comfort zone nearly 100 percent of the time.

Recently, I started to watch the FX show Atlanta, a show ultimately about a man trying to improve his life. At one point in the show, the main star, Donald Glover, makes the remark, “I just keep losing. Are some people just supposed to lose?” This comment really sat with me; this is a show about a man wanting to create change, yet he persistently engages in negative behavior. You might be thinking, “Well, why can’t he just start to think about the positive aspects of his life instead of the negative?” In reality, changing your mindset and breaking negative habits is much more than merely telling yourself not to be so negative all the time.

Changing your mindset and the way you experience your life takes a lot of hard work, and let’s face it: change is utterly terrifying. But the necessary change ultimately lies within yourself. The only way to change your mindset is to change the person you are, and, for almost everyone, this doesn’t come overnight. However, taking small steps to create change can make the journey more bearable—enjoyable, even. That being said, this journey will certainly vary from person to person. For example, to some this means making the conscious effort to stray from engaging in these norms, and for others it might mean utilizing more resources, such as counseling services or reaching out to loved ones. Nevertheless, for everyone this process takes an immense amount of self-compassion, which is necessary for every element of life.

Alaina Ayres wants people to get their heads out of the clouds and try to see the brighter side of life.

Amazing viewpoint of how negativity can impact your life. This inspires me to take a step back and look at my own mindset and how it affects my day to day life. Very well worded and written!

Very well written article on a very important trending topic amongst our generation! Always gotta keep a positive outlook on life. Love the reference to the show Atlanta as well. Definitely a great read, thanks for sharing!