Postdoctoral scholar and seminar lecturer Matthew Hangauer recently presented his research on drug-resistant cancer cells, their underlying mechanisms and possible weaknesses. Every so often, guest lecturers like Hangauer are invited to share their research at special seminars offered at UC Santa Barbara. In this presentation, Hangauer and a team of UC San Francisco researchers discovered a common weakness in drug-resistant cancer cells, or “persister cells.”

When in an invasive state, persister cells were susceptible to ferroptosis, a form of cell death, triggered by the absence of a specific enzyme: glutathione peroxidase 4. These findings hold immense potential in a clinical setting.

Up until recently, it was widely believed that drug resistance in cancer cells was genetic by nature. In other words, a few cancer cells would acquire drug resistance through mutations and produce a new drug-resistant population. The discovery of persister cells, however, showed a different perspective: a small percentage of tumorigenic cells actually exist in a dormant state, evade death and reactivate later.

The non-genetic mechanisms by which persister cells form are still unclear. Hangauer and his colleagues began looking for differences in gene activities between persister cells and untreated cancer cells in a breast cancer cell line. 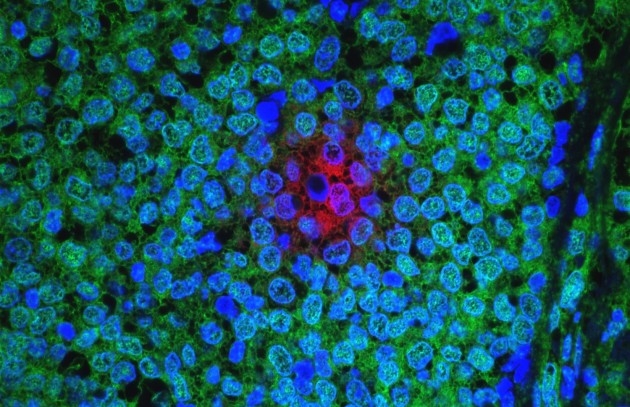 A small percentage of cancer cells known as persister cells can reversibly enter a dormant state, resist treatments and cause tumor recurrence. The non-genetic mechanisms by which persister cells form are still unclear. / Courtesy of cancer.ucsf.edu

“I focus on the discovery of genes, such as GPX4,” Hangauer said in an email, “which can be exploited through novel drugs to eliminate residual tumors after initial successful therapy to prevent the recurrence of tumors later on.”

“The next step is to develop a GPX4 chemical inhibitor that works in live animals,” Hangauer said. “The current GPX4 inhibitors do not reach the GPX4 target in mice due to poor bioavailability.”

For a pre-clinical experiment, Hangauer’s team knocked down the GPX4 gene and observed tumor growth in mice, using the CRISPR-Cas9 gene editing technology. Similarly, mice in the control treatment (GPX4 present) experienced tumor recurrence while the mice in the experimental condition (GPX4 absent) did not.

While these findings seem promising, there are still some issues to be addressed before viable treatments are made. For example, the GPX4 gene provides antioxidant defense mechanisms that protect cells from lipid peroxidation. It would be extremely harmful to animals if this gene were to be completely inhibited or removed.

“Once such a chemical inhibitor is available, then the efficacy and toxicity of GPX4 chemical inhibition can be assessed in animal models of cancer before entering human clinical trials,” Hangauer said.

Hangauer hopes to develop therapeutic approaches to turn transient cancer therapy responses into permanent ones. The goal is to develop a chemical tool that can change the way oncologists understand and treat cancer.

“To do this, I seek to discover how cancer cells stay alive despite being exposed to potent cancer killing drugs, and to leverage this insight into new therapeutic strategies. The long-term goal is to carry these ideas all the way into the clinic in the form of novel therapies to provide benefit to cancer patients.”