All-Pro Wide Receiver Santana Moss once said “Big time players make big time plays in big time games”. Often this is true, whether it be Eli Manning leading the Giants on a fourth quarter comeback, or Jerry Rice cutting through the Bengals defense play after play, many Super Bowls have been decided simply by a great player taking control of the game. Although football is most definitely a team sport, it is also one in which moments and players are mythologized. “The Drive” and “The Catch” are two examples of how football fans and analysts love to find and memorialize key plays and players, especially in the biggest game of all.

Super Bowl LII will be between the NFC Champion Philadelphia Eagles and the AFC Champion New England Patriots. As a Giants fan who has rooted against both these teams on many occasions, it pains me to say that they both have proved to be the best in their respective conferences without a doubt. Even with key injuries to both squads (Carson Wentz being out for the Eagles, Gronk missing some time for the Pats) they have actually gotten stronger as units as the year has gone on, which is precisely why it is hard to single out who the x-factor’s will be on both sides. Instead of just choosing a player who I think will be the best for each team, I split potential players into two tiers based on how likely they are to win Super Bowl MVP and overall what their impact will be on the field. 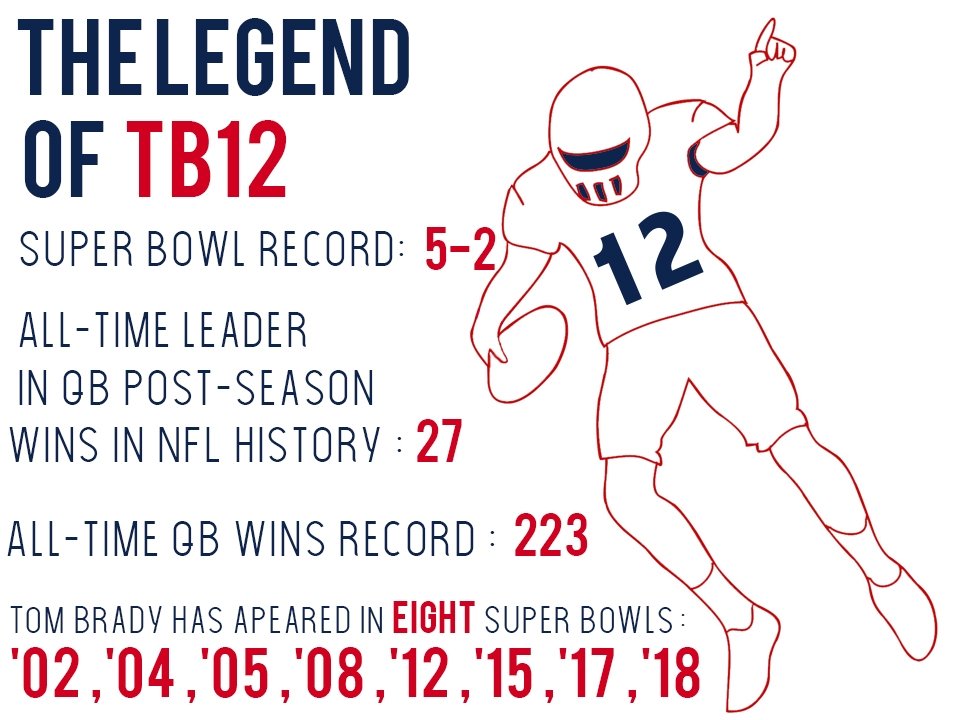 Quarterbacks have won Super Bowl MVP 28 out of the 51 times the award has been granted. I predict that this year won’t be any different as both Tom Brady and Nick Foles, who have the best and second best chance to win the award according to Vegas, pretty much will have to carry their respective offenses. The Eagles and Patriots finished the regular season as bottom 10 rushing teams, and the Pats have only managed to muster up 73.5 yards per game in the playoffs. Foles and Brady have done a good job handling this load so far, as their 122 and 107 QBR show, but it remains to be seen which one will outshine the other.

As opponents of the Patriots have learned in the past, the best way to mitigate Tom Brady’s impact is to get pressure on him, and if there is one thing Eagles DT Fletcher Cox knows how to do it’s creating pressure. His 10 combined tackles in the Postseason is the highest among Defensive Tackles, and while he only has one sack so far the amount of pressure he’s created indicates that he’s due for some more. If he’s able to disrupt the Patriots offensive line that’s only given up 3 sacks this year he could be heading home with the SBMVP trophy. On the Patriots side, Tight End Rob Gronkowski could be geared for a big game of his own. After being sidelined in the AFC Championship game with a concussion, Gronk will be looking to take advantage of his size in this upcoming matchup. He’ll have about a 6” height and 60 pound weight advantage over his primary defender who will be safety Malcolm Jenkins for the Eagles. IF Gronk is able to open up the field for Tom Brady, there’s no doubt that the Eagles will have a very tough time staying in the game, and he will likely be adding a Super Bowl MVP trophy to go along with a third championship ring.