The Daily Nexus
News
New Lieutenant to Head Up Isla Vista Foot Patrol
February 1, 2018 at 12:37 am by Shomik Mukherjee

The Isla Vista Foot Patrol (IVFP) is led by a new station lieutenant who took over the position this week after the departure of Lt. Ruben Cintron. 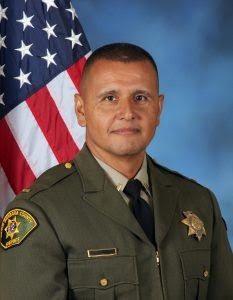 Lt. Juan Camarena will transfer from the Human Resources Bureau of the Santa Barbara Sheriff’s Office (SBSO), where he has worked for 19 years, including service in the Major Crimes Division.

Cintron was transferred to the Criminal Investigations Bureau, where he intends to ride out a nearly 28-year career into retirement. His transfer was part of a regular SBSO rotational schedule, under which officers serve for about two years in a division before rotating to another job.

This won’t be the first time Camarena will serve in I.V., as he worked brief stints with the IVFP while he was a sheriff’s deputy in the late 2000s. He noted that I.V. today has a far less populous weekend party scene, crediting his predecessors for “making things safer” for the community.

Born in Mexico to migrant field workers, Camarena is a first-language Spanish speaker, reader and writer. He joined the Marines out of high school before starting at the SBSO.

Camarena said he will open his doors to both UC Santa Barbara students and I.V.’s robust Spanish-speaking population. While he’s getting settled into the job and familiarizing himself with the neighborhood, he said he will work to police by the “golden rule.”

“Using just the simple values I learned from my parents will open the doors for me to address the community and build that trust,” he said.

I.V. residents in the past year have reacted strongly to reports of burglaries and sexual assaults.

In May, Cintron attended an I.V. Community Services District Town Hall to address resident concerns directly. Camarena emphasized his own commitment to preventing assaults from occurring. While law enforcement won’t have all the answers, he said, a unified I.V. might be a step toward solution.

“Little by little, I’m trying to introduce myself to the different communities so we can see what we in law enforcement and the community need to do to find that fair balance, so I.V. will be a safe place to live, to work in and visit,” Camarena said.

Cintron, by the numbers

Since Cintron came onto the IVFP in March 2016, crime rates have roughly improved in the neighborhood over a two-year period, according to statistics provided by SBSO spokesperson Kelly Hoover.

When it comes to simple and aggravated assault, the numbers fluctuated.

Cintron, who took up the post of station lieutenant in March 2016, said he believes he helped I.V. continue a “trajectory toward the better” during his time.

“I fully embraced and engaged with the community,” he said. His proudest efforts were put toward preserving community safety and reducing police presence during Halloween weekends.

Law enforcement presence decreased under Cintron’s watch, alongside a decline in crime. During the four-day period through Halloween 2016, the IVFP stationed nearly 300 officers. Less than 100 IVFP officers patrolled the streets during the same period in 2017.

Cintron’s tenure didn’t go without controversy. A proposed noise ordinance in Oct. 2016 threatened to scale existing “no-loud-music” restrictions from midnight back to 10 p.m. on weekend nights. A sizable community response, comprised mostly of UCSB students, railed against the proposition. The IVFP promptly delayed and later nixed the plan.
Cintron maintains that the noise ordinance was never his idea; before he’d arrived, the IVFP was “constantly” receiving noise complaints and Cintron was told to finish the job, he said.

Nearing 30 years on the job at the SBSO, Cintron’s stint in I.V. will likely be the penultimate leg of his career.

“It was a challenge, but I learned a lot,” he said. “A lot of different ideas from different people. It was a good time. A good two years.”

A version of this story appeared on pg. 4 of the Feb. 1 issue of the Daily Nexus.