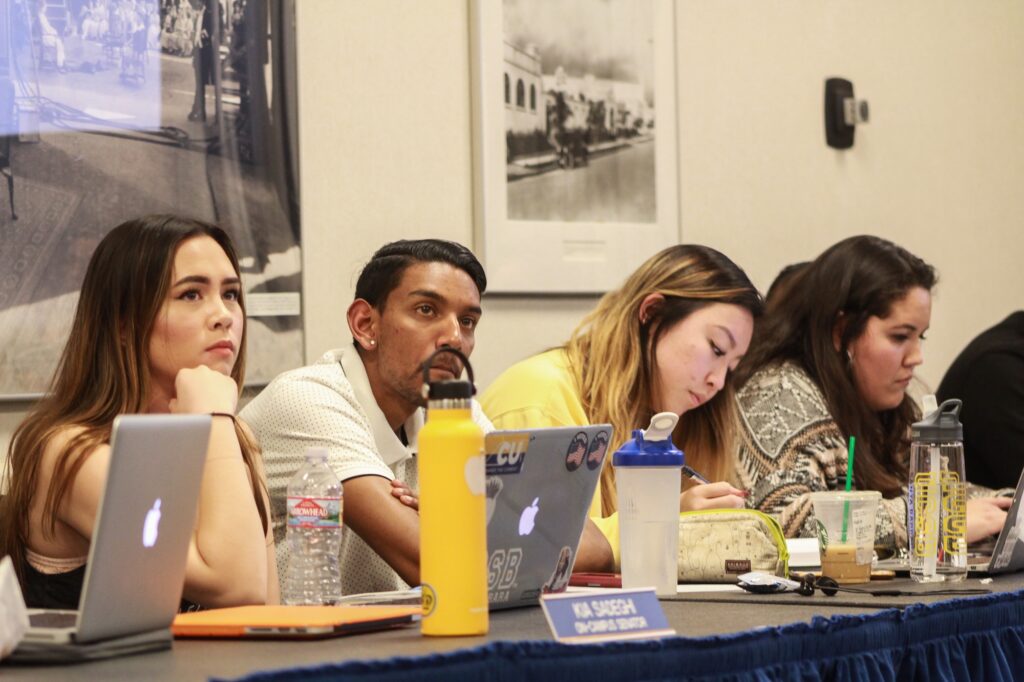 Senators Anthony Pimentel and Alison Sir will be holding a Housing Ad-Hoc Committee
on Feb. 2 from 6 p.m. to 7:30 p.m. to discuss a plan combating the Personal Care Clause. Kaitlyn Nguyen / Daily Nexus

According to the resolution, numerous students have been removed from housing due to their mental disabilities. The resolution reads that disability discrimination is “an issue that constantly looms over UCSB students” and calls for the alteration or removal of the “Personal Care” clause in the UCSB housing contract.

The “Personal Care Clause,” located under the Personal Care section of the housing contract, states that “residents are responsible for their own self-care and personal needs.”

The resolution was authored by Senator Alison Sir and Senator Anthony Pimentel and was developed and finalized on Jan. 23, according to Pimentel.

“I felt a resolution was the most efficient solution to make a plan of action by creating a committee and working on this issue head on,” Sir said.

She added that the students who brought the issue to her attention would like to remain anonymous due to the “extremity and sensitivity of this particular issue.”

Pimentel said that the issue was first brought to Sir and she asked him to be the co-author. Students with a mental disability are part of a community that is oftentimes “overlooked,” Pimentel said.

The resolution states that the “personal care” clause should be eliminated and a new clause dedicated to students with disabilities should be created.

The Senate demands that UCSB Housing include a new clause dedicated to students with disabilities because “citing C.A.P.S. is not acceptable.”

The UCSB Housing contract states that Counseling and Psychological Services (C.A.P.S.) is available 24 hours a day, 7 days a week through 805-893-4411.

Additionally, the contract states that C.A.P.S. offers a large range of services, including crisis intervention, individual and group counseling, psychological assessment, stress management and referrals to outside agencies.

The Senate resolution, however, states that C.A.P.S. is prevented from “being an adequate source of relief for students with short- and long-term mental illnesses” because only a limited number of appointments can be provided for each student.

The resolution adds that C.A.P.S. is “severely understaffed.”

Sir said she and Pimentel are currently planning to have a meeting with C.A.P.S. to discuss the program and the concerns outlined in the resolution.

The clause “provides much gray area for Housing and Residential Services to work with in illegally excluding mentally ill students from UCSB Housing,” according to the resolution.

Currently, it is “considered reasonable” for UCSB Housing to remove or reject individuals who have a history of mental instability and who are not currently being treated to “mitigate the mental instability,” according to the resolution.

On-campus housing is held to different standards than other landlord-tenant relationships as a government community-based housing entity.

Pimentel and Sir will be holding a Housing Ad-Hoc Committee Feb. 2 in the Nati conference room from 6 p.m. to 7:30 p.m. to discuss a plan combatting the Personal Care Clause, according to Pimentel.

Interested students and the general public are invited to attend to share their own experiences or voice their opinions on this issue, Pimentel said.

A version of this article appeared on pg. 1 of the Feb. 1 issue of the Daily Nexus.