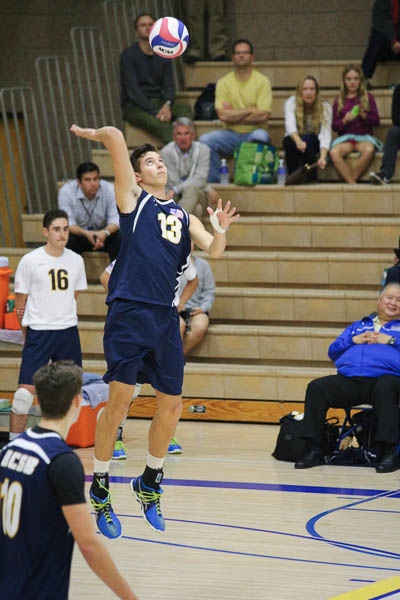 The No. 15 UCSB men’s volleyball team continued its road journey with a Thursday matchup against No. 7 Loyola University Chicago.

As expected, the matchup was intense as the first two sets of the match were decided by two points. Unfortunately for UCSB, an early lack of being able to close out sets while the Wolves worked their way back into the match ultimately led to the Gauchos 3-1 loss on the night.

Following the defeat, the Gauchos now stand at 3-2 as the early part of their regular season continues.

Upon entering Thursday’s match, anticipation of UCSB junior outside hitter Corey Chavers emerged as he was coming off his first career Big West Player of the Week honor following a career-high 24 kills in a win over No. 12 Pepperdine.

Santa Barbara’s All-American sophomore middle blocker, Keenan Sanders, finally made his season debut after missing the team’s first four matches of the season due to injury.

The first set featured an intense 25-23 victory in favor of the Loyola home side. At first, the Gauchos’ attack seemed to be firing on all cylinders. Although, it wasn’t until the final half of play that Gaucho mistakes started allowing the point gap to close in. Then soon after, UCSB allowed their 23-20 lead to falter as the Loyola Wolves clinched an upset set victory following their impressive come back.

The second set featured an even closer affair as an almost countless number of lead changes were experienced. A total of 16 different tie games were observed and this set seemed like it could have gone either way. Unfortunately, it once again was claimed by the Loyola home side following three consecutive serving errors from the visiting Gauchos.

In order to stay in the game, UCSB needed to extend the match by winning this following set. With a staggering hitting percentage difference of UCSB’s .265 to Loyola’s .086, the Gauchos reignited their potent attacking force. The set eventually resulted in a 25-18 score favoring UCSB.

In order to force a fifth set, the Gauchos would have needed to take this next set as well. However, a dominant 8 point streak by the host around the halfway mark of the set gave Loyola the advantage they needed in order to put this meet to bed. With the Gauchos hitting a game low percentage of .050, the final set’s score tallying in at 25-17, Loyola had done it and sent the Gauchos home with only their 2nd loss of the regular season.

Team leaders for this match once again included Chavers, who totaled 18 kills for UCSB. Combined, the team’s middle blockers of Sanders and red shirt sophomore Brandon Hopper also put up another 18 kills. Sophomore setter Randy DeWeese also got the job done once more with 39 assists.

The Gauchos will look to return to their winning ways this Saturday, Jan. 27, as they head away from home to face the Lewis University Flyers at noon.