The Daily Nexus
Sports
UCSB Searches for Season Sweep of CSUF, Looks for 3rd-Straight Victory
January 25, 2018 at 5:08 am by Omar Hernandez 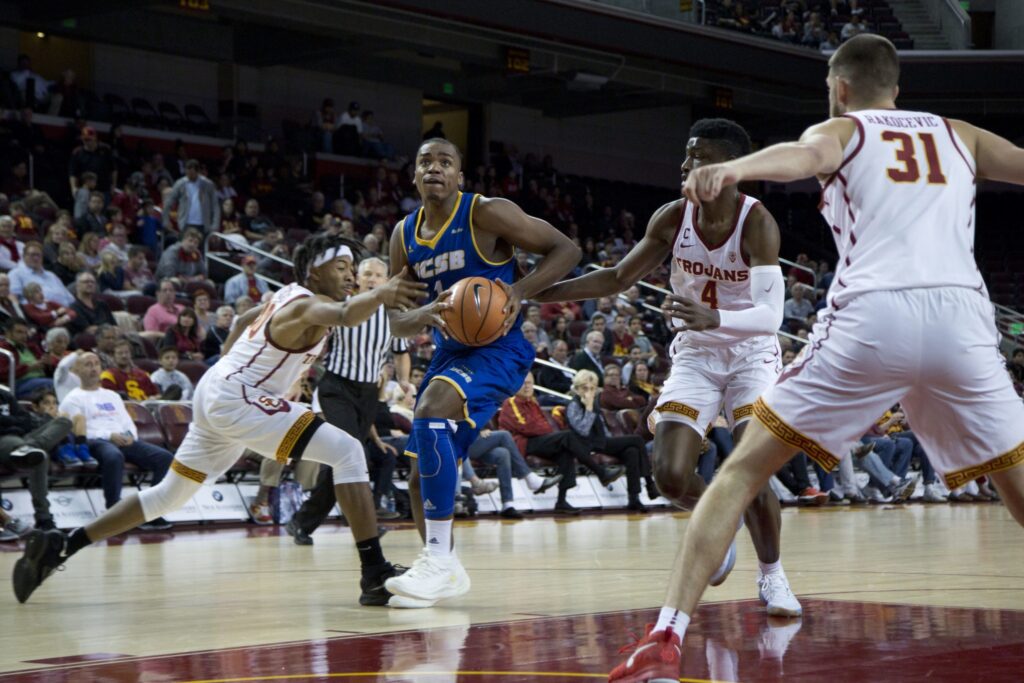 Coming off another blowout victory at home, the UCSB men’s basketball team looks to extend their winning streak to three against Cal State Fullerton on Thursday evening.

This will be the second time in the last week that the Gauchos and the Titans face off, with Santa Barbara having the 1-0 advantage after its 83-64 victory last Wednesday.

Cal State Fullerton currently sits two spots ahead of the Gauchos at second place in the Big West with an 11-7 overall, 4-2 conference record. UCSB has a better overall record at 14-5, but two blown leads have set them back a little bit in the Big West, where their 3-2 record is good for fourth place.

UCSB also comes into the game ranked No. 17 in the most recent Collegeinsider.com Mid-Major Poll. The Titans received three votes but ultimately couldn’t join the Gauchos as the only other Big West team on the list.

The Titans come into the matchup with a 6-1 home record, which is second in the conference only to UCSB’s perfect 9-0 start to the year.

One of the keys for the Gauchos will be limiting Fullerton’s transition offense and momentum in general in order to keep the crowd out of the game. UCSB hasn’t done a great job of imposing itself as a threat on the road so far, as the team is currently 4-5, but a solid win against a top two team in the conference would go a long way in making that happen.

One reason why the Gauchos were successful in the last meeting between these teams was the offensive versatility of the starting lineup.

While the two usual offensive stalwarts, sophomore guard Max Heidegger and graduate forward Leland King II, had a great game combining for 41 points, it was the double digit production from other players that pushed UCSB over the top.

Graduate guard Marcus Jackson had a season-high 19 points, and both senior guard Gabe Vincent and senior forward Jalen Canty ended with double digits to round out the starting five.

By diversifying their offensive attack, the Gauchos were able to spread out and overwhelm the Titans’ defense, which is what led to an early 15-point lead and the eventual 19-point blowout.

Fullerton will be looking to take advantage of the scoring ability of their bench to close the gaps between these two teams.

In the last matchup between these teams, the Titans bench outscored the Santa Barbara bench 17-2, and — as far as conventional basketball knowledge says — key players perform better at home than they do on the road.

While part of the discrepancy between bench scoring had to do with some garbage time scoring by Fullerton, the Gauchos have a real problem producing on offense when the starting five isn’t in, as they have shown with their two blown 20-point leads.

While these problems with offense for the bench won’t be solved overnight, they just make it that much more important for the Gauchos’ reserves to continue to play hard and smart on defense.

Two players to keep an eye out for on the Titans are guards Kyle Allman, Jr. and Khalil Ahmad.

The juniors make up one of the highest-scoring tandems in the Big West, with a combined 33.5 points per game.

The Gauchos played good defense on them in the last game, holding them .5 points below their collective average; however, containing them a second time will be much harder, especially at Fullerton.

Overall, this is a big game for UCSB in terms of standings.

A win will push the Gauchos up to second place and in direct contention with first place Hawaii, who they play next week.

Because of early-season miscues, there is a must-win mentality in this squad that trickles down from the high expectations set by Coach Pasternack and his staff.

All the players have to do is get out there and execute, which they’ve done a good job of so far.