President Donald Trump’s initial travel ban will reach its one year anniversary on Jan. 27 after a year of emotional uncertainty for many international students at UC Santa Barbara. 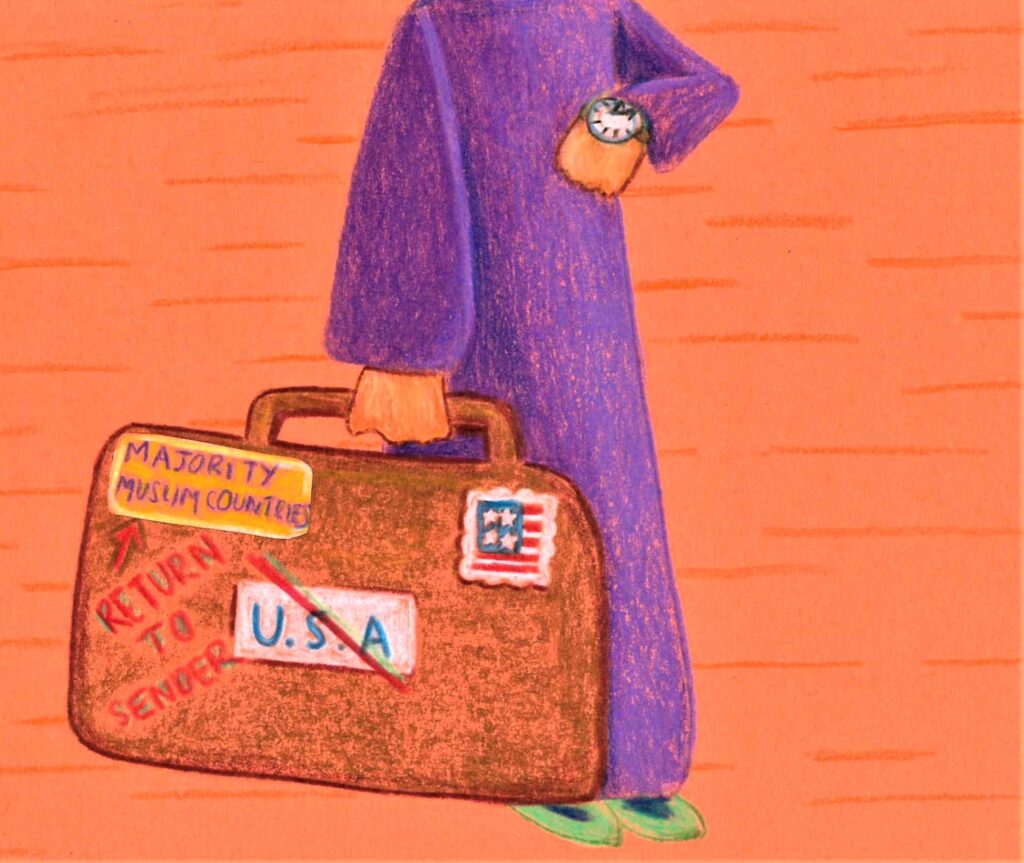 The travel ban was first issued on Jan. 27, 2017 and banned citizens from Iraq, Syria, Iran, Libya, Somalia, Sudan and Yemen from entering the United States for 90 days, as well as indefinitely refusing entry to refugees from Syria.

The ban is also commonly known as the “Muslim ban” because the majority of citizens from six of the banned countries are Muslim.

This ban has had lasting consequences for UCSB students.

Electrical engineering graduate student Maryam Rasekh said many students who plan to apply for jobs for their Ph.D. are unable to apply to positions outside the U.S. because the process includes interviews at the institution.

If students travel to their interviews, they may not be able to return to the U.S.

“We miss out on so many opportunities,” she said in an email.

The Nexus reported in Feb. 2017 that Rasekh’s entry to the U.S. was initially denied when Trump’s travel ban was first introduced.

While she was later able to enter the U.S. to attend UCSB, she is currently unable to travel back to Iran to visit her parents because Iranian visas are “almost always single entry.” Whenever Iranian citizens travel outside of the U.S., there is a risk that they will not be issued a return visa.

Leila Zonouzi, an Iranian graduate student in the global studies department, has also been affected by the travel ban. Her in-laws were unable to attend her wedding because they were still under “administrative processing” after almost a year.

In the days following the initial ban, federal judges attempted to halt the executive order as Trump faced both criticism and praise for his decision. U.S. District Court Judge James Robart blocked the ban nationwide in a Feb. 3 decision and a second travel ban was introduced on March 6.

The second ban removed Iraq from the previous list of countries and banned citizens from Yemen, Syria, Somalia, Sudan, Libya and Iran from entering the U.S. for 90 days and all refugees for 120 days. The ban was later blocked by a U.S. District Court judge on March 15.

While the debate over the ban’s legality continued, the Supreme Court allowed a third revision of the ban to remain in place until the court decided if the ban would remain permanent. They will rule on the legality of the ban by the end of June 2018.

Zonouzi said she “cannot begin to say how infuriating and belittling this situation feels,” recalling that some of her friends went through childbirth without their mothers holding their hands.

“Although the government has claimed that parents and grandparents can still get visas under the ban, with prolonging the visa issuance process, they have implemented the ban and have hindered families from getting together,” Zonouzi said in an email.

Currently, the majority of citizens from Iran, Yemen, Somalia, Chad, Libya, Syria, North Korea and Venezuela are prohibited from entering the United States.

“If the travel ban goes into effect this could get even more serious and Iranians (and citizens of other countries on the list) will practically be trapped in the U.S. until they decide to leave for good,” Rasekh said in an email.

She explained that she has several friends who have missed funerals of family members because they cannot risk traveling to Iran without the certainty of returning.

“Many Iranians are forced to choose between risking their degrees and missing family emergencies or their loved ones’ funerals … having to make that choice deliberately makes it all the more painful,” she said.

She added that it is “very unfair and painful to have to choose between ending a relationship or withstanding the separation for extended periods,” Rasekh said in an email.

There were 3,022 international students enrolled at the UCSB campus for Fall Quarter 2017, according to the University of California website. Of those students, 44 hold citizenships from countries affected by the travel ban: 41 from Iran, one from Venezuela and one from Syria.

On a UC level, there are 42,473 international students enrolled across the campuses: 507 from Iran, 28 from Venezuela, five from Syria, two from North Korea and two from Yemen.

According to the UCSB Office of International Students and Scholars (OISS), student and scholar visas for Iranians are still being issued, while other visa categories have been suspended.

Travelers from North Korea, Somalia and Syria have had entry indefinitely suspended and those from Chad, Libya and Yemen have had all tourist visas suspended, according to OISS.

The website warns students to avoid any violations of their visas and to “think carefully before engaging in protest activities, as arrests can seriously impact immigration status or future visa applications.”

All non-citizens are required to carry their documents with them at all times by law, according to the OISS website. These are the 1-94 cards for non-immigrants or the 1-551 cards for permanent residents.

“My story is a droplet in an ocean of misfortune of other Iranians just for being born in the ‘wrong’ place,” Zonouzi said in an email. “You truly feel like you’re being treated as ‘less than’ just because your birth place is in the wrong geographical zone.”

Correction: Jordan was mistakingly listed in the numbers of UC students affected by the ban.

This ban was and remains a great idea and well within the legal authority granted by law to the executive branch of our government. Americans need to put our interests ahead of those of foreigners. And before you drop the usual criticisms – I’m a UCSB alum, with a masters degree, own a home in Santa Barbara, am multi-lingual and world traveled.

I’m so sorry the safety of the country is a minor inconvenience for you, a foreigner, when applying for a job here in our country.

As a Ph.D. in Germany, I can say, everything the USA have is only because of immigrants! Just take a look at the silicon valley and NASA. So, I can say now, the USA is not the land of opportunities anymore and in future Germany take its place.