The Daily Nexus
Science & Tech
Certification May Help Conservation Efforts
January 25, 2018 at 1:36 am by Stephanie Pernett

As Earth’s population grows, so does the demand for agricultural commodities such as cotton, corn, rice and others. This has put a strain on forests around the world.

While many corporations and countries have made efforts to only purchase and produce sustainable products, it remains unclear how successful these methods have been.

In a new study by UC Santa Barbara, economist Robert Heilmayr and colleagues were able to estimate the effect of sustainable certification, specifically for palm oil, on Indonesian plantations. They found that certification reduced deforestation among participating plantations. However, certification was mostly adopted in older plantations that contained little remaining forest. Broader adoption by palm oil growers is needed for certification to have a large impact on total forest area lost to palm oil expansion.

Sustainability certification is the tool most used by corporations to fulfill procurement policies, and around 20 percent of global palm oil production was certified by the Roundtable on Sustainable Palm Oil (RSPO) in 2017.

“RSPO certification has saved 21 square kilometers of Indonesian forests that would have been deforested,” Heilmayr, an assistant professor in UCSB’s environmental studies program and co-lead author, said. “To put that in perspective, that area is one-tenth the size of the home range of a Bornean elephant endangered partially by loss of its habitat due to deforestation.”

To evaluate whether certification fulfills such pledges, Heilmayr and colleagues applied statistical analyses to satellite-based estimates of tree cover loss to infer the causal impact of a third-party certification system on deforestation and fire within Indonesian oil palm plantations.

Heilmayr combined a new database of Indonesian oil palm plantations with satellite imagery of deforestation. The investigators then measured the amount of natural forest that was cleared in each of those plantations between 2000 and 2015. They estimated that RSPO certification reduced, but did not eliminate, deforestation in certified Indonesian plantations by about 30 percent, as compared to their non-certified counterparts with similar characteristics. 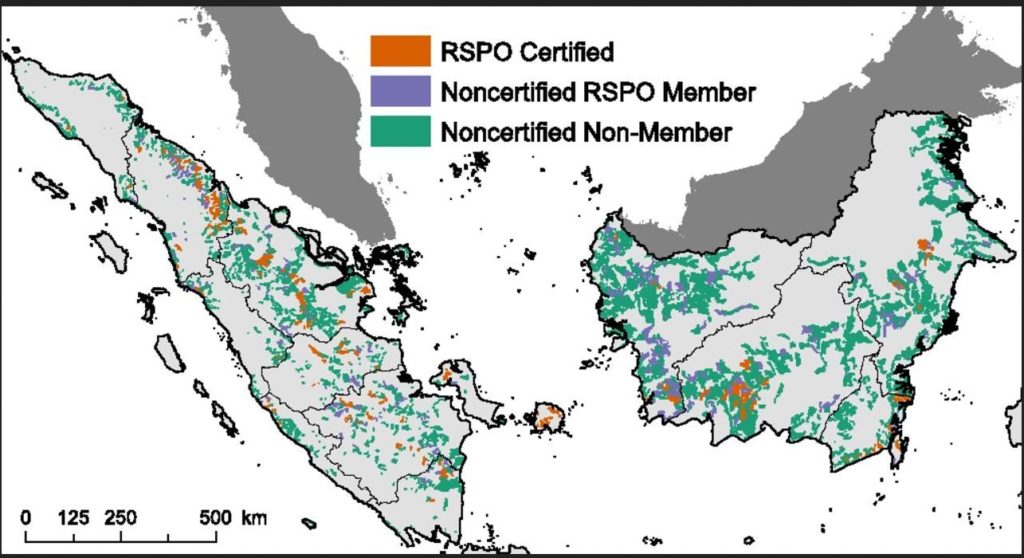 Above is a map of the palm oil plantations the research group kept track of. Plantation area totaled 187,567 km2. About 53 percent of the total certified area was in Sumatra, including the Bangka Belitung Islands, on the left, and 47 percent was in Kalimantan, which is on the right. / Courtesy of Proceedings of the National Academy of Sciences

The researchers also found that certification did not affect fire occurrence in these plantations or the amount of carbon-rich peat swamp forests cleared and drained for palm oil.

“We were pleased to see this positive effect, given that nongovernmental organizations have substantiated real cases of deforestation within plantations held by RSPO members,” Kimberly Carlson, of the University of Hawaii and co-lead author, said. “However, because palm oil companies have chosen initially to certify well-established plantations containing relatively few remaining forests, certification currently benefits less than one percent of the forests remaining in Indonesian oil palm plantations.”

The RSPO is under pressure to meet recent pledges by corporations and palm oil-importing countries to source only deforestation and peat-free palm oil. To enable compliance with procurement policies, the RSPO would need to develop a clear definition of “deforestation” that can be monitored using remote sensing. Remote monitoring of conservation set-asides, supported by ground-truth assessments, could demonstrate compliance.

The principles would need to be revised to require that certified supply bases were not developed from peatlands and areas defined as forest. However, such changes would likely increase the cost of certification, which threatens to exclude producers, especially small and medium-size growers, from the RSPO.

If membership stays stagnant or declines, the RSPO’s impact on forest conservation and other critical sustainability concerns in the oil palm sector, such as workers’ safety and water pollution, may decrease.

Currently, the RSPO NEXT standard allows producers that wish to meet zero deforestation commitments to become certified as no deforestation, no peat and no fire. Such tiered standards may be preferable if the goal is to retain and gain RSPO members.

Our research indicates that palm oil producers currently have few incentives to expand the area of forest under their control. It is difficult to align individual corporate decisions with broader conservation goals, such as halting tropical deforestation.

Positive incentives for forest protection, such as a price premium linked to forest conservation, may increase forest area preserved through certification. With around 20 percent of all global palm oil now certified, the RSPO has great potential to influence tropical land change. Whether or not Roundtable members embrace higher levels of stringency and transparency around land use change, and how such changes might affect incentives for RSPO membership will determine palm oil certification’s contribution to tropical forest conservation.