The Daily Nexus
News
Beaches in Goleta, Santa Barbara and Carpinteria Remain Closed Due to Contamination from Runoff
January 25, 2018 at 12:01 am by Tamari Dzotsenidze

Goleta Beach has remained closed after ocean samples tested positive for high levels of coliform and enterococcus caused by runoff from recent storms. 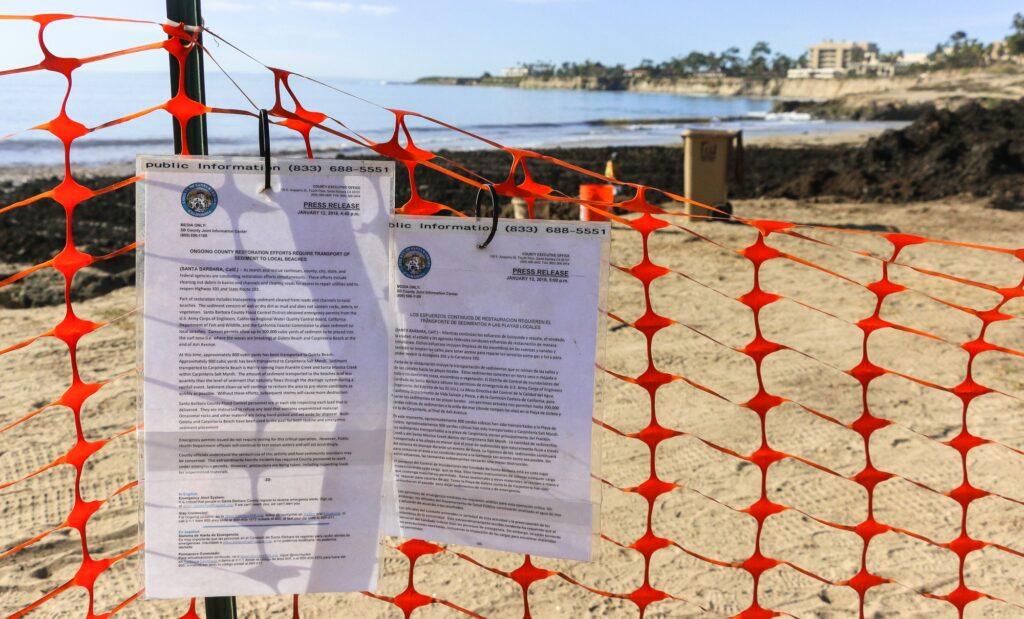 Exposure to higher levels of harmful bacteria can cause certain illnesses, including rashes, chills and ear infections. All water activities such as swimming and surfing and are highly discouraged.

Eight beaches in Santa Barbara County were closed. Bacteria levels are lower than they were when tested last week and six more beaches have been opened, including Sands Beach at Coal Oil Point. Goleta, Carpinteria and Hope Ranch beaches remain closed.

The Santa Barbara Public Health Department is unsure of how much untreated sewage and chemical contamination is in the water because of the devastating effects of the Thomas Fire and significant amounts of rain, according to a press release on Wednesday. The agency is urging the public to avoid contact with any sand or water that looks or smells unusual.

In an “abundance of caution” and to help with recovery, the department is also urging the public to stay out of the 400-foot buffer zone on each side of the beach where sediment from the mudflows is being deposited . The buffer zone is clearly marked with orange fencing.

Ocean water will continue to be tested for microbial contaminants until the beaches are determined to be safe. While there has been significant improvement since last week, it is still unclear when the beaches will be reopened.

According to the Environmental Protection Agency, coliforms are bacteria generally not considered harmful towards humans. However, increased amounts of coliforms can be indicators of other bacteria, viruses and parasites generally known as pathogens that can cause illness.

Susan Klein-Rothschild, deputy director of the Santa Barbara Public Health Department, said that this bacteria is generally filtered out through the soil, but that their presence in the water could indicate the presence of sewage waste or feces.

Beaches in Goleta, Carpinteria and Hammond had more than double the state health standard of coliform, with the rest of the beaches coming in under the standard.

According to Klein-Rothschild, the amount of coliform was too high to be counted, which was a cause for “serious concern.”

According to the Center for Disease Control, enterococci are generally found in the bowel and can be collected from water and vegetation generally as a result of contamination from untreated sewage.

A version of this article appeared on p.4 of the Jan. 25 print edition of the Daily Nexus.