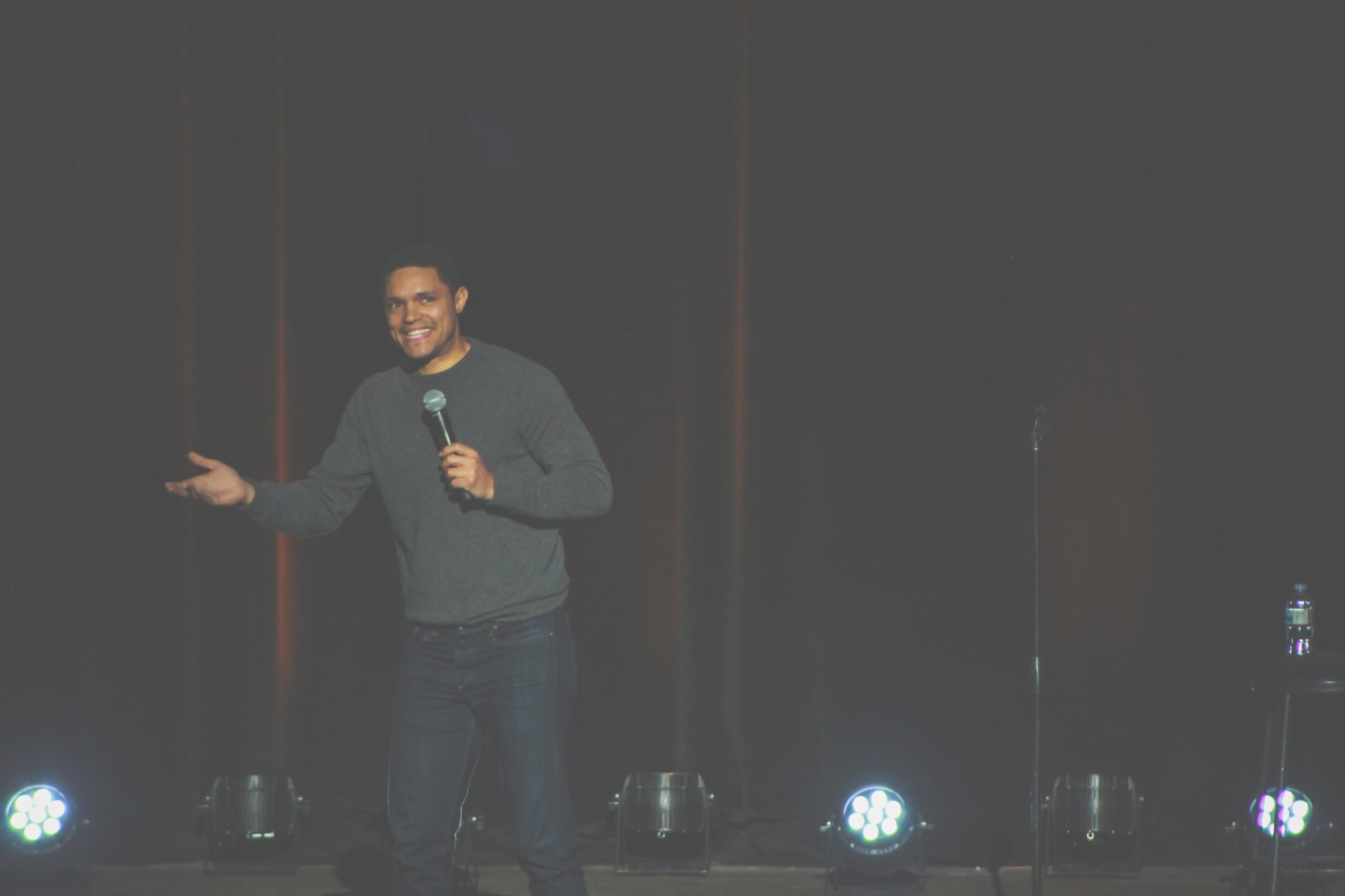 I recently watched the new Dave Chappelle special on Netflix, and his extreme political provocativeness made me crave that type of content from Trevor Noah. I know you cannot compare the two comedians, or any two comedians for that matter, but Noah’s knowledge base and experience with the current political climate sets him up for some witty Trump banter and cultural controversy.

As a News Editor, I was ready for some comedic relief from the daily issues I cover. Noah’s “Daily Show” satire and his stand-up routines overlap in some ways, but he makes them their own. Trevor, like in his memoir Born a Crime: Stories from a South African Childhood, talked a lot about his mixed ethnicity and the racism the world faces today, so when I heard he was coming to Santa Barbara to do a night of stand-up comedy, I immediately submitted for my press pass tickets. I had to see the heir to the “Daily Show” for myself.

Trevor Noah has every right to make the “Daily Show” his own.

In the age of late-night talk shows taking over television, Noah knows how to bring in the younger viewers, and you cannot blame him for knowing how to rile up millennials (myself included). He does not have to do exactly what Jon Stewart did for ratings. The times and the audiences are evolving and changing. Trevor knows how to adapt his satirical content to the politics and culture we live in now, and last Friday’s stand-up show was a testimony to his genius. I think it’s safe to say, “To each his own, and to each their own comedy style.”

All laughs aside, Trevor’s foreign and national affairs analysis is always clarifying and astute. His stand-up, like the show I got to experience at the Arlington, is almost always about racism and its role in his life and the world around him. I will admit that I wish he gave us more controversy because of the trying times we are in, but Trevor knows his audience and he still delivered and stirred the pot. As soon as he walked onto the stage he made it his own. The feeling reminded me of when I saw his first episode on the “Daily Show”: I was excited and waiting for him to call out white people for their complacency and racism. It’s not often you see a person of color take on late night. 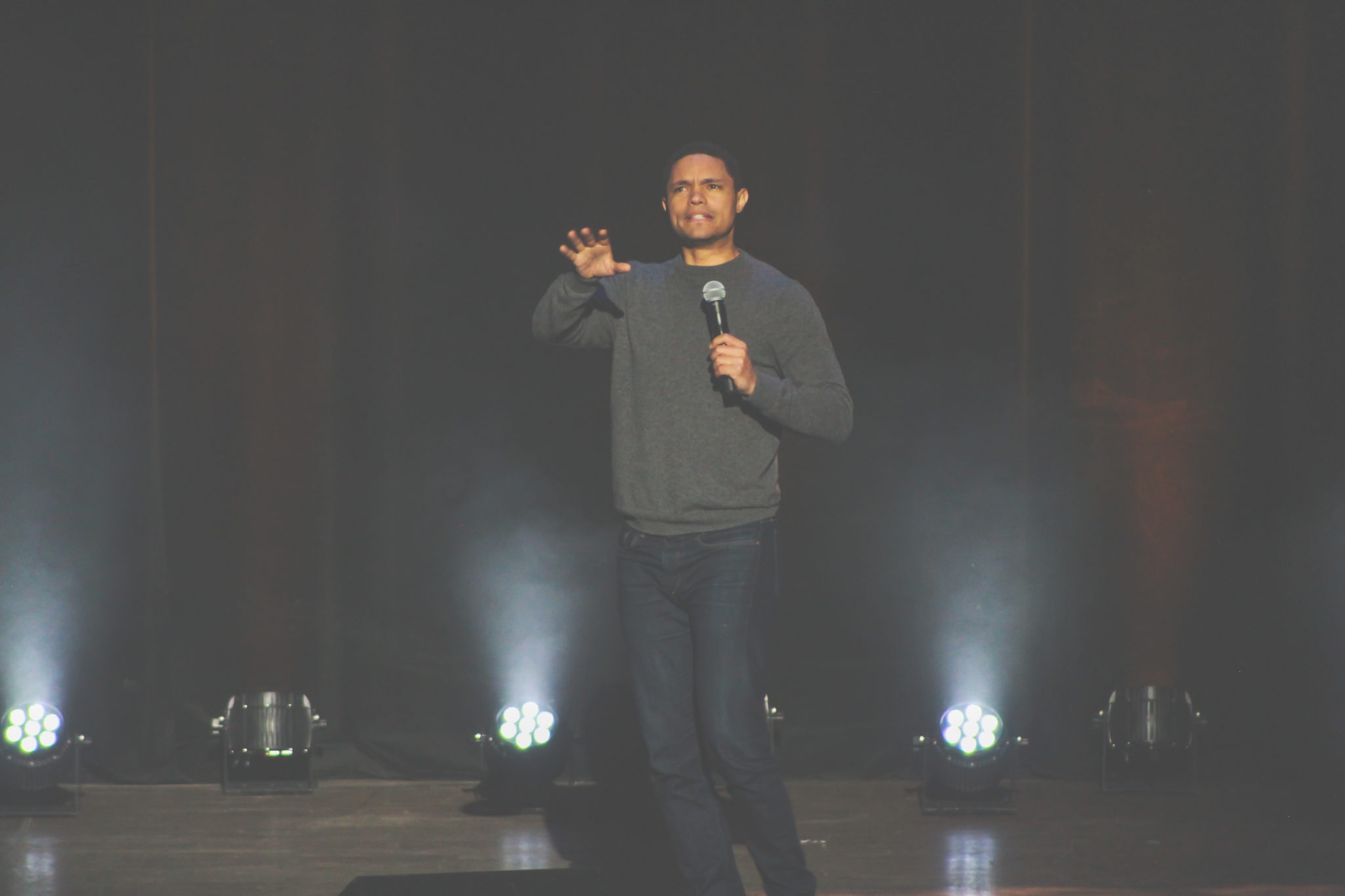 Noah started the evening with a few anecdotes about his end-of-the-year vacation to Bali, the time he interviewed Barack Obama and his first experience with tacos.

He pointed out the different meanings vacation has for people of color compared to white people. “What white people consider enjoyable on vacation are things that people of color are trying to escape,” he said. “White people love camping… They’re always all like, ‘Let’s get away from it all, there’s no water and no electricity.’” To which Trevor says that for a person of color, they worked hard to get those things and now you want them to pay for the life they want to escape? The audience was laughing uncontrollably at Trevor’s take on white people and their sense of “adventure.”

Of course having to mention immigration, he proposed that if we cannot accept immigrants into the country, then we cannot have their food either. I broke out laughing, along with the rest of the crowd, because he then said colonialism was basically a quest for white people in search of spices after a white colonizer got fed up with a “white woman’s cooking.”

What made these stories hysterical was not just his toying with racism and politics, but his hilarious impressions and accents. We were lucky enough to hear his French and Mexican accents as well as his Obama and Trump impersonations.

“Part of me thinks he might quit,” said Noah, talking about Trump. In his best Trump impression he then said, “Unlike most presidents, I did it in half the time, folks.”

He had a lot to say about Trump, but the best comment I heard was that “Donald Trump just wants to be queen” of the United States. He probably would be better equipped to be a queen instead of the leader of the free world, but Trevor said something that night I feel was the main highlight. He said that we cannot romanticize villainy when it comes to the President. “Donald Trump may amplify problems, but he is not always the cause.

After the show, I first talked to Kate Sullivan, a fourth-year electrical engineering major, and she told me she saw “a lot of old white people wearing Patagonia jackets.” I have to admit, she put that into words way better than I could have, but then she followed up with saying she thought he had a great take on racism and that “coming from a white person,” she enjoyed every minute of it.

Some other students I talked to said they felt they saw more students at this event than any other Arts & Lectures show. Armin Mahini, a fourth-year computer science major, said he thought Trevor was not unfair when it came to racism and was saying very reasonable things. Mahini felt like the audience had to hear some of those things and that “the truth just hurts sometimes.”