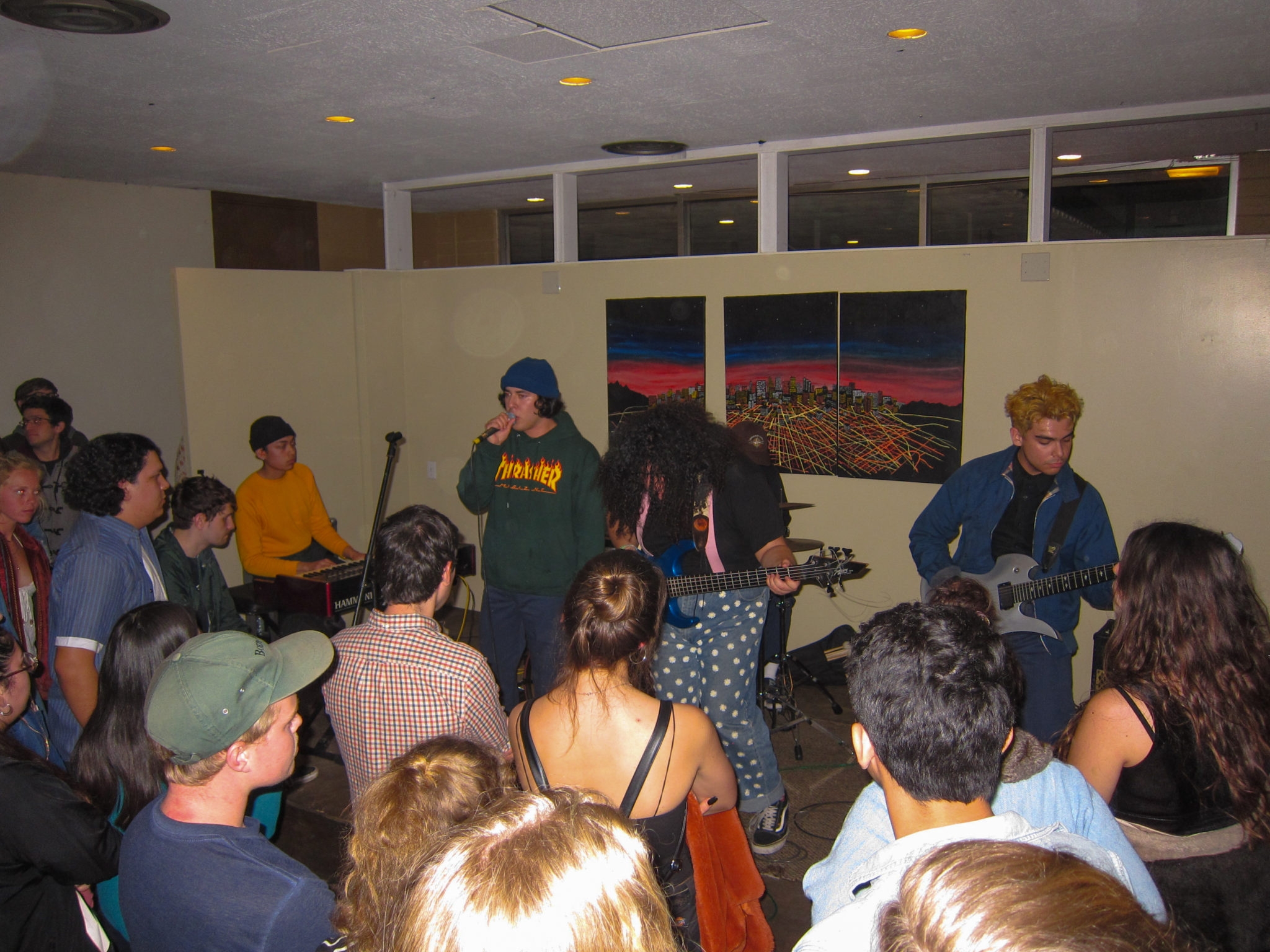 As their Facebook biography indicates, Espresso truly displayed their ability to “melt minds and cream jeans” at their performance on Monday night put on by KCSB at The Hard to Find Showspace. The lineup for the mini festival that was held inside a Christian church included Espresso, The Crudes, Pookie, Easter Teeth and Arrington de Dionyso. Espresso and The Crudes turned the crowd into a sea of moshing Old Skool Vans.

Santa Barbara native band, Pookie, coasted through their performance by playing most of the intricate and carefree instrumentals from their latest project “Fifteen Seconds of No Thank You.” Pookie performed the picturesque soundtrack to mask despair through cheerful melodies that sound like sitting by a beach at dusk. Despite the lack of crowd attendance, the engaging post-punk band, Easter Teeth, sang their track “Truckstop Fear,” which led to a couple head bangs from the crowd as band members Josh and Tim drawled out the lovestruck lyrics, “I wish I could miss you.”

For having released their album Graveled Guts just last month, The Crudes looked like rock stars head banging along to the sounds reverberating from the bass. The band has musical qualities similar to those of popular indie acts Yellow Days and Cuco, which quickly caught the attention of the crowd. The slow pace of the guitar on soulful anthem “Kaby,” led x-scribbled hands to sway in the air. The raspy “Bojangles” created a groove that placed the band’s melodies on a pedestal. The Crudes showcased a performance of the sludgy track “Piglet,” where the electric guitar meandered and could have made its way on a “That 70s Show” scene.

Most DIY bands that have carved a name for themselves in Los Angeles have utilized spaces such as The Smell and local backyard parties. Espresso has already released three projects and is currently touring their latest album, Alvin Bovin’s Big Break. The guitars swelled as the romantic ballad “Piglet’s Journey,” crooned throughout the venue, leading couples in matching Dickies to dance around as if they were the stars of an indie coming-of-age film. 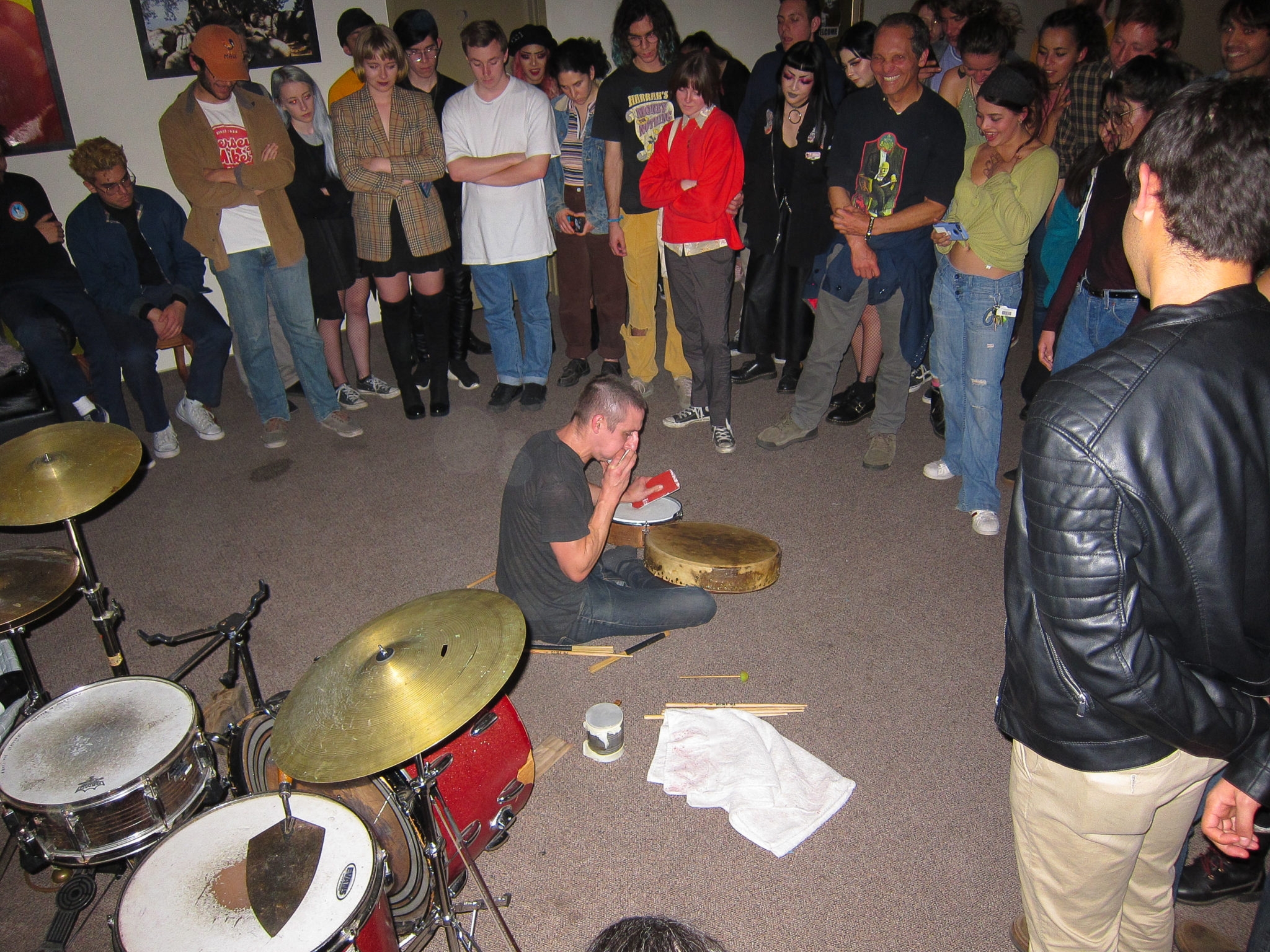 Espresso ended their set with “Space Ship, Space Dick” off their 2016 album Bobe, meanwhile affirming the startling beauty in mosh pits. Lead-singer and guitarist, Dashel Dupuy, admired the girls who were bravely entering the mosh pit.

“To all the girls who aren’t afraid to go in the mosh pit, you’re sick and I appreciate you,” he said.

The crowd started to dance as if they were in a ’70s disco party, despite the fast-paced drumming and bass melting off the walls of the venue that simultaneously acts as a church of the venue.

Third-year economics major Melissa Saavedra commented on Espresso’s ability to bring people who don’t know each other together.

“It’s crazy how a band can bring a group of people who don’t ordinarily hang out with each other to all comfortably jam out together,” she said.

On the heels of Espresso’s lively set, Washington-based Arrington de Dionyso astonished the audience with his ability to emphasize the minimal instrumentation flowing from the drums and the saxophone. By gauging the facial appearances of the crowd, I saw that they were initially put off ease by two guys who weren’t singing over King Krule melodies.

“If I could best sum up Arrington de Dionyso’s intense performance, I’d title it like Squidward’s art piece, ‘the bold and the brash.’ He was able to make sounds that aren’t conventionally beautiful and rather bold sound like something new and beautiful,” she said.

Arrington de Dionyso put the audience in a trance by pushing the envelope, as he used a water pipe to emulate the cries of his saxophone.

Dionyso’s instrumental catharsis received a standing ovation that finalized a night of groovy songs, surf beats, sax meltdowns and unexpected dynamic performances. Dionyso ended the night by pointing out the sign that accompanied his performance place that simply stated, “This Saxophone Kills Fascists.”

He concluded, “In this time, it’s important to build up the community, and we can start by just sharing music. Music is a language in itself, it’s what brought us all together.”

KCSB constantly puts on events that house the alternative DIY bands for listeners who need to let out some angst in the mosh pit, find a sense a community, and melt away to some groovy tracks.