Nor did last week’s heavy rainfall avoid the I.V. streets, as downpour from Jan. 8 to Jan. 10 amounted to over 2.5 inches of precipitation and forced most to stay indoors.

Lost in the thick of smoke and water over the past month was I.V.’s homeless population. Many homeless individuals were stuck without masks to protect them from the harmful air or roofs to later shield them from the rainy conditions. 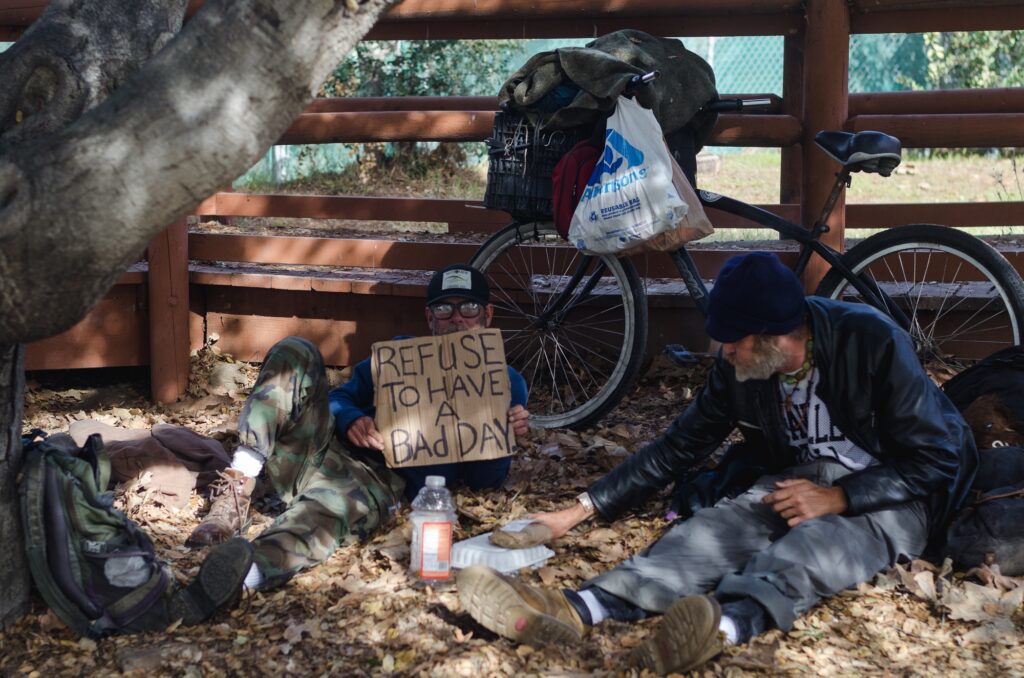 Homeless residents in Isla Vista faced extreme weather conditions without permanent shelter during the
Thomas Fire and the recent rainfall. Many experienced lung problems from the smoke and ash in the air. Will Tran/Daily Nexus

“It was horrific,” said Darren Schmitt, a 46-year-old homeless local. Schmitt regularly sleeps on a cushion behind Embarcadero Hall, tucked in a corner out of sight of the students passing by.

When the air quality in I.V. plummeted in the wake of the Thomas Fire, most students fled the neighborhood for their permanent residences. Schmitt stayed on the streets.

“I watched ash drop all night here,” he said. “Everyone else was wearing [the masks], but I didn’t, so I felt like puking.”

Eventually, a group of good Samaritans handed him a mask. But Schmitt, uninformed of just how bad the air had gotten, didn’t feel like wearing the mask all day. Believing his mask to not be fully effective, he discarded it.

Father Jon-Stephen Hedges, volunteer chaplain at the Santa Barbara Sheriff’s Office, said events like these are far more than unfortunate for the “house-less” of I.V. — they’re life-threatening.

“You take someone who’s got respiratory problems to begin with — many of them are smokers — and it’s desperation,” Hedges said.

Some of those seeking shelter experienced asthma attacks, coughing and hacking as they finally arrived to an environment with cleaner air.

Others suffer from lung-related ailments like Chronic Obstructive Pulmonary Disease or emphysema. Hedges himself felt pain in his lungs, he said, though he had a home to return to.

Homeless locals are allowed entry to a Warming Center at the University United Methodist Church on Camino Del Sur. Those straying in can receive dinner and blankets.

“We’ve been doing this for 10 years, serving our community and making sure our friends without a home have a place to go to when it’s cold and wet outside,” said Ed Wesson, operational manager for the Freedom Warming Centers of Santa Barbara.

The Warming Center opens at 6:00 p.m. and closes at 6:00 a.m. the next day. At that time, Schmitt said, those who stayed overnight are told to leave, regardless of the weather outside.

“It doesn’t matter if it’s pouring rain,” Schmitt said. “We’re sent out onto the street.”

In the case of last week’s rainfall, Schmitt escaped to an underground garage in Goleta and hid until the storm cleared.

“When rain like that comes, we get wet, and all our stuff gets wet,” added another local, who would identify himself only as Jeffrey.

For decades of living in I.V., Jeffrey has made money by fishing at Goleta Beach and collecting recyclables. Days of heavy rain get in the way of his ability to fish, leaving him with little recourse for money.

Not all the homeless despaired under the conditions. Another local, who gave his name only as Danny, scoffed at the idea that he was under distress.

“We live our lives outdoors and fight through everything,” Danny said. “Rain and fire don’t scare me.”

Each spring, the Central Coast Collaborative on Homeless (C3H) releases an annual census on nationwide homelessness. The 2017 account, published in March, found a population of 26 homeless I.V. locals, the Nexus reported. Multiple homeless people said they were suspicious of the figure, agreeing that it felt too low. Hedges refuted the number altogether.

“I don’t believe what happened with that,” Hedges said. “I know the numbers, and the count was just wrong.”

If census-takers wanted to get an accurate homelessness count, Hedges said, they could attend free dinners served by local churches. When the 2010 census was taken, he rallied homeless people to sign up. If people were to stand up and be counted, Hedges said, it would make for a telling political statement.

If the “powerful” were to know the extent of the problem, he said, there could one day be a difference.

With the weather cleared, the homeless are free to go about their days on the I.V. streets. Some roam on their bicycles, others hang out at a stone bench on Pardall Road that they’ve dubbed “the bedrock.” Schmitt and Jeffrey sit on the ground at Anisq’Oyo Park and share a jar of peaches. When he reflects on the past month’s trying conditions, Jeffrey is animated but maintains that it doesn’t faze him.

“We do have a home,” he said, lying horizontally on the ground and tucking his backpack beneath his head. “All of us out here depend on each other.”

He travels light, but does carry a cardboard sign he likes to show I.V. residents walking by. It boldly reads, “Refuse to have a bad day.”

A version of this article appeared on p.1 of the Jan. 18 print edition of the Daily Nexus.

Can we put them to work picking up after the children at UCSB? The kiddies get looked after, and the bums get a job. Win-win.