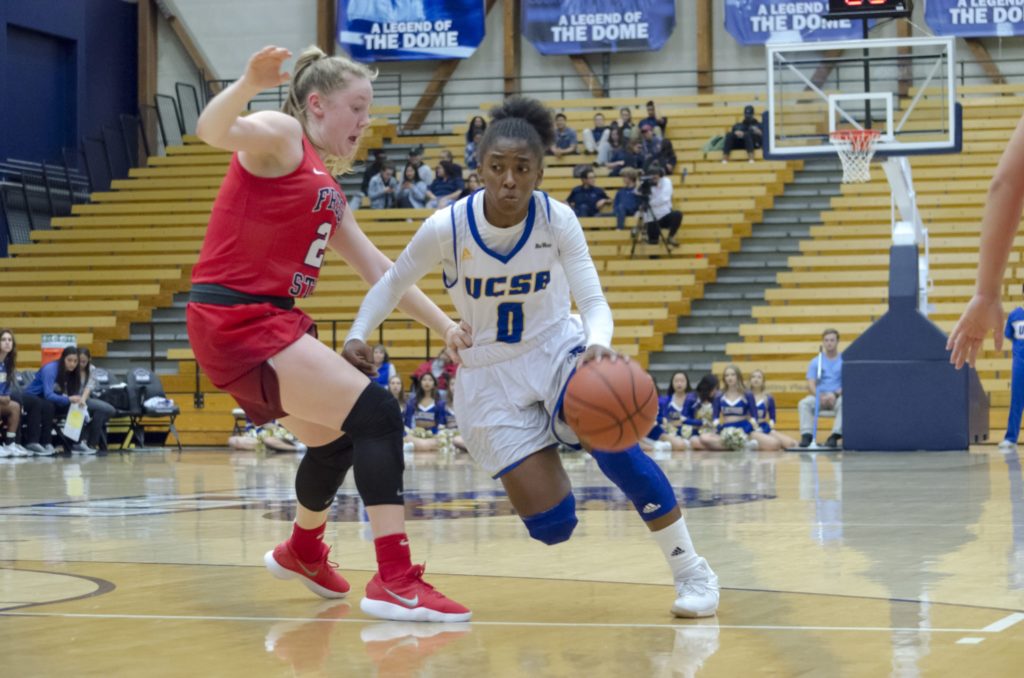 The UCSB women’s basketball team will aim to turn its season around Friday when they take on the San Diego State Aztecs. After being forced to move the location of the LMU game Monday due to conditions created by the Thomas Fire, UCSB will return to the Thunderdome to host SDSU as long as air quality continues to improve in the area.

Following their close loss to LMU on Monday night, the Gauchos have now lost nine straight ball games. Sitting with a record of 1-9, Santa Barbara has plenty of room as well as opportunity left for improvement.

Despite their poor record early on, the Gauchos have two games left to hone in their skills prior to beginning conference play. SDSU will visit the Thunderdome Friday looking to bounce back from a loss of its own, as the Aztecs fell to Santa Clara last week.

The Aztecs are above .500 thus far, holding a record of 6-4 after opening the season with a three-game win streak. In comparison to the youthful Santa Barbara lineup, the SDSU starters are predominantly seniors, with guard McKynzie Fort leading the charge for the Aztecs.

Fort is a 5’9 guard and has led her team in scoring in 7 of SDSU’s games this season, averaging team high numbers in points as well as rebounding. In addition to her 16.4 points per game, Fort averages 5.4 boards per contest.

While the Aztecs will certainly rely on production from their seniors, Santa Barbara will look to build off the performance against LMU Monday.

Disregarding the final score, the Gauchos outscored the Lions in the second half and found success feeding the ball to Drew Edelman, who finished with 21 points and 8 boards on an efficient 9-13 shooting.

When Edelman is having those types of games, it seems the Gauchos have an easier time on offense; however, Edelman’s success in the paint may simply be the result of Santa Barbara running its offense the way head coach Bonnie Henrickson desires.

Henrickson has repeatedly stressed the need to swing the ball and find the open player, whether that equates to an open three or a feed inside.

With two true freshman point guards in Danae Miller and Sarah Bates, Henrickson’s offense has taken time to be carried-out correctly, but UCSB is continuing to show glimpses of efficient ball movement.

The only other player on the Santa Barbara roster averaging double-digit scoring is redshirt junior Sarah Porter. Porter is averaging 10.4 points a game despite shooting just 35 percent from the field.

With almost every Gaucho on the UCSB roster playing at least 10 minutes per contest, each game brings the opportunity for players to give their team that necessary spark either off the bench or from the opening buzzer.

Facing SDSU will be a good opportunity for the Gauchos to keep translating what they’ve been improving upon in practice to real-game scenarios against a more appropriate opponent than a top-ten team like UCLA.

Showing progressive improvement, Santa Barbara has worked to cut down its turnover numbers, which have plagued the Gauchos much of this season.

Averaging 16.7 turnovers per game, the Gauchos limited themselves to losing the ball only 11 times against LMU, their lowest number since the regular season opening win at Northern Arizona.

Furthermore, UCSB showed more intensity on the defensive end facing LMU, recording 8 steals and forcing 19 turnovers. If Santa Barbara is able to build off of these improvements, the Gauchos may also solve their issue of slow starts.

In their past three matchups, the Gauchos have failed to score more than 11 points in each first quarter, so Henrickson’s team will likely aim to get off to a better start against SDSU on Friday.

Last year, the Aztecs hosted Santa Barbara and won by a margin of 14, so Friday’s matchup will also offer the Gauchos a chance at redemption.

The action between UCSB and SDSU will tip off at 7:00 pm on Friday, December 22 at the Thunderdome.