The Daily Nexus
Sports
Streaking Gauchos Head South To Take on Struggling Trojans
December 16, 2017 at 5:04 am by Jorge Mercado

Following seven straight victories, it makes sense that the UCSB men’s basketball team is feeling good about themselves. However, one of the Gauchos biggest tests come this Sunday as they travel south to take on USC, a team they lost 96-72 last season.

Fortunately for Santa Barbara, last season is completely behind them. Last year, UCSB was 1-9 through ten games, this year it comes into the Galen Center boasting an 8-2 overall mark thanks to new Head Coach Joe Pasternack who is off to the best start for a first year coach in program history.

In collegeinsider.com’s Mid-Major Top 25 poll, UCSB debuted at No. 21 on the list, just one spot below fellow big west opponent UC Davis.

For the Trojans, the 2017-18 campaign has been very inconsistent. USC came into the season ranked in the top 10, however, they have since fallen out of the AP Top 25 completely following losses in three of their last four.

The Trojans have already played another Big West opponent this season in Cal State Fullerton who they handily beat 84-42 in their season opener. USC currently holds the all-time series advantage beating UCSB 13 times in 14 contests. 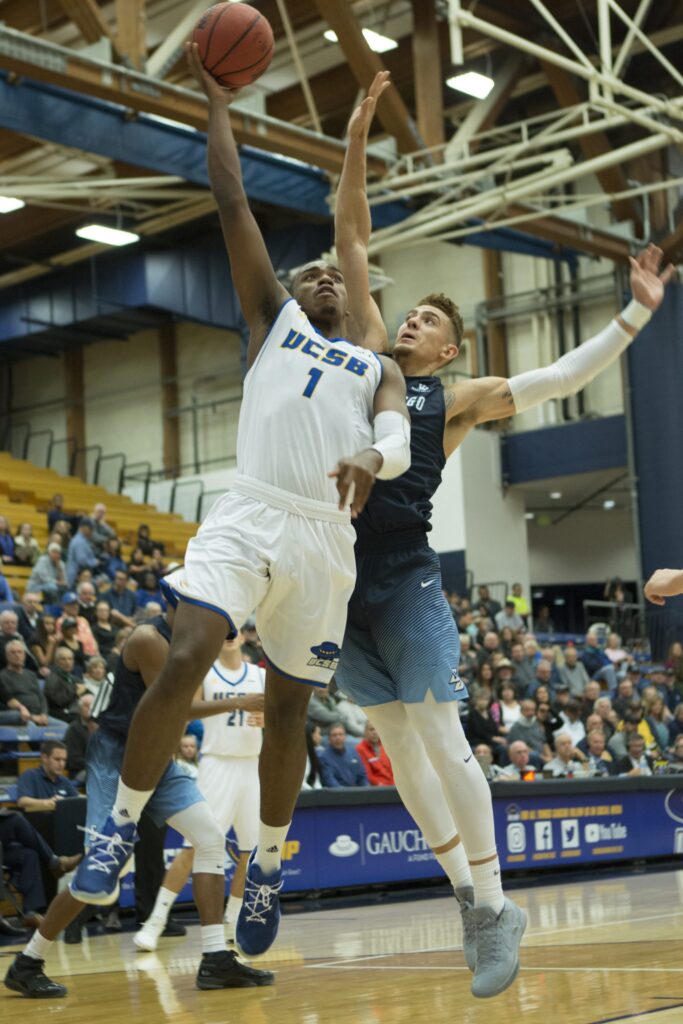 Sunday’s game will be a great opportunity for the Gauchos to have a statement win on their resume. Currently, UCSB has had impressive victories but a win against a foe from a power-5 conference would be a validation of just how far this team has come in just one year.

In order for Santa Barbara to pull off the road upset, then it will need spectacular performances from sophomore Max Heidegger and graduate transfer Leland King II.

Whereas last year Heidegger averaged just 7.6 points per contest on just 27 percent shooting, the guard has completely transformed his game currently sitting as the sixth leading scorer in the NCAA.

Averaging 23.4 points per game this year on a very efficient 47 percent from the field, Heidegger has become the Gauchos number one scoring option. He has also been spectacular from deep as well shooting nearly 44 percent. In six of his last eight matches, Heidegger has scored more than 20 points.

Along with Heidegger, King II has been a highly welcomed addition to the UCSB squad. In his last game against Montana State, the forward scored a career high 25 points.

This season King II has averaged 19.2 points per contest, but just as important, he is the team’s leading rebounder averaging 10 boards per game. His 10 rebounds per game is the 22 highest mark in the NCAA.

In his last five contests, he has accumulated double-doubles averaging 20.2 points per game and 12.4 rebounds per contest.

In general, as a team, UCSB has been incredible during this seven-game stretch outscoring their opponents by nearly nine points per contest. They are currently the highest scoring team in the Big West averaging 76.7 points per game.

All that being said, USC is still going to be a very tough team to beat. As a team, the Trojans are averaging 77.4 points per contest while holding their opponents to just 68.8 points. USC is also 4-1 at the Galen Center this season and have lost only four of their last 22 contests at home.

The Trojans are led by senior guard Jordan McLaughlin who is currently averaging 13.8 points per game and 4.3 rebounds. He also leads the Pac-12 in both assists (6.8) and steals (2.3).

McLaughlin has been one of the best players in program history as he ranks second on USC’s all-time assists list with 511 and sixth in steals with 159.

Along with the senior, juniors Chimezie Metu and Bennie Boatwright will be contributing factors as well. Wheras the Gauchos leading rebounder King II stands at 6’7, Metu and Boatwright are 6’11 and 6’10, respectively.

Despite the Gauchos being the hotter team, there is no doubt USC is still a heavy favorite. According to ESPN’s Basketball Power Index, USC is 86.2 percent likely to win while also being favored by 12.5 points.

Overall, however, the game is played on the court, and for the past seven games, and in reality, the whole season, UCSB has put together some wonderful performances. But it will need to play beyond that to beat USC, a team it hasn’t beaten since 2002.

The Gauchos will take on the Trojans at 5 p.m. on Sunday, December 17 at the Galen Center. The match will also be streamed on the Pac-12 network.